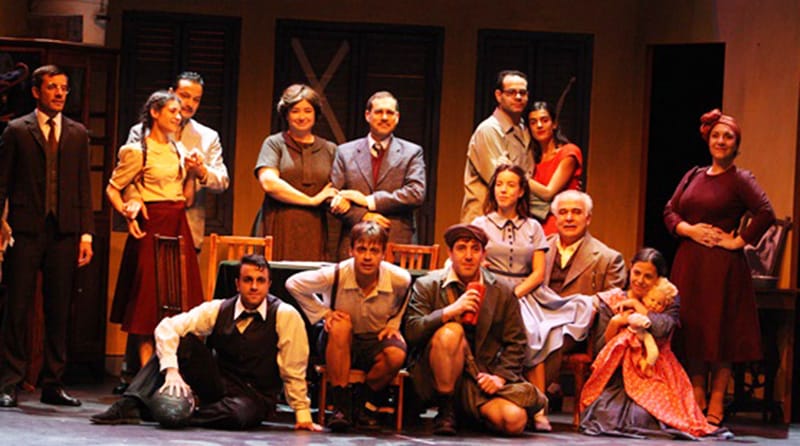 Calling all parents, this one’s for you! With Christmas lights and decorations already going up the kids are probably beginning to feel a spot of seasonal spirit. Which probably equates to fairly constant present-mentioning, a mad desire for the start of the holidays, and general restlessness. But we’ve got you covered: if the Christmas itch has struck your progeny, there’s nothing like a tremendous theatrical treat to keep them in check… This coming month, we’ve got five excellent kids’ plays to keep your little terrors from climbing the walls. Admittedly, all five are in Greek, most are in Nicosia and two are heavily Xmas-themed – which might actually work the other way, but it’s worth a try, right?

Petros’ War has been on stage every Sunday morning since mid-October and is set to continue its Nicosia run until December 17, while taking in the Larnaca Municipal Theatre on November 18, the Markideio Theatre in Paphos on November 26, and the Rialto in Limassol on December 2. Presented by Stage 018 of the THOC group, this kids’ play is based on the novel of the same name by Alki Zei, and directed by Takis Tzamargias. Basically, it’s the story of our protagonist – Petros – a young Athenian boy who dreams of “heroes, shields, swords and victories”. But when he’s thrust into the middle of a very real conflict, waking on the morning of October 28, 1940 to the sounds of gunfire, his views begin to change. Along with his parents, sister, grandfather (and his pet turtle, Theodore) this is a young boy’s take on life during war, occupation and resistance: a delightful tale of very real adventures that’s bound to make young audiences think twice.

The Owl Who Wanted It All comes to us courtesy of the Little Worry People theatre and it too has an important message to share with children. Taking place at The Little Worry People Art and Drama Studio, Nicosia, at 11am on both November 19 and December 10, and billed as “a creative performance whose goal is to pass on the value of gratitude to children,” this is a play which tackles the issue of what really matters… “It’s nice to be around material things, we all like it,” organisers state, “but in life there are also things that are more important – love, friendship, respect and so many other invaluable feelings.” Through the magical adventures of a greedy, watch-coveting owl, the play purports to highlight happiness over material gain, augmented by “theatrical effects and songs and many surprises, bringing new knowledge and experiences to the audience.”

Following on from their successful autumn production of The Tin Soldier in 2016, Theatro Dentro are returning to the stage this season with Clara + Pipis = Dance Forever. This is a performance with a difference: “A great adventure that will make young and old dance!” according to organisers. Billed as “An educational, romantic and modern fairy tale, full of colours, music, joy and dance,” Clara + Pipis is “mainly aimed at children, respecting their intelligence and the complexity of their emotions”, and will be taking place twice on both Saturdays and Sundays at the Theatro Dentro premises in Palouriotissa, Nicosia until December 7.

Our final two kids’ performances are a nod both to the festive season and traditional Christmas tales. Taking place every Sunday at the Pantheon in Nicosia and running until November 26, Act Theatre’s Ice Tangles is an adaption of a very well-known seasonal story… Based on Hans Christian Andersen’s The Snow Queen and directed by Elia Ioannidou, this is a play which “aspires to enchant the audience with its unforgettable characters and music.” Running for a couple of months longer, A Christmas Carol by Theatro Ena – Dickens’ classic tale of the miserly Scrooge, and the Ghosts of Christmas Past, Present, and Future – is bound to be a hit with young and old alike. Directed (and adapted for the stage) by Andreas Christodoulides, this much-loved story will be playing at Theatro Ena, Nicosia every Friday, Saturday, and Sunday until January 14. Ensuring that all those festively restless kids out there have something to keep them entertained both pre and post hols! The countdown to Christmas, it seems, has begun…

Denmark ‘will stand up to Ireland physicality’