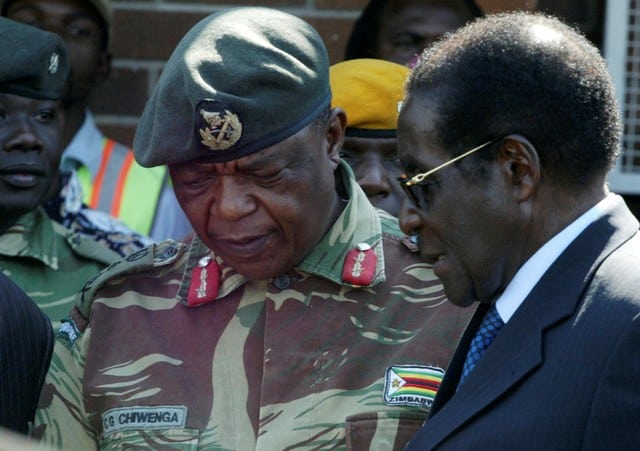 Four tanks were seen heading towards the Zimbabwe capital Harare on Tuesday, witnesses said, a day after the head of the armed forces said he was prepared to “step in” to end a purge of supporters of the vice president who was sacked last week.

A Reuters witness saw two other tanks parked beside the main road from Harare to Chinhoyi, about 20 km (14 miles) from the city. One, which was pointed in the direction of the capital, had come off its tracks.

Witnesses said the tanks turned before reaching Harare, heading towards the Presidential Guard compound in a suburb called Dzivarasekwa on the outskirts of Harare.

“There were about four tanks and they turned right here, you can see markings on the road,” one witness on the Chinhoyi highway said pointing to a road that links up to the Presidential Guard compound that houses the battalion that protects the president.

President Robert Mugabe, the only leader Zimbabwe has known in 37 years of independence, was chairing a weekly cabinet meeting in the capital on Tuesday.

The capital appeared calm and there were no troops in the city as business continued normally.

In an unprecedented step, the head of the armed forces, Constantino Chiwenga, openly threatened to intervene in politics on Monday, a week after Mugabe fired Vice President Emerson Mnangagwa, long seen as 93-year-old Mugabe’s likely successor.

Mnangagwa, a veteran of Zimbabwe’s 1970s liberation wars, was popular with the military, which viewed his removal as part of a purge of independence-era figures to pave the way for Mugabe to hand power to his wife Grace, 52.

“We must remind those behind the current treacherous shenanigans that, when it comes to matters of protecting our revolution, the military will not hesitate to step in,” Chiwenga said in a statement read to reporters at a news conference packed with top brass on Monday.

Grace Mugabe has developed a strong following in the powerful youth wing of the ruling party. Her rise has brought her into conflict with the independence-era war veterans, who once enjoyed a privileged role in the ruling party under Mugabe, but who have increasingly been banished from senior government and party roles in recent years.

Neither the president nor his wife responded immediately to the general’s remarks, but on Tuesday the head of ZANU-PF’s youth wing accused the army chief of subverting the constitution.

“Defending the revolution and our leader and president is an ideal we live for and if need be it is a principle we are prepared to die for,” Kudzai Chipanga, who leads the ZANU-PF Youth League, said at the party’s headquarters in Harare.

The rising political tension in the southern African country comes at a time when it is struggling to pay for imports due to a dollar crunch, which has also caused acute cash shortages.

Zimbabwe’s state media refrained from publishing Chiwenga’s statement. The Herald newspaper, which had initially posted some of Chiwenga’s comments on its official Twitter page on Monday, deleted the posts without explanation.

While Mugabe’s rule has been anchored by support from the military, the ageing leader does not tolerate public challenges.

As Mugabe has systematically dismissed veterans of the liberation struggle from party posts, the top echelons of ZANU-PF are now stacked with officials who did not fight in the independence war.

Mugabe could for the first time go into next year’s elections without the active support of the military. War veterans broke ranks with him in 2016 and have vowed to form a broad front with the opposition to challenge his long rule.

MTN: The network with the widest 4G coverage in Cyprus