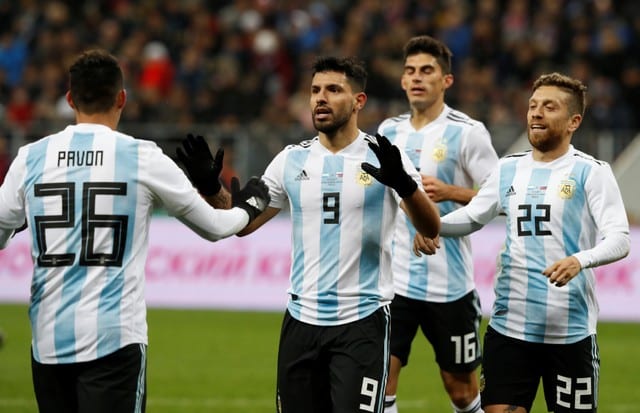 Argentina striker Sergio Aguero collapsed in the dressing room at halftime before they lost 4-2 to fellow World Cup qualifiers Nigeria after taking a two-goal lead in a friendly in Krasnodar, Russia on Tuesday.

The Argentine Football Association (AFA) said in a statement that Aguero, who scored in the first half, was taken away for routine examinations but added: “The player is well”.

His Premier League club Manchester City said the 29-year-old Aguero had been cleared by doctors to return to England as planned after he suffered what they called “a dizzy spell”.

“Sergio never lost consciousness, and was taken to hospital for precautionary medical checks,” City said on their official website (www.mancity.com).

Aguero will be assessed by Manchester City’s medical team ahead of this weekend’s Premier League trip to Leicester City.

Argentina coach Jorge Sampaoli rested Lionel Messi following the 1-0 win over next year’s World Cup hosts Russia on Saturday and it seemed that they could cope without him.

Ever Banega curled in a free kick, awarded after Nigeria goalkeeper Daniel Akpeyi picked the ball up outside his area, in the 28th minute and Aguero finished off a sweeping counter-attack eight minutes later.

First, he emulated Banega by scoring from a free kick on the stroke of halftime and then set up the equaliser by pulling the ball back for Alex Iwobi to net seven minutes after the re-start.

The Super Eagles took the lead two minutes after that when Brian Idowu sidefooted home from the edge of the area to finish off a counter attack.

A superb goal by Iwobi completed the comeback in the 73rd minute as he collected the ball, slipped it between Javier Mascherano’s legs and fired past Agustin Marchesin.

Argentina staggered through their World Cup qualifying campaign, only clinching their place at the finals with a 3-1 win in Ecuador in their final match.

“My biggest worry was the way the team played when we were behind. I know we are capable and have the individual talent to be able to get out of these situations and I’m worried about what happened tonight.

“We played an incredible first half but we lost our way in a match which could confuse a lot of people.”

Why are health experts so concerned about drug resistance?