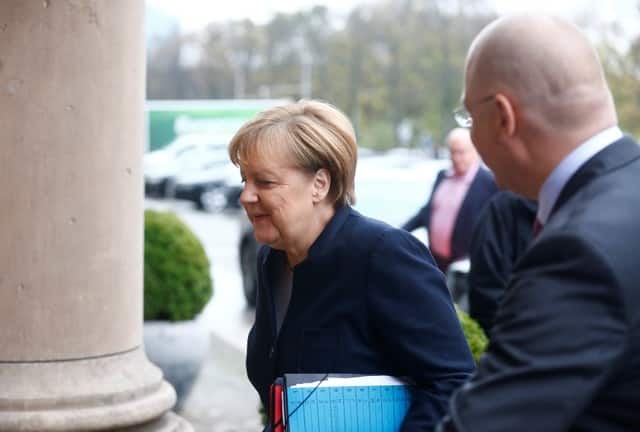 German parties meet on Wednesday on the hot issue of immigration with sides divided on whether to limit migrant numbers and with only one day left to conclude exploratory talks for forming a new coalition government.

Chancellor Angela Merkel wants the exploratory talks to end on Thursday, when German media expect her to press all sides to strike a compromise before moving to formal negotiations.

Merkel, 63, is trying to forge an unlikely alliance of her conservatives, the pro-business Free Democrats (FDP) and the ecologist Greens – a combination untested at national level – to allow her to govern for a fourth term as chancellor.

She needs the new team to work to head off fresh elections that mainstream politicians fear could see the far-right Alternative for Germany (AfD) make further gains after it surged into parliament for the first time after a September election.

On Wednesday, negotiators will try to narrow their differences on immigration – the issue that cost Merkel support in September’s national election after her 2015 decision to leave German borders open to more than 1 million migrants.

At stake is a plan by Merkel’s conservative bloc to cap the number of people Germany will accept per year on humanitarian grounds at 200,000 – a limit the environmentalist Greens reject.

“There must be a limit,” Volker Bouffier, conservative premier in the western state of Hesse, told ARD television. “We say 200,000 is a reasonable level, if one looks at recent years. But we have not yet achieved our objective.”

The parties are also at odds over the number of foreigners who qualify to join relatives granted asylum in Germany. Asked if negotiators could overcome their differences at Wednesday’s meeting, Bouffier replied: “I am confident. We will see.”

Businesses are eager for the parties to reach a deal.

“We believe that all parties involved have understood the urgency to reach an agreement by Christmas,” said Dieter Kempf, chief of Germany’s largest industry association, the BDI.

He added that it was important to avoid a longer period of political uncertainty since this would be “poison” for the companies’ willingness to invest.

The mood music coming out of the talks has been mixed. Late on Tuesday, Merkel and other senior conservatives drank wine with Greens co-leader Katrin Goering-Eckardt, conservative party sources said.

But the coalition negotiations are complicated by the dynamics within the conservative bloc, which comprises Merkel’s Christian Democratic Union (CDU) and their Bavarian sister party, the Christian Social Union (CSU).

The CSU, worried about losing support in a state election next year, is uncompromising on immigration – a risk for the three-way ‘Jamaica’ coalition, so-called because the parties’ colours match those of the Caribbean country’s flag.

CSU Secretary General Andreas Scheuer said his party was ready to compromise, but added: “It is becoming ever more clear that Jamaica is not a pleasure trip … And some members of the expedition group have not yet set their compass properly.”

FDP negotiator Volker Wissing questioned finance ministry estimates that the next government will have some €30 billion available for additional measures over the next four years, arguing €40 billion would be available.

The FDP wants to prioritise tax relief. Wissing also played down the idea of expanding the role of the eurozone’s rescue mechanism, the ESM, which some politicians want to turn into a more powerful European Monetary Fund.

“An expansion of the stabilisation programme is definitely not possible with the FDP,” he told ARD.

Photovoltaics to be installed in hundreds of schools