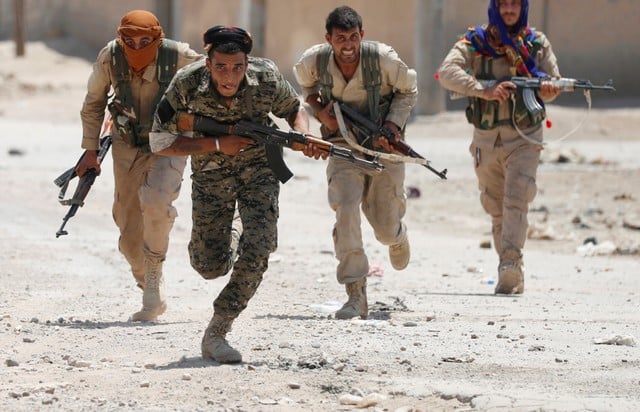 File photo: Kurdish fighters from the People's Protection Units (YPG) run across a street in Raqqa

Syrian Kurdish leaders voiced support on Wednesday for a longer-term role for US forces in Syria once Islamic State is defeated, after the United States signalled it would not pull out before there was progress towards a political solution.

Comments by US Defence Secretary Jim Mattis on Monday have drawn heavy criticism from the Iran-backed Syrian government, which says Washington is making up a new excuse for keeping its “illegal occupation” forces in Syria. Limiting Iranian influence in Syria and Iraq is a key US aim.

Syrian Kurdish groups have emerged as the main partner on the ground for the US-led coalition fighting Islamic State in northern and eastern Syria, areas which the Syrian state and Iran have vowed to take back.

Kurdish fighters, with Arab allies, US advisers and coalition jets, have driven Islamic State from swathes of territory including their former headquarters in Raqqa city.

The Kurdish YPG militia and its political allies have carved out autonomous cantons in the north, and now control nearly a quarter of Syria. Their influence angers neighbour Turkey, which considers the YPG an extension of the banned Kurdistan Workers’ Party that has fought a decades-long insurgency on Turkish soil.

The main Syrian Kurdish political party, the PYD, welcomed a longer-term US role in Syria. The US presence should continue until there was a political solution to the Syrian crisis which erupted in 2011, it said.

In a written message to Reuters, the PYD’s co-chief, Shahoz Hasan, agreed this would be beneficial.

Senior Syrian Kurdish politician Fawza Youssef said a US role would be very important for the future.

“The United States and the coalition forces played a major role in fighting Daesh, and to reach a fair political settlement, we see a need for international guarantees,” said Youssef, a senior member of the Kurdish-led authority running the cantons in northern Syria.

She pointed to an increase in humanitarian aid to northern Syria by Washington and the coalition since the Kurdish-led Syrian Democratic Forces (SDF) captured Raqqa – a sign of a widening US role.

Turkey said on Monday the United States had 13 bases in Syria and Russia had five.

As all sides in Syria battled Islamic State, the US-backed forces have mostly avoided direct confrontation with the Syrian government, backed by Iran and Russia. But Iranian and Syrian officials are now signalling their intention to take back areas captured from IS by the SDF.

Syria‘s main Kurdish groups say they want a federal system for the whole country, and hope for negotiations with Damascus to shore up their autonomous rule. Their territorial grip has expanded since joining forces with the United States to fight IS, though Washington opposes their autonomy plans.

Mattis described this week a role for American troops long after Islamic State militants lose control of all the territory they hold.

Mattis said the US military’s longer-term objective would be to prevent the return of an “ISIS 2.0”.

But he also suggested that US forces aimed to help set the conditions for a diplomatic solution in Syria. “We’re not just going to walk away right now before the Geneva process has traction”, he said, a reference to UN-backed peace talks.

The US-led coalition has repeatedly said it does not seek to fight Syrian President Bashar al-Assad’s military.

In response to the Mattis comments, the Syrian government said on Tuesday that Washington was presenting a new excuse to keep its forces in Syria by linking this presence to a political settlement, having previously said its goal was to fight IS.

Foreign ministry comments affirmed the government’s position that the presence of U.S. and other forces in Syria without government approval was an act of aggression.