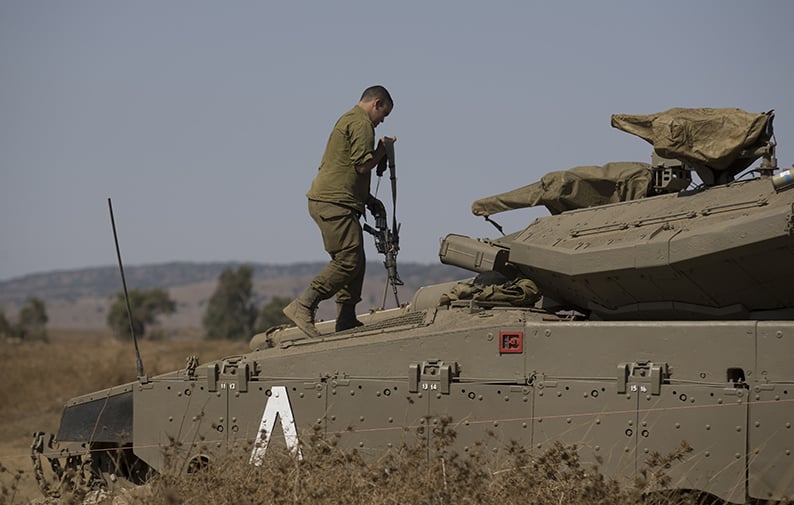 An Israel soldier takes part in a military drill simulating military conflict with Iran and Hezbollah, near the Israeli-Lebanon border in September

“When all the Arabs and the Israelis agree on one thing, people should pay attention. We should stop this Iranian takeover,” said Israel’s Prime Minister Benjamin Netanyahu last month. So we’re paying attention now, and we even know where the next war will start: Lebanon.

That seems unfair, as Lebanon’s last civil war lasted 15 years, killed around 200,000 people (out of a population of only four million), and only ended in 1990. Couldn’t they hold this one somewhere else? Unfortunately, no. All the other venues are taken.

Iraq is still fully booked. The fight against Isis is almost over, but the struggle between the Arabs and the Kurds has only just got started again. It never really stops for long.

Bashar al-Assad’s forces, the Russians, and Shia volunteers from Iran and Lebanon are winning the war in Syria, but it will be at least another year before they suppress all rebel resistance.

Yemen’s airspace is too congested, with Saudi, Emirati, Kuwaiti, Jordanian and Egyptian planes bombing the living daylights out of the Houthi rebels who hold most of the country (and anybody else who happens to be nearby). No real room for another war there.

Both Saudi Arabia and Israel want to take Iran down a peg or two, and their efforts to get the United States to do it for them have not yet succeeded. Trump is not opposed in principle, but his current obsession is North Korea’s Kim Jong-un.

So the war will have to be in Lebanon, at least at the start. The big Shia militia that controls southern Lebanon, Hezbollah, is closely allied to Shia Iran, and it’s a permanent nuisance along Israel’s northern border, so it’s a suitable place to start rolling back Iran’s influence in the region.

Lebanon is a particularly good choice from Saudi Arabia’s point of view because it’s the Israelis who would have to do the actual fighting there. (Saudi Arabia does not share a border with Lebanon.) But if Crown Prince Muhammad bin Salman is really serious about curbing Iran’s power, his own troops are eventually going to have to take on the job of cleansing Syria of Iranian influence.

You only have to say that sentence aloud to realise that this project is going to end in tears for the Saudis, the Israelis and (if they get sucked into it) the Americans. There is no way that the inexperienced Saudi army is going to drive battle-hardened Hezbollah and Iranian militia troops out of Syria.

Sunni Arab leaders and Israel’s prime minister have talked themselves into the paranoid delusion that Iran has a grand plan to establish its domination over the whole region and must be stopped by force of arms.

First Iran established close links with the Shia political parties and militias that now dominate Iraq. Then it crossed Iraqi territory to save the Shia ruler of Syria from a revolt by the Sunni majority in that country. Next was distant Yemen, where the Shia tribes of the north, the Houthi, overran most of the country with Iranian help. And now the Shia militia Hezbollah has gained a powerful position in the government of Lebanon.

If the Sunnis don’t stop the Iranians now, they’ll all be enslaved. Or something of that sort.

Nonsense. It was George W Bush who overthrew the centuries-long rule of the Sunni minority in Iraq on the lying pretext that Saddam Hussein was developing ‘weapons of mass destruction’. The Shias took power in Iraq in a free election, and as the only Shia-majority country in the Arab world they naturally sought a close relationship with Shia Iran.

This made it easy for Iranian volunteers and weapons to move across Iraq and help Bashar al-Assad resist an assault on his rule by Sunni extremists. The Hezbollah militia, which represents the large Shia minority in Lebanon, also went to Assad’s help, but you can hardly portray this as Shia expansionism.

There is absolutely no evidence that the Houthis in Yemen are getting any material assistance from Iran. They are not even Iranian “proxies” in any meaningful sense of the word. They are Yemeni tribes who happen to be Shia, engaged in a typical Yemeni tribal power struggle.

A great many people will die for nothing if the full-scale Sunni-Shia war that Saudi Arabia (and Netanyahu) currently envisage actually gets going. But Lebanese Prime Minister Saad al-Hariri’s resignation a week ago, in which he denounced Hezbollah’s presence in the government – delivered not at home but in Saudi Arabia – may have been the starting gun for the war.

Our View: UDI irrelevant as north becomes a Turkish province