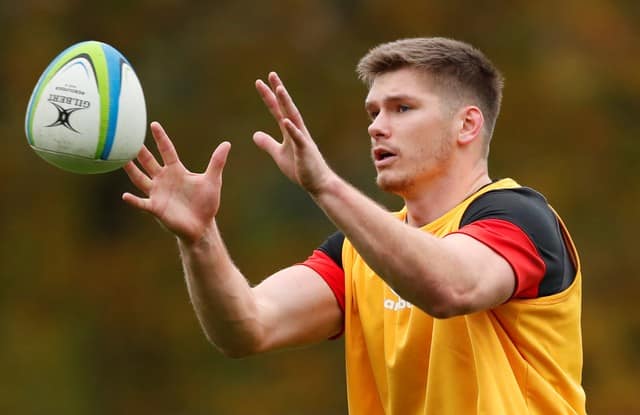 Owen Farrell, shortlisted again this week for the world player of the year award, comes in at inside centre

Owen Farrell, Jonny May and Joe Launchbury will start for England against Australia on Saturday, with Anthony Watson switching to fullback and Maro Itoje named among the replacements by coach Eddie Jones on Thursday.

After a slow-paced victory over Argentina last week and only Samoa to come after this weekend, Jones was always likely to return to his strongest-looking side.

That will always include Farrell, shortlisted again this week for the world player of the year award and who comes in at inside centre having been rested much against his will last week. He teams up again with flyhalf George Ford and outside centre Jonathan Joseph, with Henry Slade dropping to the bench.

May has recovered from injury to start on the right wing with Watson starting at fullback, where he played for an hour against Argentina after Mike Brown went off with concussion which has ruled him out of Saturday’s game.

With Elliot Daly on the other wing Jones will field a back three full of pace and counter-attacking verve – something that was glaringly absent last week – and could see a turning point in his long-term selection policy as Brown, who Jones likes immensely, faces a fight to return. The only change in the pack sees Launchbury in for George Kruis at lock alongside Courtney Lawes, who wins his 60th cap.

Itoje, rested last week and also shortlisted for the world player award, is on the bench.

England will need to be much sharper this week against an Australia team who have won five and drawn one of their last six games, including a rare success against New Zealand.

However, the Wallabies have lost four in a row against England and their only win in the teams’ last seven meetings was in the Rugby World Cup pool game that ended the hosts’ interest in the tournament two years ago.

In an attempt to replicate some of the challenges of playing in the World Cup in Japan in 2019, Jones has changed his team’s routine this week, briefly moving their base to Syon Park in West London and switching their heaviest training day from Tuesday to Wednesday.

“We will have to be effective in everything we do this weekend to win,” he said on Thursday. “This is going to be a great challenge, as we know Australia have been in great form towards the end of their season.”