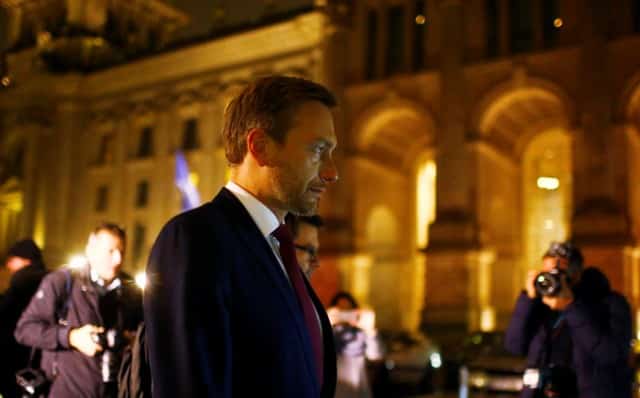 The conservatives, the pro-business Free Democrats (FDP) and the Greens remained divided on climate policy and immigration, but agreed to continue past their self-imposed deadline into the weekend.

“I go into these negotiations with the intention, despite all the difficulties, of carrying out the task voters gave us of forming a coalition,” Merkel said as she arrived for the next round. “It will be tough, but it’s worth going into round two.”

Volker Kauder, the parliamentary floor leader of her Christian Democrats (CDU), said they were prepared to compromise further on reducing emissions from coal-fired power stations to assuage Green concerns.

“I feel readiness by all sides and everyone has to make concessions,” he told reporters as officials scheduled further talks to run to Sunday afternoon.

“I believe that the exploratory talks must end this weekend.”

Failure to agree could lead to new elections, something the mainstream parties fear could lead to the far-right Alternative for Germany (AfD) making further gains after surging into parliament in September.

A new election could also weigh heavily on the euro.

Merkel could still approach her previous coalition partner, the Social Democrats (SPD), but they have said they want to stay in opposition after suffering their worst election result since 1933 in the Sept 24 poll.

A third option, a government without a parliamentary majority, would be unprecedented inGermany‘s post-war history.

Merkel has been forced to explore the tricky option of a three-way “Jamaica coalition” – so-called because the parties’ colours match the island nation’s flag – after her camp lost votes to the far right.

The smaller parties are under pressure from their rank-and-file supporters not to give ground as they haggle over concessions needed for a government programme.

To the right, Merkel’s Bavarian allies in the Christian Social Union (CSU) want a coalition accord limiting immigration to shore up support in their home state, where the AfD threatens to unseat them after 60 years in power in a regional election next year.

That is anathema to the left-leaning Greens, who want to preserve the right of successful asylum seekers to bring their families to join them in Germany – a position backed by two thirds of voters, according to a poll for ZDF television.

The Greens fear giving way on their demand to close down 10 gigawatts of polluting coal-fired power stations would alienate their voters. They rejected Merkel’s previous compromise offer of seven gigawatts.

The FDP has only just returned to parliament after four years in the wilderness.

Its deputy leader, Wolfgang Kubicki, sounded the most pessimistic after the talks, telling ARD TV the parties were “still so far apart on key issues such as migration, fighting climate change, finances and domestic security, that I can’t imagine how we can get together in the short time available”.

The FDP wants tax cuts to please its small and medium-sized business supporters – a tall order, given competing fiscal demands.

A booming economy could come to parties’ aid. A report by the German Chambers of Commerce and Industry on Friday found that rising tax revenues meant the government would have €76bn spare to spend over four years – twice an earlier finance ministry estimate.