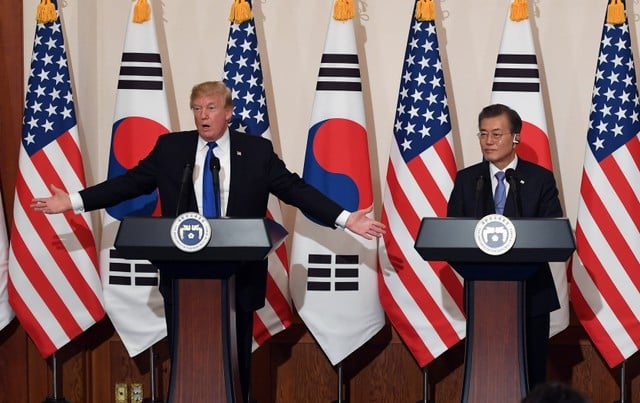 North Korea on Friday ruled out negotiations with Washington as long as joint US-South Korea military exercises continue, and said that Pyongyang’s atomic weapons programme would remain as a deterrent against a US nuclear threat.

In an interview with Reuters, Han Tae Song, North Korea‘s ambassador to the United Nations in Geneva, brushed off the new sanctions which the Trump administration has said it is preparing, as well as the possibility of North Korea being added to a US list of states sponsoring terrorism.

South Korea and the United States agreed on Friday to keep working for a peaceful end to the North Korean nuclear crisis, but a US envoy said it was difficult to gauge the reclusive North’s intentions as there has been “no signal”.

Han, asked about those bilateral talks in Seoul, replied: “As long as there is continuous hostile policy against my country by the US and as long as there are continued war games at our doorstep, then there will not be negotiations.”

He, who is ambassador to the UN’s Conference on Disarmament, was speaking at the Democratic People’s Republic of Korea (DPRK) mission in Geneva, where the DPRK and the United States secured a 1994 nuclear deal which later fell apart.

He said he had no information on when North Korea might test a ballistic missile again, after the last one two months ago.

“The DPRK, my country, will continue to build-up its self-defense capability, the pivot of which is nuclear forces and capability for a triumphant…strike as long as US and hostile forces keep up nuclear threat and blackmail,” Han said.

“Our country plans ultimate completion of the nuclear force,” he said.

China said on Thursday that a “dual suspension” proposal to handle North Korea was still the best option, after US President Donald Trump said he and Chinese President Xi Jinping had rejected a “freeze for freeze” agreement.

Han, asked about China’s latest appeal for a freeze, said “the situation is far from those things”.

Han said that US administrations had “never accepted” halting joint military exercises, adding: “So if they accept such things, then we will think what we do in the future.”

North Korea could not consider abandoning its nuclear programme, he said, adding: “This is the deterrent, the nuclear deterrent to cope with the nuclear threat from America.”

Han said that Trump was expected to announce further sanctions against North Korea. Existing sanctions have constituted “large-scale human rights violations” that had delayed delivery of aid and consumer goods, he said.

“It is obvious that the aim of the sanctions is to overthrow the system of my country by isolating and stifling it and to intentionaly bring about humanitarian disaster instead of preventing weapons development as claimed by the US and its followers,” he said.

Han, asked whether new US sanctions were expected against North Korean individuals or financial structures, said:

“The media is saying the Americans and Trump are considering such things.

“But that is their business and then we don’t mind what they want to do against my country since the aim is quite clear.

“So we are ready for such kinds of measures taken by America against my country,” he said.