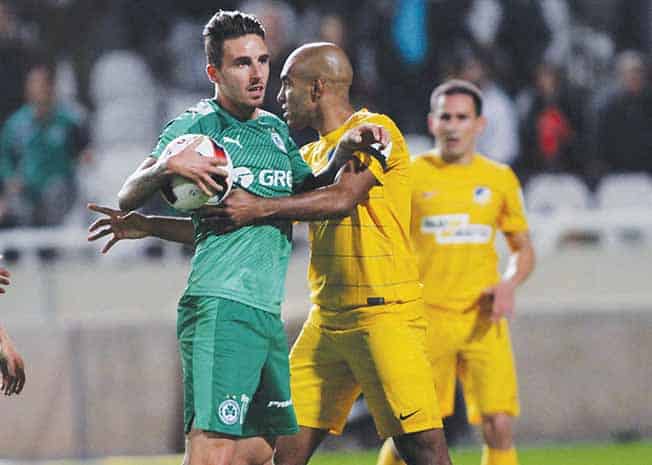 Cyprus champions Apoel have a superb record against Omonia in recent years, remaining unbeaten since April 2013

The big Nicosia derby between bitter rivals Omonia and Apoel kicks off Round 12 of the Cyprus football championship this evening (7pm) following the two -week international break.

Omonia and Apoel have failed to impress so far this season and both are desperate for the three points, especially as they trail leaders Anorthosis and AEK by seven and nine points respectively.

Both coaches, Pambos Christodoulou of Omonia and Giorgos Donis of Apoel, have inferred in recent weeks that they are willing to step down if their employers believe that it would be in the best interests of their clubs, but they were given a vote of confidence by their respective boards.

There is more pressure on Christodoulou, who has seen his team fail to beat any of the three sides promoted from division two this season and, unlike his counterpart at Apoel, he does not have the ‘excuse’ of fatigue and injuries due to big European group matches, where Apoel have admittedly performed beyond expectations.

Christodoulou is facing a huge dilemma in goal as his first choice keeper Constantinos Panayi is almost certainly out through injury.

He will have to choose between the experienced but error-prone Dutchman Petrus Velhuizen or the inexperienced rookie Andreas Christodoulou.
Omonia will also be without the suspended Fabricio while midfielder Kanu limped off during Wednesday’s training session and is unlikely to feature, while Fanos Katelaris and Borja Ekiza both face late fitness tests.

On the plus side, Omonia captain Demetris Christophi came through both of Cyprus’ recent international friendlies unscathed and is expected to be restored to the starting line-up for the first time in a month.

Apoel have a superb record against Omonia in recent years, remaining unbeaten since April 2013, and the champions will be seeking to extend the streak.

Apoel’s biggest problem so far this season was their long injury list, but in recent weeks this has dwindled down from double digits to just three, with two of them – Boy Waterman and Zhivko Milanov – not expected to feature again this season.

Donis, who is also undefeated against Omonia in five games, will have to decide whether to keep the attacking formation he deployed against Pafos FC which did so well, or revert to the more defensive and solid formation he has used in the past.

The system he will opt for will also dictate the players that will start the game, with the fit again Embezilio, Efraim, Oar and Bertoglio competing with Sallai, Aloneftis, Vinicius and Zaheed for four places in midfield and on the wings, with Nuno Morais the only certain starter.

One other certainty is that Apoel’s leading scorer Mickael Pote will lead the attack against the team that first brought him to Cyprus a few years back, and it will be interesting to see what kind of reception the Benin international will receive from the Omonia fans who once idolised him.

Japan health ministry to water down proposal on restaurant smoking