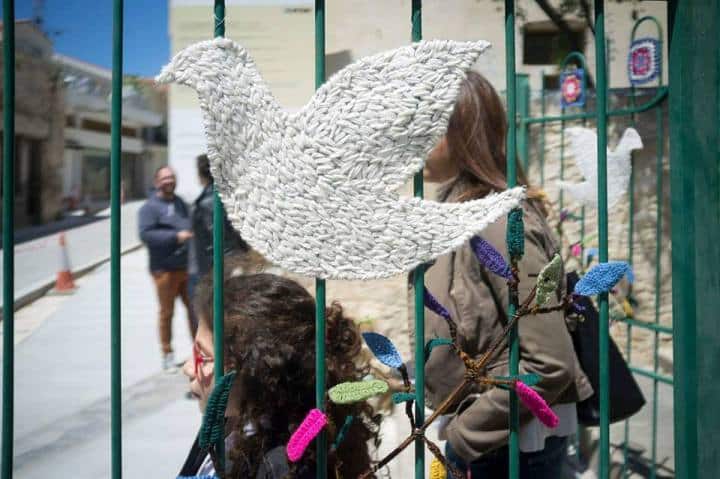 CRAFTERS of all nationalities from all over Cyprus are taking part in the third of the Peace2Peace open-air installation projects under the umbrella of Pafos 2017, the town’s cultural capital title.

The wall at the entrance of the recently renovated Ibrahim’s Khan in the centre of the old town will be decorated with dream catchers made by women working together for the last 15 months.

Before their cultural capital collaboration, their first project in August 2016, saw them decorate an anchor at Paphos harbour, followed by a landmark tree outside the municipal gallery in Paphos, and then a bench at Buyuk Han in the north to promote peace and friendship.

Dream catchers were chosen to symbolise catching the dreams of peace and friendship, said Mouzouri.

“The dream catchers are being made by women from all over Cyprus and all nationalities including Greek and Turkish Cypriot, British, Romanians, Polish, Greeks and others. We are attaching them to hoops now ahead of the installation,” she said.

To mark the occasion of their launch, a ‘Peace2Peace Women Crafts Bazaar’ will also be held at Ibrahim’s Khan on Saturday, December 2, from 11am to 3pm, and will feature all sorts of women crafters and artisans, international and traditional food, demonstrations and traditional crafts, such as weaving on a loom and Lefkara lace, she said.

“All sorts of women are coming together for this event, there will be homemade breads and sweets by Agne Vassiliou, who owns a traditional bakery in Ayia Marina and around fifty different stalls and crafts will take part,” she said.

“This is an important event as women are coming together for a shared experience, no matter what the nationality,” she said.

Mouzouri said that Peace2Peace sees women share ideas and interact with each other, give each other tutorials and show how to make things.

“Talking has brought us together and people from all over the world that live here, feel that they belong to a place, and that is Cyprus,” she said.

Mouzouri said that the women believe they belong to one community and not different ones, separated by race, religion or culture.

She said that the women will continue working together on projects in the coming months, long after the culture capital title has finished.

Tourist arrivals up 14% in October to new record, Cystat says

Saudi ‘swapping assets for freedom’ of some held in graft purge