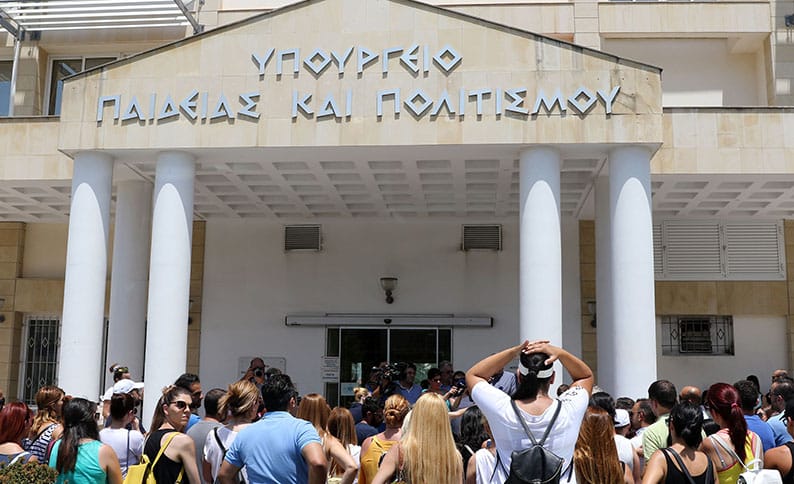 File photo: A teachers protest outside the education ministry in June

THERE is no issue of invalidity regarding the examinations for the appointment of teachers to state schools organised by the Education ministry, the Legal and Audit services declared on Friday.

Public outcry and questions over the validity of the exams were voiced by opposition parties, teacher unions and exam-takers after the topics of one of the exams were posted on the ministry’s website prior to the start of the exam on November 6, leading to the cancellation and rescheduling of the five examinations that day.

Despite initial speculation of deliberate sabotage by forces opposed to the new appointment system, in its first year of a 10-year phase-in to replace the old system in which university graduates were appointed indiscriminately based on graduation year, a ministry probe attributed the blunder to “human error”.

Two of the resits, on physics and religious studies, took place on Friday, with three more exams scheduled for Saturday for chemistry, physical education and computer science. Some 4,500 candidates are contesting 90 job positions, with as many expected to be appointed by the old system of seniority on a waiting list.

Critics demanded that attorney-general Costas Clerides look into the exam system to establish its validity, impartialness and robustness, amid claims of selective leaks to candidates and rumours that a private college, the director of which was linked to the head of the ministry’s Examinations Service, employed senior ministry officials in programmes designed to prepare candidates for the exams.

Following a probe by the Audit Service, which was delivered to Clerides on Friday, minister Costas Kadis said the findings by both independent officials – Clerides and auditor-general Odysseas Michaelides – “respond to the mud-slinging, lies and baseless, unfounded allegations of the last few days”.

In a statement on Friday, the Audit Service said that after investigating the processes followed in organising the exams, as well as any employment relationships between state-school teachers or University of Cyprus staff and the private education centre offering the preparatory courses, it found that “some” of the teachers had been granted permission to give lectures.

“We believe that the public is presented with a negative image when 10 out of 12 guest lecturers in such a private post-graduate programme are teachers of the broader public sector,” Michaelides said.

“We expect this issue to be taken up and addressed by the Education Ministry.”

In its own statement, the ministry apologised again for the “inconvenience caused to the candidates from the cancellation of the November 6 examination” and welcomed the “spirit of co-operation and understanding shown by those taking the rescheduled examinations [on Friday] and Saturday”.

“According to the views of the Legal Service and the preliminary findings of the investigation by the Audit Service […] the incident of early publication of the examination topics clearly appears not to raise any issue of the examinations’ validity or credibility,” the ministry’s statement said.

“However, disciplinary offences are identified, for which a disciplinary investigation has already begun by an independent investigator appointed by the cabinet.”

“The Education ministry thanks the Legal and Audit Services for their prompt investigation of the issue, and particularly for their constructive recommendations,” the ministry said.

“These reports respond to the mud-slinging, lies and baseless and unfounded allegations of the last few days, through which the debasement of services, procedures and the new appointments system itself was attempted.”

Kadis said the examinations, even with the serious problem that arose, will be completed “and that in September we will have new teachers chosen by the new selection system, based on their knowledge, skills, qualifications and experience”.