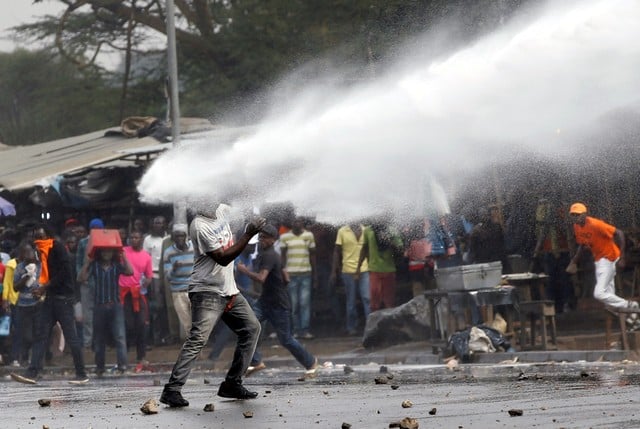 A supporter of Kenyan opposition leader Raila Odinga is sprayed with water by police in Nairobi, Kenya

Police fired tear gas at the convoy and used water cannon as they tried to stop it reaching the capital’s main business district. Some protesters threw stones at police. TV footage showed two vehicles on fire.

The deaths occurred as police and protesters fought on one of the main roads leading to the business district, the photographer, who was at the scene, said.

Mwenda Njoka, the interior ministry spokesman, said he could not confirm the casualties, accusing the opposition supporters of blocking roads, burning vehicles and looting businesses along the route.

“When the people are so unruly, you expect police to react to use reasonable force to get them out of the way,” he told Reuters.

Police retreated several times along the route after the protesters were unmoved by the teargas and water cannon spray. They finally held their ground near the city’s main park, where Odinga, just returned from the United States, intended to address a rally that had been banned.

He blamed President Uhuru Kenyatta for the violence.

“My anger is with that guy called Uhuru Kenyatta. I went abroad… After you welcomed me well, he sent policemen to teargas you, to beat my people, to fire bullets at them. Isn’t this barbaric?,” he told his supporters after driving to safety.

Odinga has called for a “National Resistance Movement” to protest against the outcome of a repeat presidential election last month which saw Kenyatta win a second, five-year term with 98 per cent of the vote after Odinga boycotted the contest. Only 39 per cent of registered voters took part.

The repeat poll was ordered by the Supreme Court after it annulled the results of the August election, won by Kenyatta, over procedural irregularities.

The court will rule on Monday on cases that seek to nullify the rerun election.

The political crisis has stirred fears for the stability of Kenya, a regional hub for trade, diplomacy and security.

Earlier on Friday, demonstrators threw up burning barricades on Mombasa Road, the highway that links Nairobi’s downtown business district and the airport.

Despite a partial police ban on protests in the capital, hundreds of people had gathered in the morning near Jomo Kenyatta International Airport to await Odinga’s return. Police fired into the air to disperse them.

Once Odinga landed, motorcycle taxi drivers and people on foot shouted their support as the motorcade, which included lawmakers from Odinga’s opposition coalition, began moving toward central Nairobi.

Kenya Airways said it had been “impacted” by the disruptions around the airport and offered to book travellers who missed their flights on subsequent ones.

Ahead of Monday’s Supreme Court ruling, Kenya Airways’ chairman told an investor briefing on Friday: “Hopefully we don’t have another presidential election so we can get on with life.”

No need for probe into ‘Sisi gift’, say police and minister