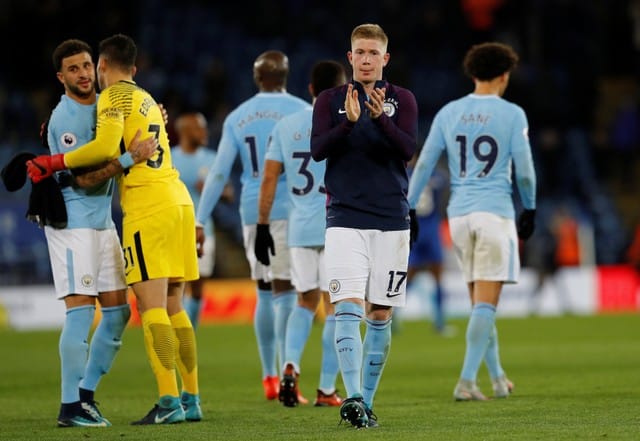 Manchester City enjoyed another satisfying afternoon in the Premier League, brushing off Leicester City 2-0 for their 16th consecutive win in all competitions and seeing one of their closest pursuers Tottenham Hotspur lose ground.

Mauricio Pochettino’s side went down 2-0 at Arsenal whose performance rebuffed the notion that the balance of power has permanently shifted in north London.

Gabriel Jesus and a stunning strike from Kevin De Bruyne provided the goals for City against a Leicester team who have often troubled them in the past.

The home side went close to equalising when Harry McGuire hit the post after the break, but City went straight up the other end and put the result beyond doubt with a stunning counter-attack that De Bruyne rounded off with an unstoppable 20-yard shot in the 49th minute.

The only concern for Pep Guardiola was an injury to John Stones, who hobbled off before the break. The successful return of Vincent Kompany from injury will provide compensation although the Belgian was fortunate to escape with a booking for a foul on Jamie Vardy in the third minute.

At Arsenal, Tottenham manager Mauricio Pochettino said he was “disappointed in the performance and the way we conceded the goals” after the derby defeat although the Argentine was unhappy with Shkodran Mustafi’s opener.

“The goal was offside. But we lose,” he said. “I’m not blaming the referee. It’s a strange situation. It changed the dynamic of the game. We need to accept that. We can’t control that.”

At Anfield Mohamed Salah scored twice as Liverpool beat Southampton 3-0 to record three consecutive Premier League wins for the first time in 2017. The Egyptian’s brace on 31 and 41 minutes made him the league’s top scorer and Philippe Coutinho rounding off the afternoon with Liverpool’s third to put them one point off the Champions League places.

Chelsea had an equally untroubled afternoon with Eden Hazard scoring twice, and Alvaro Morata and Marcos Alonso also finding the net to pile more pressure on Albion manager Tony Pulis, whose side are without a win in 11 games.

“The defending was very poor,” said Pulis, whose team next face a trip to Tottenham.

Palace were pegged back after twice taking the lead though James McCarthur and Wilfried Zaha although Christian Benteke should have sealed it with an easy chance for Roy Hodgson’s side in the second half.

“We had to dig deep,” said the striker, whose goals were the first since he fought back from serious injury.

Burnley continued their impressive start to the season with a 2-0 win over Swansea City. Jack Cork and Ashley Barnes scored the goals to leave seventh-placed Burnley level on points with Liverpool and Arsenal.