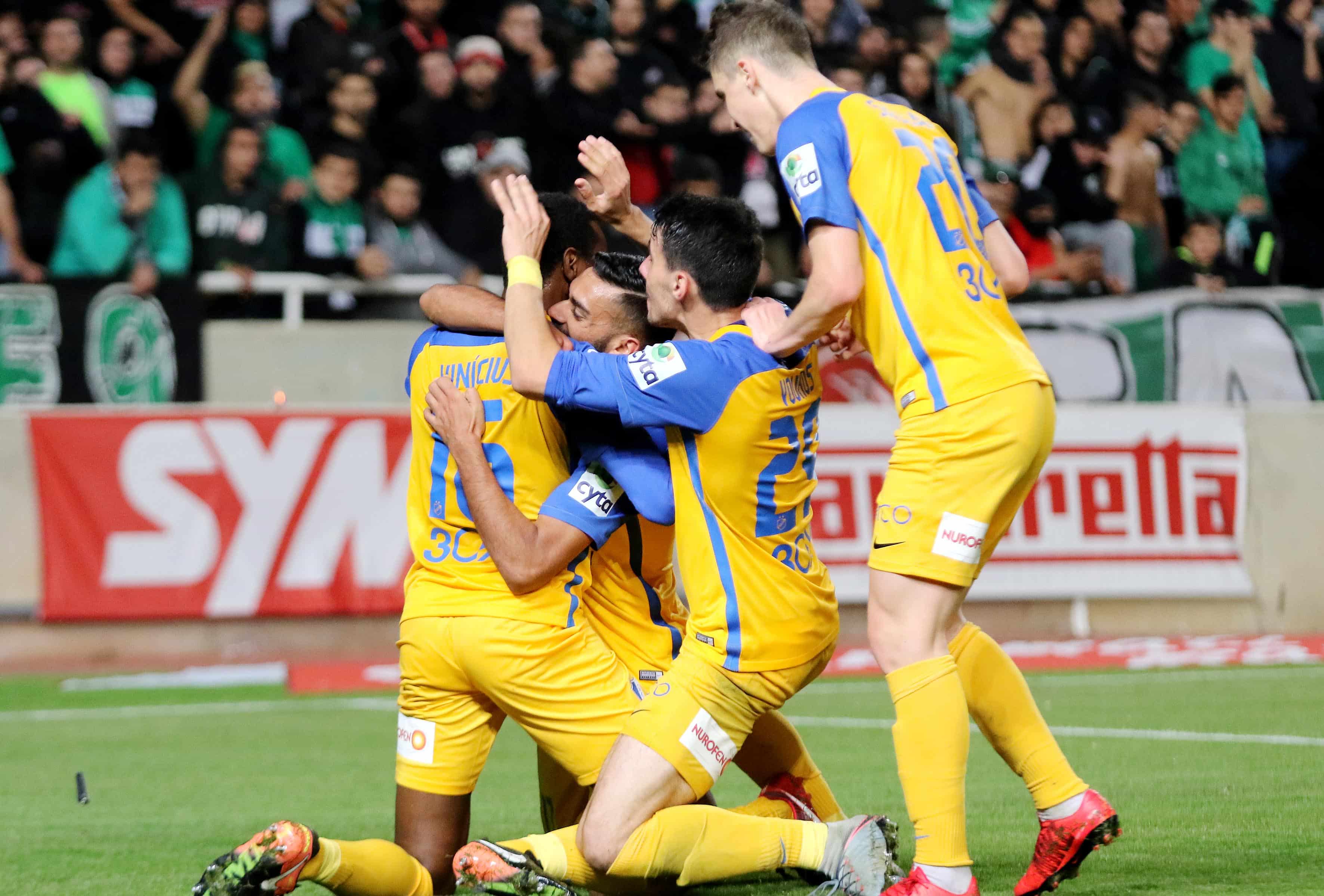 Apoel beat arch-rivals Omonia 3-1 in the opening game of Round 12 of the Cyprus football championship on Friday night.

In a barren and fairly balanced first half, Apoel opened the scoring against the run of play in the 66th minute through Ghayas Zahid, and the same player doubled his tally when he fired past Omonia goalkeeper Christodoulou from inside the penalty area ten minutes later.

An own goal by Apoel’s Greek defender Praxitelis Vouros in the 80th minute gave Omonia hope of salvaging something from the game, but Giorgos Efraim made sure of the three points for the reigning champions when he went past two Omonia defenders and drilled the ball past the hapless Christodoulou for Apoel’s third.

This weekend, the two teams leading the race for the championship, AEK and Anorthosis, face tricky away ties to Ethnikos Achnas and Ermis Aradippou, respectively, while third placed AEL are at home to Nea Salamina in a game they will be hot favourites to win.

Both AEK and Ethnikos are desperate for the three points for totally different reasons.

Ethnikos have started the season poorly and they have already changed their coach three times this season with their latest appointee, the Georgian Giorgi Tsichrandze, making his debut on the bench against AEK.

Tsichrandze will need to get the best out of his players if they are to get anything out of this game, especially as AEK seem to have hit a rich vein of form of late, notching four wins and a draw in their last five games.

The Georgian is likely to have Davor Rokas and Nikolai Kipiani available again after injury.

AEK’s coach Imanol Idiakez will not take this game lightly and will field his strongest possible team against a side that a few weeks ago held last season’s champions, Apoel, to a deserved draw.

Another coach will be making his debut this weekend, namely Serbian Goran Milojevic, who has taken over the hot seat at Ermis Aradippou, who, like Ethnikos, have their third coach with just a third of the season gone.

Milojevic would have hoped for an easier debut as they face leaders Anorthosis who have yet to suffer defeat this season. The Serb is expected to make a number of changes to his starting eleven but he cannot call upon the suspended Imerekof and Pachenko.

Goal shy Anorthosis will almost certainly be without Cisse, Bandalofski and Carlitos through injury, but their coach Rony Levi will be hoping his striker Camara will continue from where he left off last time when he grabbed a hattrick against Olympiakos.

Apollon, one of the pre-season favourites for the title, though unbeaten in the league, are still searching for their first away win of the season having drawn their four away games.

There are no injury concerns for Apollon but coach Sofronis Avgousti may make his plans with the crucial Europa League game against Lyon in the back of his mind.

Alki who started the season in impressive fashion have faltered considerably in recent weeks having lost their last four games and slipping to 11th place.

Without 5 key players due to injury (Pieraci & Avraam) and suspension (Diakite, Enkomo, Frangescou) it will be a major upset if they can get anything out of this game.

Third placed AEL should have no problems in securing their fourth consecutive win against last but one Nea Salamina and keeping the pressure on the top two.

In the final weekend game Olympiakos are at home to Aris while the final game of the round will take place on Monday between Pafos FC and Doxa Katokopias.