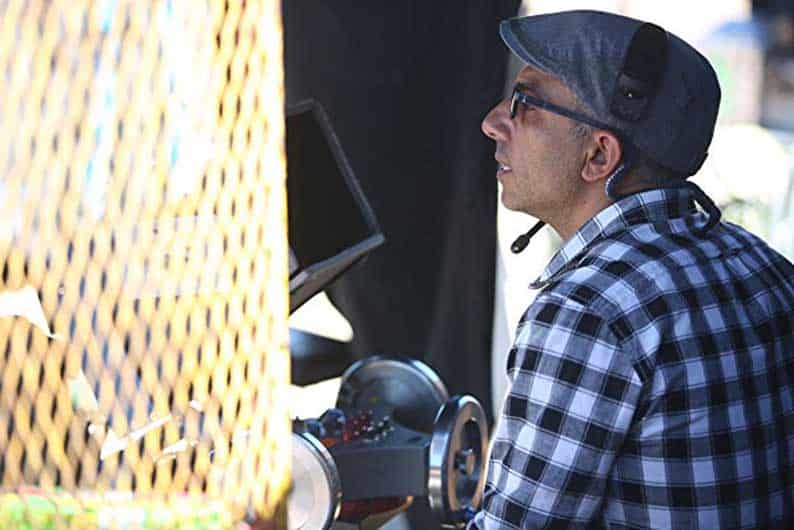 Can you name the born and bred Cypriot who is on first name terms with these Hollywood royals – Ken, Cate and Meryl? If you’re struggling, here are their surnames, respectively – Branagh, Blanchett and Streep.

Still no closer to the answer? Here it is – Haris Zambarloukos. You’ll have seen that name on the credits of many celebrated movies, but it will pass most viewers by unless they’re Cypriots, who will exclaim with pride, “He must be Cypriot.”

Even so, few of his compatriots will know he is a celebrated and versatile cinematographer who is held in high regard in Hollywood circles.

Haris, 47, was behind the look of the latest re-make of Murder on the Orient Express, which was released this month and showing in cinemas in Cyprus now. It is directed by Branagh who also stars as Agatha Christie’s legendary detective, Hercule Poirot. Others in the glittering cast include Johnny Depp, Penelope Cruz, Willem Dafoe, Derek Jacobi and Michelle Pfeiffer – although most were upstaged by Branagh’s moustache, which has the wingspan of an albatross.

You might not immediately recognise his name, but you will almost certainly recognise his face. Miltos, a highly regarded veteran of stage, television and the big screen, had a major role in the first series of Game of Thrones, playing Syrio Forel, a charismatic master swordsman who teaches Arya Stark how to wield a sword with lethal effect. It helped that Miltos, who has appeared in Royal Shakespeare Company productions, is an accomplished and enthusiastic fencer. Four years later in 2015, he was in Star Wars: The Force Awakens and, in the same year, The Danish Girl.

Haris and Miltos met briefly during the shooting of Murder on the Orient Express, but did not have time to discuss their common connection to Cyprus.

“We all enjoyed the scene (where Miltos plays a baker). He is a great actor,” Haris told the Sunday Mail. “But our schedules are crazy.”

Miltos agreed. “There are hundreds of people and so much to do. With a big project like that, it’s always exciting. I felt like a six-year-old, I think we all did,” he told the Sunday Mail. He spent just a few days for his scenes on the set, which he said was like a Turkish bazaar, complete with live goats, a train station and scores of people moving around.

What Miltos admired most was Branagh’s ability to play the main lead and direct at the same time. “I remember playing the scene where he kisses me telling me I am this genius baker and I remarked on the big moustache. He said ‘it’s like acting with another actor in my face’.”

Haris also enjoyed working with the actors. “They are all professionals, and we supported each other as best we could.” He particularly liked how the team brought out an emotional angle often neglected in adaptations of Agatha Christie novels, whose stories are often treated as whodunit.

“We managed to bring out what crime really is and how horrible the loss, the outcome of revenge is, something that is usually ignored.”

Haris, an English School old boy, developed a love of photography when he got his first camera at the age of eleven, and spent much time during his teens in the darkroom. After finishing the army in 1989, he went to study at St Martin’s School of Art in London.

“When I tried out different things like film and video during the foundation phase I was hooked,” he said.

After obtaining a BA in Fine Arts from St Martins, he got a masters in cinematography from the American Film Institute in 1997. He worked as a camera intern under Conrad Hall in A Civil Action (1998) and his first feature film as a cinematographer was Camera Obscura two years later.

In 2006, he was named one of Variety’s ‘10 Cinematographers to Watch’. His first collaboration with Branagh as director came the following year with Sleuth, starring Michael Caine.

In 2008, Haris hit the big time as the cinematographer on Mamma Mia! when movie-goers worldwide wallowed in Abba nostalgia and marvelled at what a great singer Meryl Streep is (and what a bad one Pierce Brosnan is).

Haris’ work on Mamma Mia! also did wonders for the tourism trade for Skopelos, the sunlit Greek island where most of the movie was shot.

Haris’ job takes him all over the world where he joins production teams working on movies. As a cinematographer, he is in charge of the camera and light crews working on a film, television production or other live action piece and is responsible for making artistic and technical decisions related to the image. “A great deal of work goes into a film. My job is to research beforehand, scouting locations, going to rehearsals and working closely with production designers.”

Miltos is no less busy and, like Haris, is very modest: neither is a name-dropper despite knowing many of the best-known people in Hollywood. Miltos has yet to see Murder on the Orient Express, which came out earlier this month, because he is working in an exciting new play, Young Marx, a portrayal of the revolutionary as a young man in 1850s London. It’s on at the Bridge Theatre, the first brand new theatre built in London in the past 80 years.

Haris and Miltos share a love of Cyprus. “I go as much as possible (to Cyprus but), it is not easy to juggle my work with my family,” Haris said. “I was born and raised there so my roots are there. This is not nostalgia, they are my family and friends.”

Miltos’s parents lived in Ayios Theodoros, Larnaca, before they moved to the UK.

“Having a fish and chip shop, they were busy, but my sister and I would be put on a plane to Cyprus in our summer or Easter holidays and stay with our aunt,” he said. “We always had a connection to Cyprus, even more so when our parents moved back to the village after 25 years in the UK.”

Miltos said he now travels to Cyprus to be with his relatives at least once a year.

Given how often the Miltos and Haris visit Cyprus, their paths are likely to cross sometime on the island. And what movie fan wouldn’t love to listen in to their tales of Hollywood?