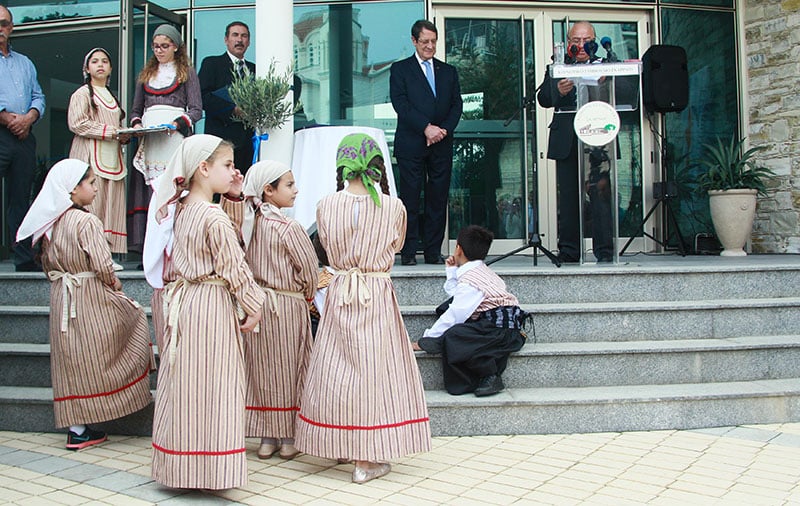 Despite President Nicos Anastasiades’ insistence that he is simply working through his five-year term as normal, the evidence seems to suggest he is in full campaign mode and wooing as many special-interest groups as possible.

Anastasiades and his cabinet have come under heavy fire from opposition parties and sectors of the public for what has been perceived as electioneering, following an unusual pace of announcements of government handouts to various groups, not least of which was the recent creation of a “solidarity fund” to help victims of the 2013 bail-in, to which it has already pledged €25 million from next year’s budget.

Other recent announcements include the cabinet decision to write off around €20 million of football clubs’ dues to the state – in income tax or VAT – and another €20 million in increased Christmas bonuses to “vulnerable groups”.

Earlier, Anastasiades had toured the island’s districts from July to October, pledging infrastructure projects worth well over €0.5 billion in total over the next few years, undertook repayment of €185 million in local-government loans guaranteed by the state, and announced an unprecedented scheme to support newspapers with annual cash injections of up to €67,000 for three years.

Although some of these were actually thought to be good, if deliberately timed, ideas, none came without a corollary argument that raised questions.

The issue of the solidarity fund, for example, had come up several times in the past, and every time the government had summarily and in no uncertain terms dismissed any talk of compensating the victims of bank restructuring.

“There are no thoughts on compensating either haircut depositors or bank bondholders with taxpayer money,” Finance Minister Harris Georgiades said in 2015.

“If there are such thoughts, then they are considered between the bank and their customers, and they can be settled only in court.”

Such categorical denials suddenly turned into a “solidarity and social cohesion fund”, to which the state has already pledged tens of millions, with more to come.

Earlier this month, public outcry forced the government to walk back a pledge to “write off” football clubs’ dues to the taxman, clarifying that it was simply enforcing a 2007 deal they had come to with the government. A deal as old as that could have been triggered at any point since, but the obvious question as to why it was returned to this late into the administration went unanswered.

On the same day as the football clubs’ perk was decided, the labour minister also announced €20 million in Christmas bonuses for guaranteed-minimum income recipients, low-pension earners and the enclaved, and the return of an “honourary” handout to mothers with four or more children, which had been abolished in 2012.

In the face of criticism revolving around arguments of exploiting the needy for “political expediency” – code for Anastasiades’ campaign for re-election – the minister said these were the same bonuses paid out in previous years. Most were, but at about 80 per cent of the payments to be received this year.

The municipalities’ loans decision was also met with mixed reception. While most acknowledged that in order for struggling municipalities to get their house in order debt write-offs would be essential it was unthinkable that these would come with no strings attached particularly when local-government reform bills aimed at cutting cost and improving efficiency have been sitting in parliament since 2015.

But even as these decisions left most with a knowing smile on their faces and were shrugged off as just another administration working for re-election the way so many others before it did, the government appears confident in its argument that the improvement in public finances finally allows some room for social welfare and reform projects.

Other evidence points to a dramatic shift in focus. In the last month alone, President Nicos Anastasiades has hosted nine special-interest groups at the Presidential Palace, from high-profile meetings that sought to resolve long-standing and particularly thorny disputes, such as the one with trade unions of the state-owned power company EAC who are struggling to avoid privatisation, to the movement of refugee mothers, the association of hunters, a working group for the construction of an astronomical observatory in Troodos and the pharmaceutical association.

These meetings came in addition to countless appearances, speeches and meet-and-greets at clubs, openings, award ceremonies, events and even laying the foundation stone at what is envisioned to become “Nicosia’s tallest building”.

In the same period last year, the president had three such meetings – if one counts a meeting with Archbishop Chrysostomos – and the previous year just one – with the Animal Party.

In a recent interview, Anastasiades dismissed the electioneering charge, arguing that presidents are “elected for five years, not four”.

“I can’t be expected to, and will not, stop being president in the run-up to the election,” he said.

But presidential time is scarce and extremely valuable, which is precisely why such issues of interest to small subsets of the population are routinely dealt with at lower levels of the hierarchy.

It is also why some of the groups that were invited to the palace had been ignored when they had requested such an audience in the past.

“Naturally, just before an election you’re more likely to be heard,” the head of a delegation that was seen by Anastasiades this month told the Sunday Mail.

“We had asked for a meeting before but got no response.”

Although few of these groups got any firm commitments in response to their demands, most were happy just to have got their foot in the door.

“We knew we weren’t getting immediate solutions,” a delegation member said.

“Even if nothing goes further than a pledge, we can cite that pledge in the future alongside the president’s name.”

Perhaps most worryingly, everyone involved seems resigned to the practice of issues being ignored for years and taken up “at the right time”.

“I’m no fan of Anastasiades, but I’m not blaming anyone,” the delegation head said.

“This is how the game is played.”

Our View: Time for politicians to tackle education’s real problems

Re-run of ‘greatest ever road race’