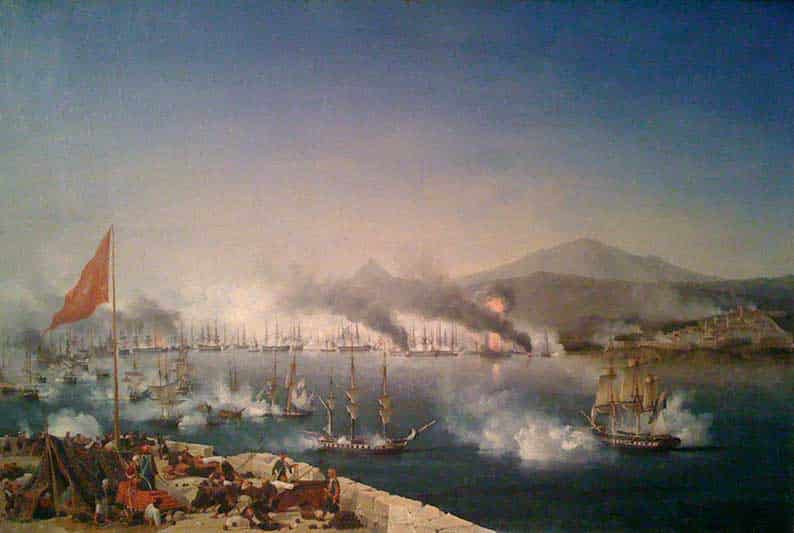 The British, the Russians and the French defeating the Turks at the Battle of Navarino which led to the creation of the Greek state

THE anti-British sentiment prevalent among a very broad section of the Greek Cypriot population is astonishing and raises several questions. Britain is considered the source of all our woes. In a Facebook post, SP, a well-known economist, describes the Englishman as a “killer, colonialist, corrupter, dishonest, filthy and devious”.

Yet most Cypriots are unaware, because of their inadequate education, of the other side of the coin regarding the British. This is why I will attempt to give a more balanced view of Britain’s role in our history.

For a start, no progressive person can praise the “glory and greatness” of the British Empire because the British – like all colonialists – monopolised and exploited the valuable resources of their colonies, paying the natives very low wages. It was always thus: financial interest uber alles. As Ahmed Maulevi, an Indian anti-colonialist of the 19th century, said, “for an industrialist in Lancaster to become rich, half a million people in India must die of starvation.”

But we should look at our own relations with the British. Some might be shocked by the claim that the Greek state might not have existed today had it not been for Britain. The revolution of 1821 failed because by 1827 there was no front of resistance. Thankfully for Hellenism, the great powers (Britain, France and Russia) intervened and defeated the Turks at the Battle of Navarino, and it was this defeat that led to the creation of the Greek state.

The political geography would have been very different today without this naval victory. Turkish borders could have stretched all the way to western Greece and Greeks would have made up a small proportion of Turkey’s population. This is why many historians consider October 20, 1827 – the day of the battle of Navarino – more important than March 25, 1821, the day the Greek revolution against Ottoman rule began. Yet the anniversary of the battle is neither remembered nor celebrated. A case of unacceptable ignorance or ultimate indecency?

Of course, the great powers intervened for their own interests: the liberation of Greece was merely a by-product of the pursuit of those interests. But this does not negate the gratitude Greece should feel towards the three powers, especially Britain which played a leading role. It suffices to mention that the commander of the allied naval force was the Englishman, Rear-Admiral Sir Edward Codrington. In addition, there were many British Philhellenes among prominent citizens (politicians, thinkers, writers, poets, merchants, bankers and former soldiers) who applied pressure on the British government to help Greece gain her freedom. Among the best-known were Lord Byron and George Canning, foreign minister and prime minister.

Let us also take a look at period in which Cyprus was a colony, from 1878 to 1960. We are reluctant to admit that the British did much that was good for Cyprus which they wanted for military reasons and not for economic exploitation, like other colonies, as it was a poor agricultural country. First of all, they established a secular state. Suddenly, the archbishop, who was the representative of the sultan in Cyprus and effectively a minister of finance and of interior, was demoted to being an ordinary citizen with tax obligations.

This was very difficult to swallow – to put it mildly – for the clerics who as a reaction cultivated the desire for enosis. In other words, the birth of the desire for enosis was related to the change in regime. Archbishop of Cyprus, Sofronios, when giving his welcoming address to the first British governor in Nicosia supposedly expressed the Cypriot desire for union with Greece. But this is a claim disputed by several historians. Dr Rolandos Katsaounis, in his articles, explained that despite his efforts he had been unable to find any primary source confirming this claim.

The British also set up a civil service in which recruitment was meritocratic. They organised a justice system with British judges who, in contrast to the Ottomans, were renowned for their impartiality. Illiteracy was significantly reduced by investing in education – the number of schools increased from 83 in 1878 to 322 in 1910. They established a Lands and Surveys Department, helped fight diseases plaguing the country, dried up swamps, created a road network and operated a railroad between Famagusta, Nicosia and Morphou. They built a port in Famagusta and set up postal and telegram services among other services.

In the Conference of 1948, the British offered a constitution, which if we had accepted, would have gradually granted us complete independence. The legislature would have consisted of 26 seats, 18 of which would have gone to Greek Cypriots, four to Turkish Cypriots and four to the top officials of the colonial government. The Turkish Cypriots were regarded a minority and would not have been able to veto bills. Unfortunately, the Greek Cypriots rejected this proposal for the sake of an unattainable goal that in the end caused a catastrophe.

Against all that, of course, is a major grievance the Greek Cypriots have against the British: the hanging of young men and the torture of Eoka fighters in the 1955-59 period. The British response at the time was that the murder of British civilians was much more serious than torture. It is a contentious argument that many governments still make today, but in this case it should not detract from the overall need to reassess the British legacy.

As a conclusion I would like to remind readers of a cliche – half the truth is just another lie.