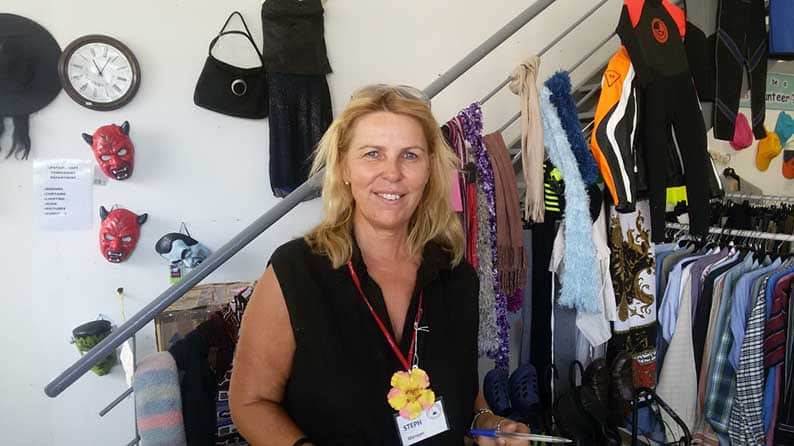 PAWS dog shelter shop in Chlorakas has fast established itself as the number one charity and second-hand furniture shop on the island, through the efforts of one Paphos woman who has galvanised staff and turned fortunes around in a matter of months.

Stephanie Driscoll, 55, is a fully qualified nurse, who retired to Paphos from the UK with husband Michael in 2012. The animal lover – her first memory is rescuing a bee trapped in a spider’s web at the age of four– aims to raise 120 thousand euros a year through sales at the shop, all of which will go towards helping the 150 or so unwanted and stray dogs at Paws dog shelter in Achaelia.

“The shelter team do a superb job and they are all very special people. I want to work hard at the shop to ensure that they never have to worry about paying a vet’s bill, or funding airline flights for those being rehomed abroad,” she told the Sunday Mail.

Founded in January 1985, Paws dog shelter aims to rehome as many shelter dogs as possible and offer them a better quality of life, said Matthew Harris, one of the shelter managers.

“It will cost us around 200 thousand euros to operate the shelter this year and since Stephanie has taken over the shop and it’s working so well, it is allowing us to do things we couldn’t before, such as fixing up dogs with bad physical injuries,” he said.

Funds raised go to feeding the dogs and vets’ bills. Every dog has blood tests on arrival to check they are healthy and are then either spayed or neutered. They are made ready to either travel abroad to be rehomed or stay in the shelter.

Driscoll and her husband live in Chlorakas with a number of rescued animals – three dogs, five cats and two rabbits. The animal lover started helping out at the charity shop in 2014 when it was far smaller.

“I realised that they needed investment and expansion, so we donated some money and a number of local tradespeople worked at the shop to extend it, and now it’s double the size,” she said.

Harris said that Driscoll’s vision for the store, which was previously barely breaking even, and the dedication of volunteers are helping ease the lives of hundreds of Paphos’ dogs.

This year, the shop manager, who is paid by the charity but pours all of her wages back into the shop, along with staff created an art gallery selling pictures and paintings, a bedding and lighting area and a huge furniture outlet on the lower level. The store also sells clothing for adults and children, books, white goods, kitchen equipment and bric a brac.

Driscoll has already hit her 10,000 euros a month target once, and come close to it on a number of other occasions, and said the shop’s success is due to a concerted team effort from volunteers, only selling good quality, clean and quality stock, and the ability to deliver goods swiftly, in many instances, on the same day.

Younger volunteers have also stared working at the shop, which has helped to inject a different dynamic, she said, although volunteers of all ages are still required.

With Christmas approaching, staff have opened a Christmas showroom upstairs and at the end of November, husband Michael will open a Christmas grotto, complete with Father Christmas.

Many of the shelter’s dogs find new homes in Germany, through the work of the facility’s sister charity, Zypern Hunde and this year’s figures could hit 200 rehomings with them, said Harris.

Dogs remain at the shelter for around one to three years on average before they find homes and the shelter does not euthanise any healthy dogs.

“Last year we rehomed 300 of the 370 dogs that came to us, including our longest resident, 16-year-old Betty Boo, who has been with us for 13 years. She went to a new home in Germany,” he said.

Committee to search for remains of missing in former landfill