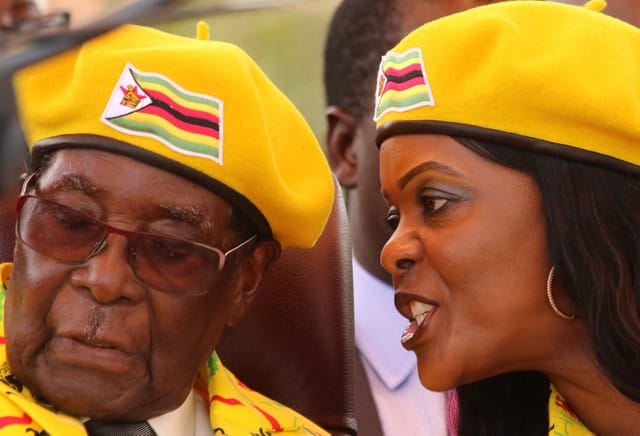 FILE PHOTO: President Robert Mugabe and his wife Grace Mugabe at a rally of his ruling ZANU(PF) party in Harare earlier this month

By MacDonald Dzirutwe and Joe Brock

Zimbabwe’s ruling party fired Robert Mugabe as its leader on Sunday and gave the 93-year-old less than 24 hours to quit as head of state or face impeachment, an attempt to force a peaceful end to his 37 years in power after a de facto coup.

Mugabe, the only leader Zimbabwe has known since independence from Britain in 1980, was replaced by Emmerson Mnangagwa, the deputy he sacked this month, a senior party official told a news conference.

In scenes unthinkable just a week ago, the announcement was met by cheers from the 200 ZANU-PF delegates packed into the party’s Harare headquarters to seal the fate of Mugabe, whose support has crumbled in the four days since the army seized power.

Mugabe’s 52-year-old wife Grace, who had harboured ambitions of succeeding her husband, was also expelled from the party, along with at least three cabinet ministers who had formed the backbone of her ‘G40′ political faction.

Speaking before the meeting, war veterans’ leader Chris Mutsvangwa said Mugabe was running out of time to negotiate his departure and should leave the country while he could.

“He’s trying to bargain for a dignified exit,” he said.

He then followed up with threat to unleash the mob onto Mugabe if refused to go, telling reporters: “We will bring back the crowds and they will do their business.”

Moments after the vote was taken to remove Mugabe, the delegate hall erupted in applause.

“The president is gone. Long live the new president,” Mutsvangwa, who has led an 18-month campaign to remove Mugabe shouted, according to cellphone footage posted online.

Mnangagwa, a former state security chief known as “The Crocodile,” is now in line to head an interim post-Mugabe unity government that will focus on rebuilding ties with the outside world and stabilising an economy in freefall.

On Saturday, hundreds of thousands of people flooded the streets of Harare, singing, dancing and hugging soldiers in an outpouring of elation at Mugabe’s expected overthrow.

His stunning downfall in just four days is likely to send shockwaves across Africa, where a number of entrenched strongmen, from Uganda’s Yoweri Museveni to Democratic Republic of Congo’s Joseph Kabila, are facing mounting pressure to quit.