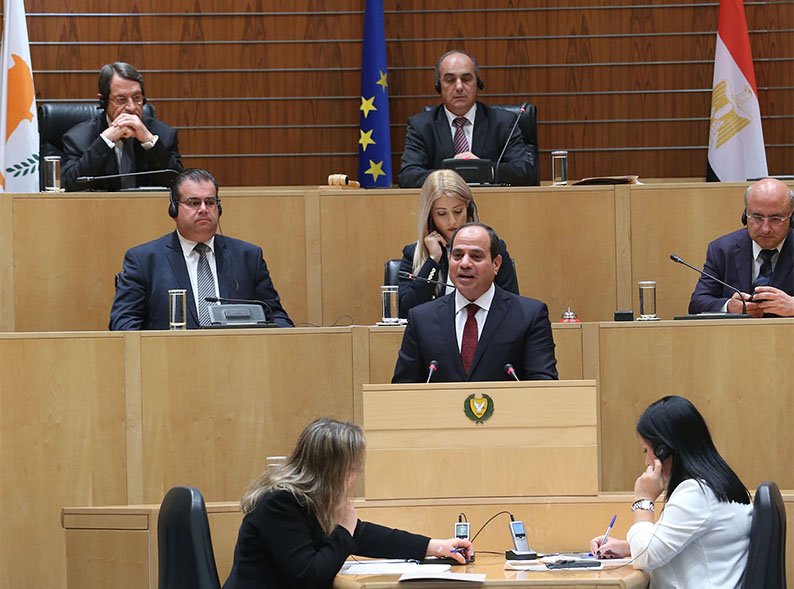 Cyprus and Egypt, two nations with historical ties of friendship, are committed to working together to face regional challenges, particularly terrorism and the migrant crisis, Egyptian President Abdel Fattah al-Sisi said in Nicosia on Monday.

Addressing a special session of the House plenary, also attended by President Nicos Anastasiades, Sisi spoke of a region in turmoil following political developments in Libya and Syria, leading to an upsurge in migratory waves and acts of terrorism.

Terrorism, he said, is a major threat facing the world today, and can only be dealt with through “multi-faceted cooperation”.

Sisi is on the island on an official visit and to attend on Tuesday the fifth trilateral meeting among Cyprus, Greece and Egypt which will also take place in Nicosia, with the participation of Greek Prime Minister Alexis Tsipras.

“I came to Cyprus today fully convinced that we can succeed in dealing with all the challenges we face,” Sisi, speaking in Arabic, said.

He went on to thank Cyprus for supporting Cairo in its efforts to counter terrorism which is aimed at destabilising Egypt.

In his address, Sisi referred to the close relations between the two countries’ former leaders, Gamal Abdel Nasser and Archbishop Makarios.

He expressed Egypt’s gratitude to Makarios for supporting the creation of the Non-Aligned Movement in the 1960s.

Nasser was among the founding fathers of the Non-Aligned Movement, formally established as an organisation in 1956.

Cyprus joined the movement in 1961. It ceased to be a member in 2004 when it joined the European Union.

House speaker Demetris Syllouris welcomed Sisi to Cyprus, calling his presence in the House an “historic day” for the two nations’ governments, parliaments and people.

“Our bilateral relations today are experiencing their most productive and active phase, through consistent mutual support on the international political scene and a deepening cooperation on matters of vital importance to both countries,” he said.

The tripartite partnership between Greece, Cyprus and Egypt has already forged a common strategy to promote cooperation, the ultimate objective of which is the security and prosperity of the peoples and the creation of conditions of stability in the wider region, he said.

Syllouris thanked Egypt for its efforts within the Organisation of Islamic Cooperation geared at averting efforts to upgrade or recognize the breakaway regime in northern Cyprus.

Earlier in the day Sisi and Anastasiades held a one-on-one meeting at the Presidential Palace and later participated in meetings with delegations from both countries, where two Memorandums of Understanding were signed on public health and medicine, and on entrepreneurship, information technology and communications technology. A cooperation agreement was also signed on security issues for the years 2018 and 2019.

On his arrival to the Palace on Monday morning, Sisi laid a wreath at the statue of Makarios.

Anastasiades bestowed Sisi with the Grand Collar of the Order of Makarios III, which is the highest Order of Merit awarded by Cyprus, while Sisi bestowed his Cypriot counterpart the Order of the Nile, Egypt’s highest state honour.

Following the meetings, Anastasiades said that bilateral relations between the two countries are developing at a satisfactory pace in all fields: political, energy, defence, health, environment and culture.

The two countries have also agreed to hold regular meetings at government level, he said, to better monitor the materialisation of all the actions that are being scheduled and for further cooperation.

Anastasiades said that they agreed that the discovery of significant reserves of natural gas in the wider area offer a unique opportunity for further strengthening relations.

The president said that the cooperation of Cyprus and Egypt, is based on the principles of international law and the UN Convention on the Law of the Sea.

“Our vision is that the discovery of hydrocarbons in the region becomes a catalyst for a wider cooperation in the eastern Mediterranean contributing to peace, stability and prosperity in our region.”

Anastasiades reassured Sisi that the Republic of Cyprus continues to support stronger relations between Egypt and the EU.

“We believe that Egypt is a necessary strategic partner of the EU in important fields such as security, the fight against terror, stability in the region, energy and the refugee crisis,” he said.

The discovery of hydrocarbons, he said, would bring multiple benefits to the peoples of the region, and would contribute to Europe’s quest to diversify their energy resources.

He also stressed Egypt’s support to Cyprus’ right to utilise its natural wealth within its exclusive economic zone based on international law and the agreements it had signed also with Egypt.

Later on Monday the two presidents attended a Cyprus-Egypt Business Forum and a dinner hosted by Anastasiades in Sisi’s honour.

Egypt’s Trade Minister Tarek Kabil said during the business forum that his ministry would offer the means and support to Cypriot companies to discover business opportunities in Egypt, while Sisi expressed his hope that the meeting was the beginning of a closer cooperation between the two countries.

According to Kabil, Egyptian exports to Cyprus increased 88 per cent this year in terms of plastic products, fish, spare parts of ships, ceramics and other items.

Meanwhile the value of Cypriot exports to Egypt were valued at €20m in 2017, increasing 147 per cent compared to last year.

During Sisi’s and Tsipras’ visits, on Monday and Tuesday, increased security measures will be in place that also affect traffic. Parts of roads or lanes in Larnaca, the highway between Larnaca and Nicosia and in Nicosia, will be closed for a period of time.

Police urged the public to be patient and follow traffic officers’ instructions.