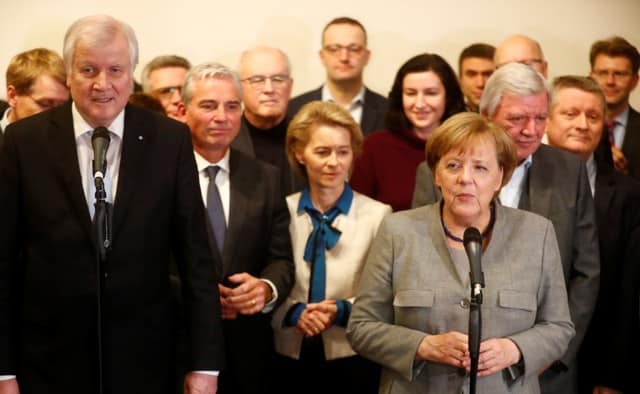 Efforts to form a three-way governing coalition in Germany collapsed on Monday, pitching Europe’s biggest power into political crisis, and its president told parties they owed it to voters and European neighbours to form a government.

The major obstacle to a deal was immigration, according to Chancellor Angela Merkel, who was forced into negotiations after bleeding support in a Sept. 24 election to the far right in a backlash at her 2015 decision to let in over 1 million migrants.

The failure of exploratory coalition talks involving her conservative bloc, the liberal pro-business Free Democrats (FDP) and environmentalist Greens raises the prospect of new elections and casts doubt over her future after 12 years in power.

Negotiations broke down after the FDP withdrew saying they had found insufficient common ground with her Christian Democratic/Christian Social Union bloc and the Greens.

President Walter Steinmeier said Germany was now facing the worst governing crisis in the 68-year history of its post-World War Two democracy. After meeting Merkel, he warned parties not to shirk their democratic duties – remarks seemingly targeted at the FDP and Social Democrats (SPD), who on Monday ruled out renewing their “grand coalition” with the conservatives.

“Inside our country, but also outside, in particular in our European neighbourhood, there would be concern and a lack of understanding if politicians in the biggest and economically strongest country (in Europe) did not live up to their responsibilities,” he said in a statement.

Business leaders also called for a swift return to talks.

With German leadership seen as crucial for a European Union grappling with governance reform and Britain’s impending exit, FDP leader Christian Lindner’s announcement that he was pulling out spooked investors and sent the euro falling in the morning.

Both the euro and European shares later recovered from early selling, while German bond yields steadied near 1-1/2 week lows, as confidence about the outlook for the euro zone economy helped investors brush off worries about the risk of Germany going to the polls again soon.

Steinmeier’s intervention suggests he regards new elections – desired by half of Germany’s voters according to a poll – as a last resort. The Social Democrats have so far stuck to a pledge after heavy losses in the September election not to go back into a Merkel-led broad coalition of centre-left and centre-right.

The main parties fear that another election so soon would let the far-right, anti-immigrant Alternative for Germany (AfD) party add to the 13 percent of votes it secured in September, when it entered parliament for the first time. Polls suggest repeat elections would return a similarly fragmented parliament.

The failure of coalition talks is unprecedented in Germany’s post-war history, and was likened by newsmagazine Der Spiegel to the shock election of U.S. President Donald Trump or Britain’s referendum vote to leave the EU – moments when countries cast aside reputations for stability built up over decades.

The unravelling of the German talks came as a surprise since the main sticking points – immigration as well as climate change policy – were not seen as FDP signature issues.

Green politician Michael Kellner accused Lindner of “bad theatrics”, one of many who suggested the liberal, pro-business party had never been serious about negotiating.

“It is better not to rule than to rule the wrong way,” Lindner said, announcing his withdrawal in the small hours, blaming the breakdown on a lack of progress on education and tax policy – areas that had been seen as less contentious.

Responding to criticism, FDP vice chairman Wolfgang Kubicki said a tie-up would have been short-lived. “Nothing would be worse than to get into a relationship about which we know that it will end in a dirty divorce,” Kubicki said.

The SPD, which came second in the September election, said it had no wish to recreate its alliance with Merkel and that voters should be given a say.

“We are not afraid of repeat elections. In such a situation, the … voters must reassess what is going on,” SPD leader Martin Schulz told a news conference. He added that a minority government was not a practical option in Germany.

Even if the SPD or the FDP revisit their decision, the price for either party to change its mind could be the departure of Merkel, who since 2005 has been a symbol of German stability, leading Europe through the euro zone crisis.

The inability to form a government caused disquiet elsewhere in Europe, not least because of the implications for the euro zone reforms championed by French President Emmanuel Macron.

Germany’s political impasse could also complicate and potentially delay the Brexit negotiations – Britain has just over a year to strike a divorce deal with the EU ahead of an exit planned for March 29, 2019.

“It’s not in our interests that the process freezes up,” Macron told reporters in Paris, adding that he had spoken with Merkel shortly after the failure of talks.

A Kremlin spokesman said Russia was following events closely. “We wish for the swiftest and most successful end to this process,” said Dmitry Peskov.