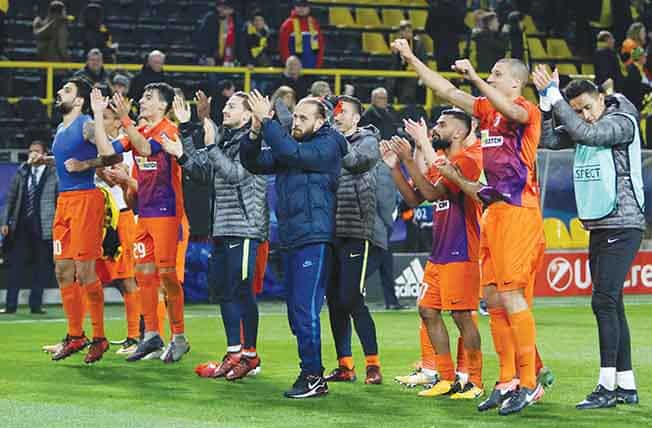 A spirited display away to Borussia Dortmund last time out saw the Nicosia side earn a point at one of Europe’s most difficult grounds, leaving them level on points with the Germans, with two games remaining

Apoel are set for another memorable European night as they host Champions League holders Real Madrid at the GSP Stadium in Nicosia tonight (9.45pm).

The Cyprus champions’ never-say-die attitude means that they are still in with a chance of making third place in the group, which leads to qualification to the knockout stages of the Europa League.

A spirited display at Signal Iduna Park against Borussia Dortmund last time out saw them earn a point at one of Europe’s most difficult grounds, leaving them level on points with the Germans, with two games remaining.

At the same time, Dortmund will be hosting group leaders Tottenham Hotspur, a game which Apoel fans will be paying close attention to.

Real Madrid will be without captain Sergio Ramos, as the defender suffered a fractured nose from a boot to the face during the Madrid derby on Saturday. Ramos joins goalkeeper Keylor Navas and Welsh star Gareth Bale on the injury table.

Youngsters Jesus Vallejo, Achraf Hakimi and Marcos Llorente return to the squad after being left out for the derby.

A growing concern for the Spanish giants is their strikers’ inability to find the net on a regular basis in La Liga, where they lie ten points adrift of leaders and arch-rivals Barcelona. The 0-0 draw against Atletico Madrid means Karim Benzema and Cristiano Ronaldo have netted just once each in the opening 12 weeks of the domestic campaign.

That said, Ronaldo currently leads this season’s Champions League scoring chart with six goals to his name, including two against Apoel in the 3-0 win in September in Madrid.

One man who is not taking the threat of Benzema and Ronaldo lightly is Apoel’s Spanish goalkeeper Nauzet Perez. The 32-year-old was signed on a free transfer just last month to cover for the injured Boy Waterman and played a starring role on his debut in the 1-1 draw against Dortmund.

“They are not at the level that they were last season,” said Perez. “But it is nothing more than a bad run of form. They are capable of destroying any European team, which is why we must give it our all to get the three points and continue with a chance of making it to the Europa League,” the veteran concluded.

Like Real, Apoel also go into the game on the back of a derby against their local rivals.

Giorgos Donis’ side will be in high spirits following their 3-1 win over Omonia on Friday evening. The win was made sweeter by the fact that Giorgos Efrem, who has missed most of the campaign through recurring injuries, came off the bench to net the third, which raises hopes of him starting against Zinedine Zidane’s men.

Ruled out for Apoel are long-term absentees Waterman, Nicholas Ioannou and Zhivko Milanov.

The two sides have met before in the Champions League, prior to Madrid’s 3-0 win at the Santiago Bernabeu this campaign; Apoel faced Madrid in their famous 2011/12 campaign, where they met in the last eight of the competition, with the Spaniards winning 5-2 at the Bernabeu following a 3-0 win in Cyprus.

Few are placing their bets on Apoel to get a result against the reigning back-to-back European champions but, as ever, a fiercely competitive performance backed by a vocal home crowd is a guarantee tonight.

City must keep their cool despite stellar start, says Kompany