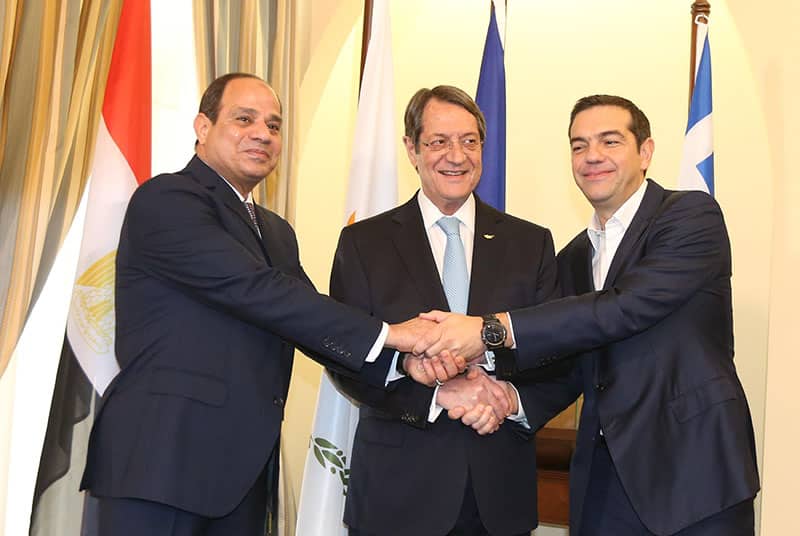 The leaders of Cyprus, Greece and Egypt on Tuesday reaffirmed their commitment to deepening the trilateral partnership among their nations, primarily in the areas of energy, security and counter-terrorism, tourism, technology and innovation.

According to the Joint Declaration of the Fifth Trilateral Summit, held in Nicosia, President Nicos Anastasiades, Egyptian President Abdel Fattah el-Sisi and Greek Prime Minister Alexis Tsipras “expressed their firm commitment to further broaden and deepen their trilateral partnership in various fields of common interest, and to enhance their efforts towards promoting peace, stability, security and prosperity in the Eastern Mediterranean, based on their shared values and interests.”

The heads of state agreed to enhance cooperation in the fields of energy, migration, tourism, the environment, protection of cultural heritage, information and communication technology, agriculture and the diaspora.

At the three-way summit, the leaders inaugurated the Cyprus-Egypt-Greece Collaborative Innovation Network (Ceg Coin), headquartered in Egypt and with branches in Cyprus and Greece respectively.

Ceg Coin will serve as “a platform to enhance collaboration, networking and business matchmaking of the innovation ecosystems of the three countries.”

The three countries’ tourism ministers also signed a protocol aimed at promoting the development and strengthening of cooperation in the field of cruise tourism in the eastern Mediterranean.

On energy, the summit reiterated the need for diversification of energy resources and routes, the security of energy supply and the need to modernise and develop new energy infrastructures.

The leaders welcomed initiatives from the private sector of mutually beneficial energy infrastructure projects which contribute to the energy security of all three countries, such as the EuroAfrica Interconnector.

On Monday, during his official state visit to Cyprus, the Egyptian president had met with the chairman and CEO of the EuroAfrica Interconnector, Nasos Ktorides.

The mooted project is a 1619 km subsea cable that will connect the electricity grids of Egypt, Cyprus and Greece with Europe. 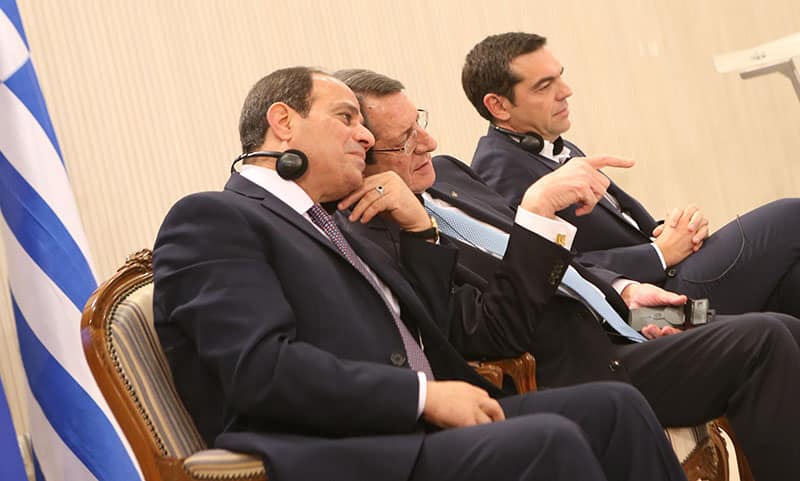 During Tuesday’s summit meetings, the three governments stressed their commitment to “proceed expeditiously with the negotiations on the delimitation of their common maritime boundaries as appropriate.”

The leaders called on Turkey “to cease all illegal activities within the maritime zones of Cyprus and refrain from similar actions in the future.”

On security, the three neighbouring nations agreed to intensify efforts to tackle regional challenges, to fight terrorism in all its forms and manifestations, increase information sharing and promote regional security, long-term stability and prosperity.

They “strongly call on transit countries to share information regarding Foreign Terrorist Fighters (FTFs) with concerned states and international organisations in particular Interpol.”

Anastasiades, Tsipras and Sisi stated that the effective management of large movements of refugees and migrants is the responsibility not only of neighbouring states and of Europe, but also of the international community as a whole.

They also emphasised the “vital importance of strong and solid EU-Egypt relations which will contribute to the peace and stability in both the Middle East and Europe.”

Among others, the leaders discussed the Palestinian issue, and took stock of developments in Syria, Libya, Iraq, Yemen and Lebanon.

Next the three leaders held a three-way meeting, after which Tsipras and al-Sisi met privately.

The three nations’ respective delegations then held expanded talks, chaired by the heads of state.

Anastasiades hosted a working lunch in honour of Sisi and Tsipras.

Speaking at a joint news conference, Anastasiades, referring to his Egyptian and Greek counterparts as “my friends,” called the trilateral mechanism “a model of constructive regional partnership.”

Speaking through an interpreter, Sisi stated that the purpose of the three-way partnership is to promote economic growth but also to serve as a “pillar of security and stability in the eastern Mediterranean.”

For his part, the Greek Prime Minister said the next trilateral summit would be held in Crete sometime in 2018.

He said that “through the trilateral cooperation schemes with Egypt, a very important country in the region, and also with Israel, Lebanon, Jordan, Cyprus and Greece are becoming factors of stability in the southeastern Mediterranean.”