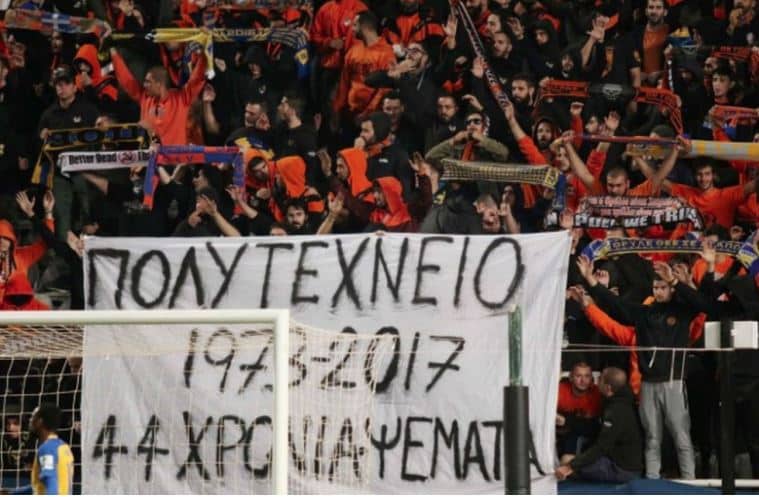 Since Friday evening, and moments after the Omonia vs Apoel football game ended, social media was flooded with comments condemning the actions of a section of the Apoel and Omonia fans during the game.

The Apoel fans had lifted a banner disputing events and deaths that occurred at the Athens Polytechnic (Polytechnio) in November 1973, while at the other end of the GSP stadium, Omonia fans, not to be outdone, lifted a flag of the 17 November terrorist organisation which is responsible for the deaths of at least 23 people.

Akel was the only political party to make an announcement regarding this, but even they, blinkered as they are, could only see the banner lifted in Apoel’s section of the ground. No mention of the 17 November flag nor indeed of another banner waving in the Omonia section that abused in the worst possible way an individual whose only ‘crime’ was to move to Apoel after a brief stint at Omonia.

But I digress, this subject is for sociologists and psychologists.

According to the Cyprus Football Association (CFA) the display of any banners during a football league game that carry political messages or are abusive or insulting, amongst other things, is strictly forbidden.

My question is how were these banners, and two of them could not be concealed very easily, were allowed through? Apart from the banners, there were, of course, the usual firecrackers and flares that forced the match official to delay kick-off by five or so minutes until the smoke from the flares cleared.

In fact, the match official could have demanded the removal of the banners according to CFA rules, but he did not. Although, the CFA could punish both teams with fines.

Maybe I am asking too much from a match official, as he would have been lambasted by club officials and probably the media if he refused to start the game before the removal of the banners.

We were never given an explanation by the police nor by those who employ the game stewards how these forbidden items made their way into the stands.

However, when it comes to a sandwich or a drink the zeal shown by stewards and police to confiscate them at the turnstiles is ‘heart-warming’.

I was a witness a few weeks ago when a father with his two boys were refused entry if they did not leave behind the family’s sandwiches and drinks as they were not allowed to take them into the ground.

The father tried to reason with the officials telling them that this was his kids’ dinner but they were unmoved.

‘There is a canteen inside…buy something from there, the food and drinks stay here’ they retorted.