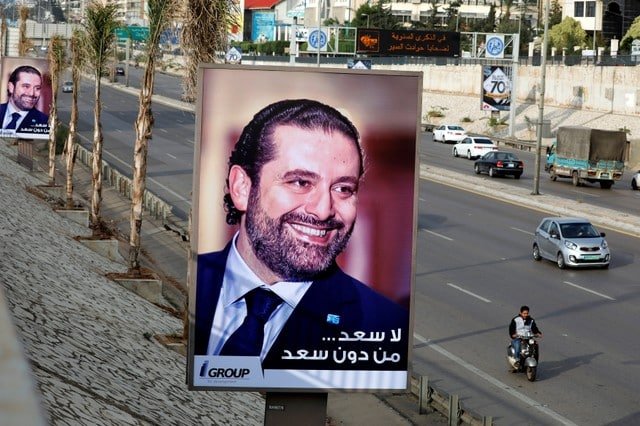 Posters depicting Saad al-Hariri, who announced his resignation as Lebanon's prime minister from Saudi Arabia, is seen at airport high way in Beirut

Lebanon marks its independence on Wednesday with its sovereignty as compromised as ever by the agendas of foreign states that have shaped its history since the French mandate ended in 1943.

The crisis ignited by Saad al-Hariri’s sudden resignation as prime minister is unprecedented even by the standards of a country where loyalties have been split between countries such as Iran and Saudi Arabia regionally and the United States, France and Russia globally.

Hariri is due back in Lebanon on Wednesday for the first time since his resignation in a televised broadcast from Riyadh. Many believe Saudi Arabia made him quit and held him in Riyadh because he was not serving its objectives. Riyadh denies this.

He will take part in independence day celebrations in Beirut after an intervention by Lebanon’s former colonial power France led to him leaving Saudi Arabia for Paris last week.

“Can Lebanese people act the way they want? Are they free to take a decision and follow it? No they cannot. Because there are foreign powers who decide the way things go,” said Antoine Mouawad, a 65-year old charity employee.

“We do not feel independent,” said George al-Basha, 58, an unemployed barber in Beirut’s Achrafiyeh district.

For some Lebanese, the latest chapter in their turbulent history carries echoes of its independence in 1943, when France arrested the president and prime minister. International pressure and popular protests eventually forced their release.

The parallel with Hariri’s situation was drawn by one of Lebanon’s major TV stations at the start of the crisis.

Foreign states have often regarded tiny Lebanon as a theatre for their rivalry, exploiting the fissures between Muslim and Christian sects who have also courted foreign intervention to help them in their struggles with each other.

For years it was the tussle between Israel, which occupied southern Lebanon from 1982-2000, and Syria, which maintained a big military presence across much of the country from 1976-2005, that played out on Lebanese soil. The Palestine Liberation Organisation also controlled much of the country prior to 1982.

Reflecting today’s biggest Middle East rivalry, it is competition between Sunni Muslim Saudi Arabia and Shi’ite Iran that lies behind many accusations of foreign meddling.

Critics of the heavily armed Lebanese Shi’ite group Hezbollah view it as a tool of Iranian policy.

Opponents of Hariri, who was thrust into politics by the 2005 assassination of his father, Rafik, have similarly labelled him as an instrument of Saudi policy.

But the demand for his return has united Lebanese across the political spectrum. Politicians close to Hariri say Riyadh held him against his will and forced his resignation to bust a coalition government that suited Hezbollah.

Posters of Hariri demanding his return to Lebanon, even in areas dominated by his biggest political opponents, reflect widely felt anger at the perceived foreign intervention.

“The most important thing in a country like Lebanon is to understand that independence is a battle that does not stop,” Interior Minister Nohad Machnouk, a member of Hariri’s Future Movement, said on Tuesday as he laid a wreath on Rafik Hariri’s grave.

Saad al-Hariri has also denied being held by Saudi Arabia, and in his resignation speech instead blamed Iran and Hezbollah for Lebanon’s present difficulties.

Wednesday’s independence parade will be held near the central Martyrs Square, where reconstruction from Lebanon’s 1975-90 civil war continues.

In the nearby seaport are moored naval vessels belonging to the UN peacekeeping force Unifil which was established after Israeli’s first invasion in 1978, and expanded after the 2006 war between Israel and Hezbollah.

“What we have seen in the last 10 days or two weeks, this is really crude intervention,” said Sami Atallah of the Lebanese Centre for Policy Studies, a thinktank in Beirut.

“When you have a prime minister who resigns in a capital not his own, it tells you that someone else is giving the orders.”

Syria’s military presence in Lebanon was brought to an end in 2005 by a wave of popular protests and international pressure following the Hariri assassination. A UN-backed court has charged five Hezbollah members over the killing.

The group denies any role.

“Lebanon is tied either to Saudi Arabia or to Iran. It doesn’t have the ability to take actions by itself and politicians are to blame for this,” said Nohad Chelhot, a retired business owner.