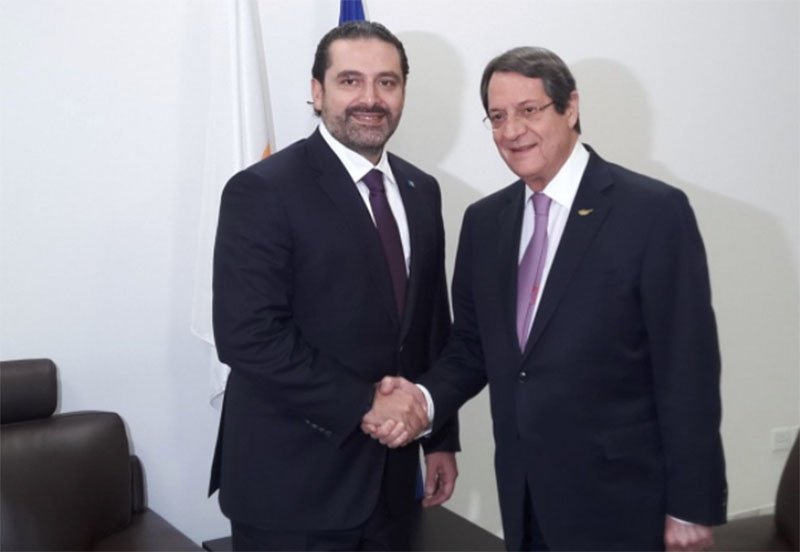 Cyprus on Wednesday said it would attempt to undertake initiatives to help defuse the crisis in neighbouring Lebanon after Saad al-Hariri made an unexpected stopover on the island on Tuesday night.

Hariri met with President Nicos Anastasiades at Larnaca airport for about 45 minutes late Tuesday on his way back to Lebanon, his first visit home since he unexpectedly announced on November 4 he would resign as prime minister. Hariri shelved resignation plans on Wednesday at the request of Lebanese President Michel Aoun.

“I submitted my resignation to President Aoun [on Wednesday] and he asked me to wait for further dialogue on the reasons [for my resignation] and the political background, to which I responded,” he said in a televised address in Beirut.

On Wednesday morning, the Lebanese premier attended the military parade marking the nation’s anniversary of independence.

Hariri had announced his resignation on November 4 from Saudi Arabia, citing a plan to assassinate him.

His prolonged stay in Saudi Arabia prompted speculation that he was being detained, a claim he publicly denied.

Over the weekend, he flew to Paris for a meeting with French President Emmanuel Macron, which appears to have finalised his return to Lebanon.

On the way back, Hariri flew to Egypt, where he met with Egyptian President Abdel Fattah el-Sisi, before stopping over at Larnaca airport for a brief meeting with Anastasiades on Tuesday night.

Al-Hariri’s resignation sent shock waves across the Middle East, threatening to cause instability in Lebanon.

Speaking on state TV on Tuesday morning, the Cypriot government spokesman said the coming days will be “crucial for Lebanon’s future”.

“Specific initiatives will be undertaken in the next few days aiming to normalise the situation in Lebanon,” he said.

“The Republic of Cyprus can play a significant role in the effort via its European Union membership and the traditionally good relations it has had with Arab countries.”

Noting that the government of Cyprus considers the fact that al-Hariri chose to visit Cyprus before returning home as “extremely important”, Christodoulides said Anastasiades “will have telephone contact with foreign leaders with regard to the issue of Lebanon”.

The spokesman added that Saudi Arabia, an Hariri ally, has extended Anastasiades an invitation to visit the kingdom.

Asked whether developments in Lebanon are likely to impact regional energy plans, Christodoulides said “not only that”.

“In addition to energy plans, [it is likely to impact also] the regional security factor,” he said.

“Let me remind you that, prior to arriving in Cyprus, Mr Hariri had an extensive meeting with the president of Egypt and the issues discussed included the need for regional stability.”

In a statement, ruling Disy lauded Anastasiades’ support to Hariri.

“The support offered by the president to the prime minister of Lebanon builds on the close friendly ties with our neighbour,” spokesman Prodromos Prodromou said.

“Cyprus joins forces in its efforts with those of France and Egypt. We hope and wish for normalcy to return to Lebanon.”

Anastasiades’ political stature has “given our country gravitas beyond its geographical size”, he added.

“From this position we can seek stability, security and co-operation,” Prodromou said.

Part of Limassol-Nicosia highway to close for roadworks