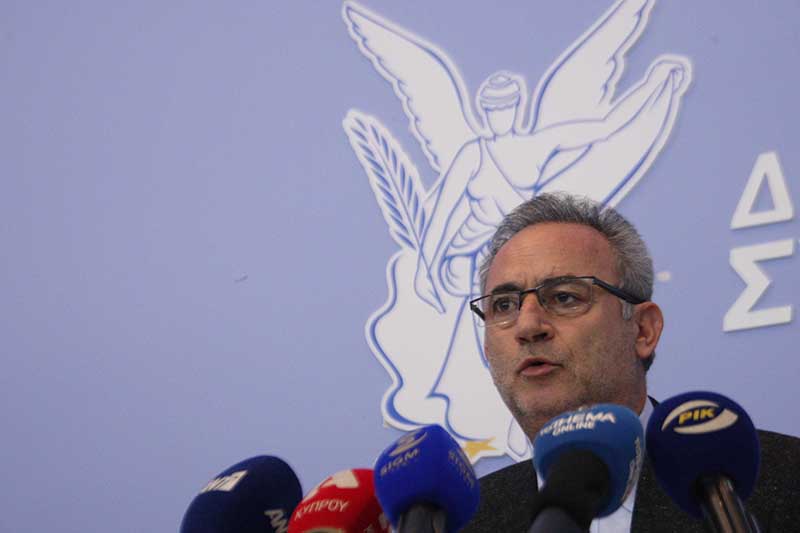 A solution to the Cyprus problem would enhance economic cooperation in the region, Disy leader Averof Neophytou told the ambassadors of Arab countries in Cyprus during a lunch he hosted for them on Wednesday in Nicosia.

“Our culture is close to the people of the Middle East and our countries already enjoy relations of true friendship. Relations that can only be enhanced with further economic cooperation,” he said.

The overall business environment, tax system, bilateral double tax agreements and the level of professional services offered in Cyprus could further facilitate investments from the Middle East and the Arab world acting as a stable gateway of investments to countries of the EU, he added.

“Enhanced by the growth prospects of Cyprus, already growing at 3.9 per cent, we can only imagine the prospects of a united Cyprus,” Neophytou said.

The Disy leader told the ambassadors that Cyprus has always maintained and enjoyed very good relations with countries of the Arab world, the Middle East and countries beyond Europe. In an era of growing regional and global insecurity and asymmetrical threats, Cyprus was a growing pillar of stability in the region and one of the important elements of Cyprus’ foreign policy was based on reaching out to its neighbors to build regional cooperation, he said.

Neophytou mentioned the trilateral cooperation mechanisms that had come about including key regional players and Greece.

“But our greatest hope is to emerge as a symbol of hope as well. A comprehensive settlement of the Cyprus problem, an international problem which has been on the agenda of the United Nations for four decades, will offer hope that even the most complicated problems can be solved peacefully through dialogue. Such a solution will constitute a model where Christians and Muslims can peaceful coexist and live side by side,” he added.

The key to this was the need for a settlement on the Cyprus issue to lead to a truly independent and sovereign federal state, a goal, he said that was not shared by Turkey in Crans Montana last July when talks on security and guarantees collapsed.

“Despite our disappointment, our determination to continue the process at the point it was interrupted is clear and it was conveyed to the UN Secretary General by President Anastasiades,” said Neophytou.

“Our will to achieve a comprehensive, lasting and viable solution to the Cyprus problem based on a bi-communal, bi-zonal federation is intact and stronger than ever.”

Reaching such a settlement would allow Cyprus to utilise its full potential for economic growth, prosperity and peaceful co-existence for all its citizens in a country which fully respects their fundamental human rights and freedoms, he added.

“The best guarantee for Cyprus and its people is the EU itself. The combination of political and economic security and stability, and our capacity as an EU member-state will further amplify the competitive advantages provided by our geographic position.”

Turkey, he said, remained the missing link and it was critically important to have concrete actions from Ankara that put flesh on the public statements that it was committed to the solution of the Cyprus problem.