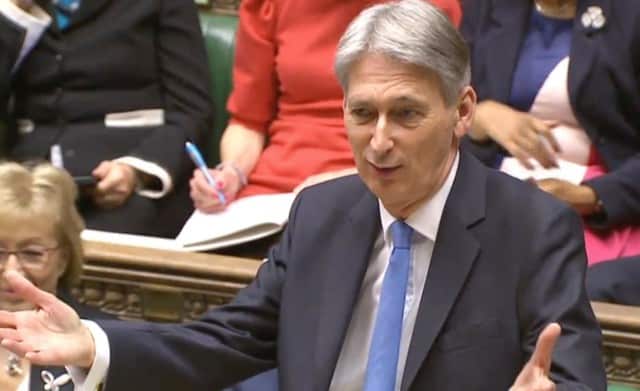 Britain's Chancellor of the Exchequer Philip Hammond presents his budget in the House of Commons, London

Britain slashed its growth forecasts for its Brexit-bound economy and expects to borrow a lot more going into the next decade, finance minister Philip Hammond said on Wednesday as he delivered a gloomy budget statement in parliament.

Slower economic growth will mean lower tax revenues for Hammond to spend on the kind of bold moves that many in his Conservative Party – still smarting from an election mauling in June – had demanded.

But Hammond sought to show he could help voters by abolishing a duty for first-time buyers on the purchases of homes worth up to £300,000, keeping a freeze on fuel duty and spending more on the health service.

He also committed £44 billion to provide funding, loans and guarantees over five years in a bid to deliver 300,000 net additional homes per year on average by the mid-2020s, addressing Britain’s acute housing shortage.

Hammond said he had to keep his focus on fixing Britain’s public finances as he steers an economy growing only weakly – even when the global economy is picking up – through a challenging period as it prepares to leave the European Union.

“We took over an economy with the highest budget deficit in our peacetime history,” he told parliament.

“Since then, thanks to the hard work of the British people, that deficit has been shrinking and next year will be below 2 per cent. But our debt is still too high,” he said.

But Britain’s official budget watchdog said the spending plans for the next two years were a “significant giveaway” as Hammond sought to cushion the Brexit slowdown.

At a time when inflation has risen sharply and wages have grown only slowly, many voters are increasingly angry about years of spending cuts in many areas of public services, something Hammond acknowledged in his speech.

“We understand the frustration of families where real incomes are under pressure,” he said.

He said that employment was expected to rise and that he would reduce the delays in receiving benefit payments that many families have suffered under changes to the welfare system.

Hammond also sought to help British businesses by slowing the pace of increase in the so-called business rates tax on the premises they occupy, and he raised a tax credit for research and development.

But the limitations on Hammond were clear as he said the war chest he wants to keep in reserve to help the economy had almost halved in size.

He said his so-called “fiscal headroom” – taking into consideration his budget targets – now stood at £14.8 billion, down from the £26 billion expected in March.

Britain’s budget forecasters now expect gross domestic product will grow by 1.5 per cent in 2017, compared with a forecast of 2.0 per cent made in March, reflecting a slowdown this year as the Brexit vote weighed.

The Office for Budget Responsibility saw growth in 2018 at 1.4 per cent, down from its previous forecast of 1.6 per cent, Hammond told parliament.

Its revisions for later years were more acute: GDP growth forecasts in 2019 and 2020 stood at 1.3 per cent in both years compared with 1.7 and 1.9 percent respectively seen in March.

“There is a recognition from the OBR that the growth outlook is dire at a time when the world economy is enjoying a synchronized upswing. Germany is enjoying a boom and even Italy is growing faster than the UK,” said Daiwa Capital Markets Europe’s Chris Scicluna.

The OBR had been expected to take a gloomier view after it said in October that it would lower its projections for productivity growth in the years ahead.

Many lawmakers had called on Hammond to produce a bold budget to turn around the fortunes of Prime Minister Theresa May who lost her parliamentary majority in a failed election gamble in June, is struggling to make headway in Brexit negotiations with the EU and recently lost two ministers from her cabinet.

As well lower tax revenues, slower growth will add to the challenge of turning Britain’s budget deficit into a surplus by the mid-2020s.

Hammond said the OBR now expected Britain would borrow less this year and in the 2018/19 fiscal year but more in the following years as the slowdown in the economy bites.

Britain is expected to run a budget deficit of 1.3 per cent of GDP by the 2021/22 financial year, almost double the previous estimate of 0.7 per cent.

Before last year’s Brexit vote, Britain had been aiming to post a budget surplus by the end of this decade, itself a delay from an original target of fixing the public finances by 2015.

There was some better news for the public finances – Britain’s debt was expected to peak at 86.4 per cent of GDP this year – about double its level before the global financial crisis – before falling in the coming years.

The OBR budget forecasters said the fall in net debt was largely achieved by the sales of shares in state-run bank RBS and by an accounting switch to get the debt of housing associations off the government’s books.