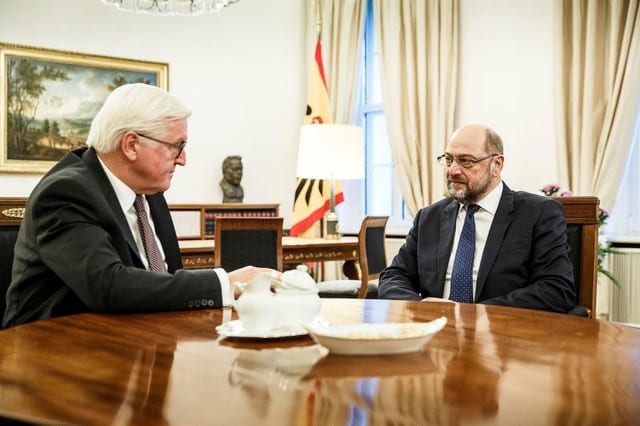 Germany’s Social Democrats (SPD) should reconsider their opposition to joining a new “grand coalition” with Angela Merkel’s conservatives because Europe needs a stable government in Berlin, a senior ally of the chancellor said on Thursday.

Germany is facing the worst political crisis of its modern history after Merkel’s efforts to forge a three-way coalition with the pro-business Free Democrats (FDP) and Greens collapsed last weekend, raising fears across Europe of a prolonged leadership vacuum in the continent’s economic powerhouse.

The SPD has governed in coalition under Merkel since 2013 but said it wanted to go into opposition after suffering its worst result of the postwar period in the Sept 24 election.

Some in the SPD, however, are now urging party leader Martin Schulz to reconsider, a view echoed on Thursday by Volker Kauder, leader of Merkel’s conservative parliamentary group in the Bundestag lower house of parliament.

“It’s my wish that the current partners in the coalition government can get together again,” Kauder told Suedwest Presse newspaper.

Schulz is due to meet President Frank-Walter Steinmeier, a former SPD lawmaker and foreign minister, at 1400 GMT. Steinmeier is trying to help facilitate a coalition government and avoid fresh elections.

Schulz will then consult senior party members at the SPD’s Berlin headquarters, SPD sources said. No statements are expected after the SPD meeting.

“We will talk about if and how one can get a federal government in Germany,” a senior SPD member said, adding that one option on the table was to support Merkel only indirectly by not blocking a minority government.

Changing course and teaming up with Merkel’s conservatives again could require a change of leadership at the SPD – an outcome unlikely before a party conference on Dec 7-9.

“Europe is waiting for a Germany capable of acting so that it can finally respond to the questions raised by French President (Emmanuel) Macron. The economically strongest country in Europe cannot show itself as a political dwarf,” he said.

Kauder was referring to Macron’s call for fiscal reforms to strengthen the eurozone.

Germany, the world’s fourth largest economy, has long been a bastion of stability in the EU, and officials in Brussels and Paris fear months of political uncertainty could harm plans to reform euro zone governance and EU defence and asylum policies.

Merkel, who remains acting chancellor until a government is agreed, has said she would prefer to work with the SPD, but if that option fails, she would favour new elections over an unstable minority government.

Another election would also provide no speedy resolution of the crisis. Under Germany’s constitition, the president could call another election only after Merkel had lost several votes in the Bundestag — a process that could take several months.

The mass-circulation Bild newspaper reported on Wednesday that 30 members of the SPD’s 153-strong parliamentary group this week had questioned Schulz’s preference for going into opposition during a meeting of the parliamentary party.

Speaking to ZDF television on Thursday, SPD deputy leader Karl Lauterbach said his party might have to rethink its opposition to another “grand coalition”, but added he was still sceptical about joining one led by Merkel.

The SPD supports Macron’s proposal to create a fiscal capacity in the eurozone to protect members of the single currency bloc against external shocks.

If the SPD changes tack about a “grand coalition”, however, the leader of Merkel’s sister Bavarian party, the Christian Social Union (CSU) said on Thursday it should not expect the conservatives to grant any significant concessions.

“We can’t be blackmailed,” said Horst Seehofer, who faces a decision later on Thursday on whether he remains as CSU leader.

“We have a tight cooperation between (Merkel’s) Christian Democatic Union and the CSU. We have clear positions on substance that cannot be reversed,” Seehofer told reporters.