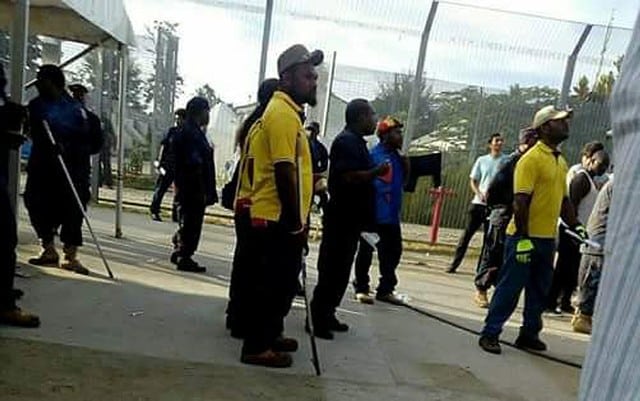 Papua New Guinea police sealed off an officially shuttered Australian-run detention camp on Thursday and ordered asylum seekers occupying it to leave as they confiscated food and water the men had stockpiled, asylum seekers told Reuters.

About 380 asylum seekers have shut themselves inside the Manus Island Centre for more than three weeks, defying attempts by Australia and Papua New Guinea (PNG) to close it in a standoff the United Nations described as a “looming humanitarian crisis”.

Many of the men climbed onto rooftops and hid in toilets, he said. Three other asylum seekers gave similar accounts of the police action.

A video shot by Sudanese refugee Abdul Aziz and posted on Facebook showed police using a megaphone to tell the asylum seekers to leave because their stay at the camp, located on land used by the PNG navy, was illegal.

Footage he later posted on Twitter showed men boarding mini buses and buses. Tim Costello, chief advocate at the World Vision Australia aid group, told Reuters by phone from outside the camp that he had seen buses leaving.

Calls to PNG immigration and police were not returned.

The Manus island camp in PNG, and another on the tiny Pacific island nation of Nauru, have been the cornerstones of Australia’s controversial immigration policy, which has been strongly criticized by the United Nations and rights groups.

Australia opened the camps in a bid to stem a flow of asylum seekers making dangerous voyages by boat to its shores.

Under its “sovereign borders” immigration policy, Australia refuses to land asylum seekers arriving by sea, instead sending them to the offshore camps.

‘WE WON’T BE PRESSURED’

Witnesses in the camp said officials in army fatigues led away Kurdish journalist Behrouz Boochani, who has been at the camp for four years and regularly posts social media messages on conditions.

Pictures sent via a messaging service showed upturned boxes of food and torn parcels of rice and instant noodles and smashed furniture including broken beds.

PNG’s Supreme Court ruled last year that the centre, first opened in 2001, breached its laws and fundamental human rights, leading to the decision to close it.

But the asylum seekers say they fear for their safety if moved to a transit centre also on the island, and risk being resettled in PNG or another developing nation permanently.

“We don’t want another prison. We want to leave this place, but they need to give a good solution for us,” the first asylum-seeker said.

“We don’t want another prison. We want a third country.”

Most of those in the camp are from Afghanistan, Iran, Myanmar, Pakistan, Sri Lanka and Syria.

“They think this is some way they can pressure the Australian government to let them come to Australia. Well, we will not be pressured,” Turnbull said.

The United Nations has urged Australia to accept an offer by New Zealand to take some of the men.

‘Live actions’ take a museum out of its ordinary state