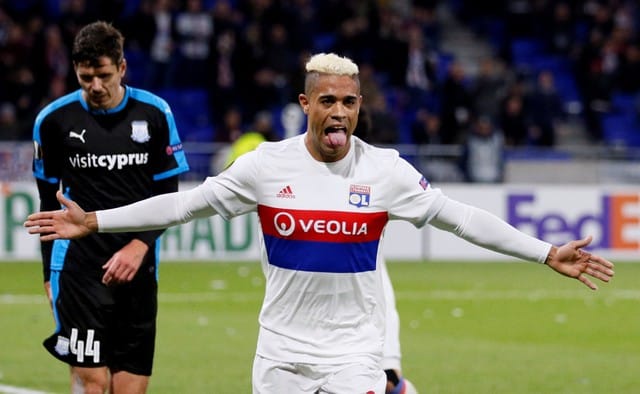 The scoreline was rather harsh on the visitors, but a handful of spurned chances at one end followed by errors at the other inevitably led to Lyon claiming the three points.

Valentin Roberge, returning from a two-match ban, was back in the lineup and evidently keen to make an impact back in his native France.

The defender unleashed a rasping effort from all of 35 yards, forcing goalkeeper Anthony Lopes into a good save early on.

As they have shown throughout the tournament so far, Apollon were not taking the challenge lying down.

Antonio Jakolis put in a teasing cross from the right which found Anton Maglica in front of goal but the forward got too much behind the ball and lashed over the bar.

As bad fortune would have it, it would be Maglica’s last involvement in the game after falling awkwardly from the attempted strike on goal, with the goalscorer of Apollon’s late leveller against Atalanta, Emilio Zelaya, taking his place.

The Argentinian would have a massive chance of his own moments later but the striker mistimed his stride and ended up kicking thin air from another pinpoint Jakolis pass.

Lyon have been a force at home this campaign, both in Europe and in Ligue 1, but were finding it difficult to get into their usual rhythm.

Facing the most potent front three in domestic European football in the form of Mariano Diaz, Nabil Fekir and Memphis Depay – with 26 goals combined in Ligue 1 this campaign – Apollon knew they had their work cut out.

Which was why Lyon’s opener on 29 minutes would have been all the more painful. Despite limiting the trio to absolutely nothing in the opening half hour, captain Bruno Vale’s fumble in the six-yard-box handed Mouctar Diakhaby an unmissable tap-in to give the hosts an unjust lead.

Just three minutes later, it was 2-0. A quick breakaway ended with Depay chipping the ball to the back post where captain Fekir was waiting, and from that position there is usually only one outcome. A composed chest to bring it down followed by a scissor-kick finished gave Vale no chance.

Jakolis continued his excellent display down the right. This time, Zelaya connected well with his head but the effort was superbly stopped by Lopes

Yet, as was the case in the first half, Lyon pinched a goal with Apollon in the ascendency. Houssem Aouar picked out Mariano Diaz and the former Real Madrid striker sent Vale the wrong way with a calm header into the corner. Myziane Maolida added a fourth in the last minute to add further insult to injury.

It was a good display from the visitors, far different to what the scoreline suggested, but the individual quality of Lyon was ultimately the deciding factor.

In the group’s other game, Atalanta defeated Everton at Goodison Park 2-1, which leaves the Italians joint-top along with Lyon, both on eleven points.

In the final round of group matches on 7 December, Lyon and Atalanta will battle it out for first place at the Mapei Stadium while Apollon host Everton at the GSP, where the Limassol club will secure third spot should they avoid defeat.

Villarreal and Nice head into Europa League knockout round

Our View: Outrage over minister’s election participation is unjustified