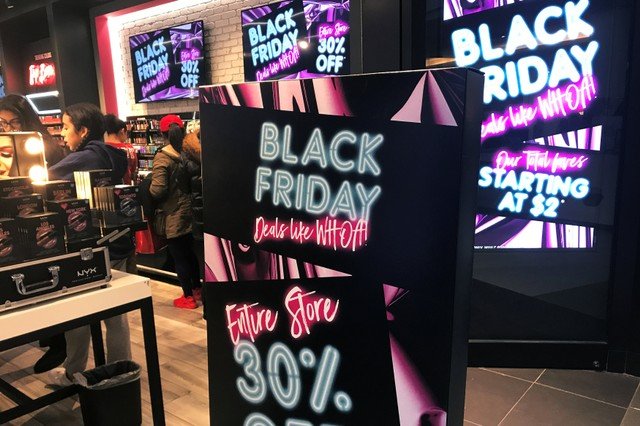 Violence in Missouri and Alabama marred an otherwise subdued start to the U.S. holiday shopping season as bargain hunters flocked to malls for Black Friday deals.

One person sustained life-threatening injuries after a shooting in the parking lot of the Columbia Mall in Columbia, Missouri, KMIZ television reported, adding that officers could not confirm whether the shooting was accidental or deliberate.

Early-morning crowds were generally light on Black Friday as more people picked up deals online and the traditional rush was split by stores opening the night before.

The period between the U.S. Thanksgiving holiday and Christmas can make or a break a retailer, accounting for as much as 40 percent of total revenue for the year. The day after Thanksgiving is traditionally when retailers offer “doorbuster” deals attracting frenzied bargain hunters.

Apart from the Alabama report, there were few signs of frenzy early on Friday.

Tricia Welch, 36, a customer service executive at a bank, stood in line for about an hour before getting into the store.

“There are definitely more discounts available through the year now than say four to five years ago … we only buy electronics or appliances on Black Friday.”

Miguel Flores, 43, an overnight security guard, visited the store after his shift ended.

“I mostly shop online but decided to drop in because I haven’t been to a store in a long time,” Flores said. “I bought some video games for my nephew a few days ago. The deals were pretty good then, too. In fact I was just looking at some of them today and the deals are similar.”

NOT WHAT IT USED TO BE

Enticing shoppers with Black Friday deals is especially important for brick-and-mortar retailers given the continued switch to online shopping, led by Amazon.com Inc, which has forced chains such as Toys R Us, apparel retailers True Religion, The Limited, Rue 21 and off-price retailer Payless Shoe Source to file for bankruptcy this year.

Amazon began touting its sales for “Cyber Monday” – one of the biggest days for online shopping – on Friday and said shoppers using its digital assistant Alexa could score deals as early as Sunday.

Wal-Mart, Target, Macy’s, JC Penney and other major retailers opened their stores on Thursday evening and most have been offering extended holiday deals online starting as early as October instead of limiting them to one day. Some started offering in-store deals earlier this week to whet shoppers’ appetites.

Garden State Plaza in Paramus, New Jersey, was crowded but not chaotic. Shoppers came for deals with nothing specific in mind. Those who came enjoyed the experience of trying on clothes rather than shopping online.

“Black Friday isn’t what it used to be because stores are extending their sales into the weekend and you can shop online,” said Unmesh Patel, 30, a project manager. “I also come for the rush even though it lessens every year.”

A Macy’s employee at the mall said it was less busy on Friday because the store had been open, and packed, on Thursday.

U.S. shoppers had spent more than $1.52 billion online by Thanksgiving evening, a 16.8 percent year-over-year increase in online spending, by 5 p.m. (2200 GMT) on Thanksgiving, according to Adobe Analytics, which tracked 80 percent of online transactions at the top 100 U.S. retailers.

“They’re all online,” said Sarah Jones, 42, an employee at Roosevelt Field Mall on Long Island. “Right now they’re at toy stores and electronic stores. They’ll trickle in a little later and we’ll be waiting. I’ve worked in retail my whole life, trust me.”

The challenge for retailers will be to convert the early spending into a desire to spend throughout the season and to go beyond deep discounts, NPD Group Chief Industry Analyst Marshal Cohen said in a note.

Mnangagwa vows to rebuild Zimbabwe and serve all citizens