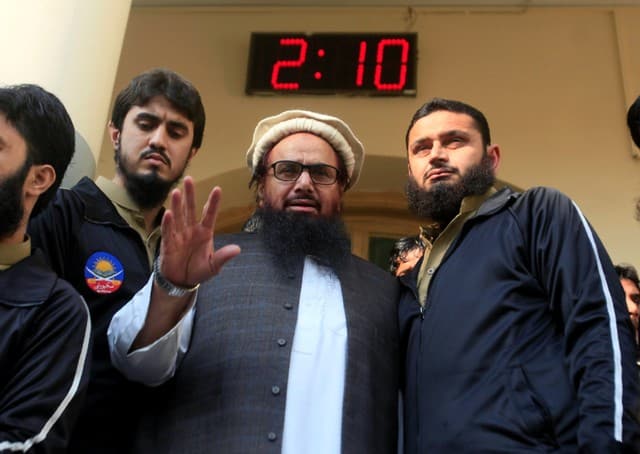 A newly freed Pakistani Islamist accused of masterminding a bloody 2008 assault in the Indian city of Mumbai called ousted former Prime Minister Nawaz Sharif a “traitor” on Friday for seeking peace with neighbour and arch-foe India.

The release of Hafiz Saeed from house arrest raised fresh questions as to whether Saeed might enter politics to run a new, unregistered political party founded by his supporters.

India and the United States expressed concern at his release, calling for Saeed to be prosecuted over the Mumbai attack that killed 166 people, including Americans.

Saeed, who has a $10 million US bounty on his head, spoke at Friday prayers in a mosque in the city of Lahore after being freed from house arrest by a court that said there was no evidence to hold him.

Saeed was placed under house arrest in January while Sharif was still prime minister, a move that drew praise from India, long furious at Saeed’s continued freedom in Pakistan.

In July, a Supreme Court ruling disqualified Sharif from office over a corruption investigation, though his party still runs the government with a close ally as prime minister.

Saeed, however, said Sharif deserved to be removed for his peace overtures with Indian Prime Minister Narendra Modi.

“Nawaz Sharif asks why he was ousted? I tell him he was ousted, because he committed treason against Pakistan by developing friendship with Modi, killers of thousands of Muslims,” Saeed said.

A US official said Washington was “deeply concerned” about the release.

“The Pakistani government should make sure that he is arrested and charged for his crimes,” US State Department spokeswoman Heather Nauert said.

Saeed has repeatedly denied involvement in the 2008 Mumbai violence in which 10 gunmen attacked targets in India’s largest city, including two luxury hotels, a Jewish centre and a railway station.

The assault brought nuclear-armed neighbours Pakistan and India to the brink of war.

“I’m happy that no allegation against me was proved,” Saeed told supporters after his release, according to a video released by the Jamaat-ud-Dawa (JuD) Islamist charity, which he heads.

The United States says the JuD is a front for the Lashkar-e-Taiba (LeT) militant group, which Saeed founded and which has been blamed for a string of high-profile attacks in India.

Pakistan officially banned the Lashkar-e-Taiba in 2002.

Saeed blamed India for his incarceration in Pakistan, saying “Pakistan’s rulers detained me on the aspiration of Modi because of their friendship with him”.

Saeed has long campaigned in support of Muslim separatists in the Indian-ruled portion of the divided Himalayan region of Kashmir, which Pakistan also claims.

India accuses Pakistan of supporting the LeT and other separatists battling in the Indian part of Kashmir. Pakistan denies that.

While Saeed was under house arrest, his JuD charity launched a political party, the Milli Muslim League (MML), which has won thousands of votes in by-elections.

Senior government and retired military figures say the party has the backing of Pakistan’s powerful military. The military denies any direct involvement in civilian politics.

MML officials have privately said that the party is controlled by Saeed, but it is not clear if Saeed will seek to contest elections or launch a political career.

German SPD considers propping up Merkel, but only if members agree