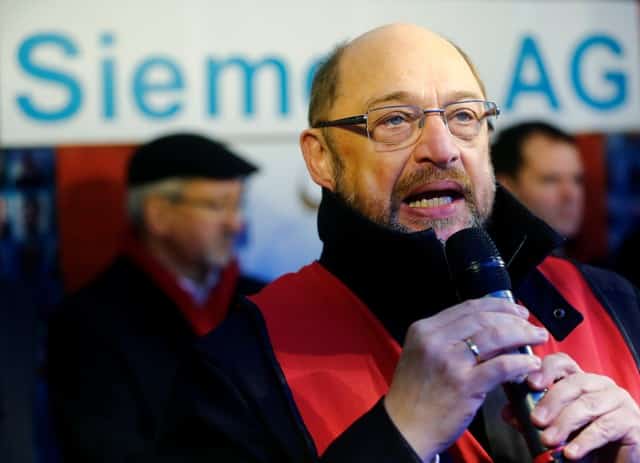 Germany’s Social Democrats agreed on Friday, under intense pressure, to hold talks with Chancellor Angela Merkel on renewing their outgoing coalition government, but pledged that party members would have final say on any deal.

The turnabout by the centre-left party, which had said it would go into opposition after suffering its worst result in 70 years in September’s election, could help avert a disruptive repeat poll in Europe’s economic and political powerhouse.

SPD leader Martin Schulz told a news conference that party leadership had reached the decision out of a sense of responsibility to Germany and Europe after Merkel’s attempt to form a government with two smaller parties collapsed on Sunday.

“There is nothing automatic about the direction we are moving in,” Schulz said. “If a discussion results in us deciding to participate, in any form whatsoever, in the formation of a government, we will put it to a vote of party members.”

Rainer Haseloff, CDU premier of the eastern state of Saxony-Anhalt, told Reuters: “I think opinion is moving in the direction of there being a grand coalition, with Merkel as chancellor, at the end of the process …

“We are open to conversations when the SPD come with their proposals, but there will be a Chancellor Merkel and we won’t budge from that,” he said.

Merkel spoke with reporters after an event in Brussels, but declined to answer any questions.

For the SPD, the decision on whether to support another Merkel government is a fraught one; voters rewarded its four years of constructive participation in the last Merkel-led government with the SPD’s worst result since World War Two.

Over her 12 years in power, Merkel has seen off a succession of coalition partners who then went to endure painful electoral defeats. A cartoon published by Cicero magazine on Friday depicted the SPD as a mouse being enticed out of its hole by a waiting feline Merkel.

Steinmeier, until recently SPD foreign minister, has urged his former party to go back on its pledge to go into opposition, having made clear that he saw fresh elections as a last resort.

The crisis has arisen because Merkel’s conservatives also lost votes in September as the anti-immigrant Alternative for Germany surged into parliament. With the SPD licking its wounds, an unlikely looking three-way coalition with the pro-business Free Democrats (FDP) and ecologist Greens appeared the only option for the weakened chancellor.

No impact on real estate from Chinese ban so far