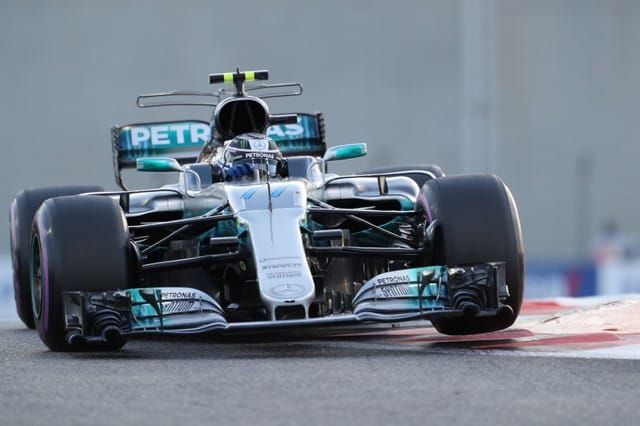 The pole was the Finn’s second in a row, and fourth of the campaign, and he was determined to convert it into a victory after missing out in Brazil two weeks ago.

“I was so gutted in the last race being on pole and missing the win. I have a clear target for tomorrow,” said Bottas after lapping under the floodlights with a best time of one minute 36.231 seconds.

Hamilton, who had been aiming for his 12th pole of the year, was behind Bottas after the first flying laps of the final session and was unable to improve on his time.

“What a lap! He just had an incredible qualifying and congratulations to him,” said Hamilton, who clinched his fourth championship in Mexico last month, as he saluted Bottas in front of the crowd.

“The last qualifying of the year and I gave it everything but I seem to have lost a little pace going into qualifying. Valtteri did an exceptional job, so I’m really happy for him,” added the Briton, who won from pole last year.

“Either way, it’s been an incredible year of qualifying and one that I’ve really enjoyed.”

Hamilton will end the season with 72 career poles, an all-time record for the sport, after passing Michael Schumacher’s previous best of 68 at the Italian Grand Prix in September.

Mercedes have already clinched their fourth successive constructors’ championship, leaving Sunday’s race with little at stake for top teams beyond bragging rights to take into the winter break.

Ferrari’s Sebastian Vettel qualified third with Australian Daniel Ricciardo lining up alongside him on the second row of the grid for Red Bull.

Vettel beat Bottas to the victory in Brazil, his fifth of the year, and is on course to become the first non-Mercedes driver in four years to finish the championship in the top two with a 22 point advantage over third-placed Bottas.

While he hoped to challenge for the win on Sunday, the German did not sound overly confident.

“Tomorrow with the race pace I think we can be a bit closer but they (Mercedes) have been very strong,” said Vettel, also a four times world champion and three times winner at Yas Marina with Red Bull.

“It should be a fun race, overtaking is not always straightforward but not impossible here so let’s see.”

Brazilian veteran Felipe Massa concluded the final qualifying of his Formula One career with 10th place for Williams.

“It’s a good way to retire, good races, good lap times. I’m happy that I’m finished with my head up and competitive,” he said.

“I want to have fun tomorrow. I have nothing to lose, risk everything you can. Let’s have fun.”

Renault seized the initiative in the tight battle for sixth place with Nico Hulkenberg qualifying seventh and Carlos Sainz 12th.

Millions of dollars of prize money are at stake on Sunday, with Toro Rosso four points clear of Renault who are in turn two ahead of U.S.-owned Haas.

EBA: Increase in coverage ratios in Cyprus may lead to higher reduction in NPLs