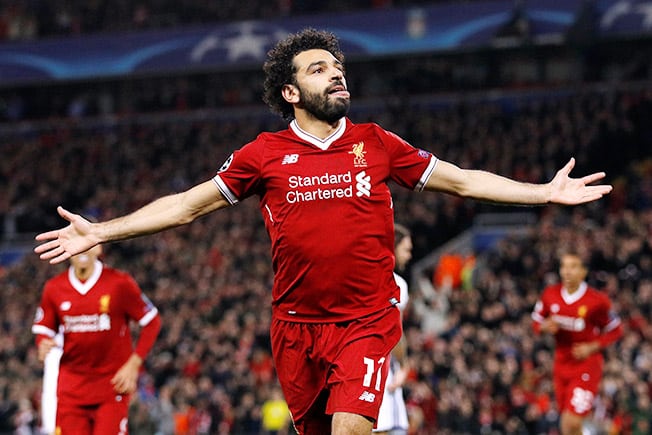 Liverpool livewire Mohamed Salah, signed for £34 million, has scored 14 goals in all competitions so far this season and will relish the chance to show Chelsea fans what he can do when the champions visit Anfield on Saturday evening

Liverpool’s Mohamed Salah could be excused for celebrating a little more loudly than normal if he scores against Chelsea in the standout clash in the Premier League this weekend.

The Egypt striker endured a miserable time at Stamford Bridge after joining Chelsea from FC Basel in 2014 – making only a handful of appearances and scoring twice before being shipped out on loan to Fiorentina.

Via a move to AS Roma, where he became a crowd favourite, Salah joined Liverpool in the close season and has not looked back.
The 25-year-old livewire, signed for £34 million, has scored 14 goals in all competitions so far this season and will relish the chance to show Chelsea fans what he can do when the champions visit Anfield on Saturday (7.30pm).

Liverpool manager Jurgen Klopp has a fearsome frontline, including fit-again Sadio Mane who scored in the topsy-turvy 3-3 draw at Sevilla in the Champions League on Tuesday when the Merseysiders surrendered a three-goal lead.

But Salah’s contribution from a wide position has been particularly spectacular – not that Klopp ever doubted it.
“He was a kid when he came to Chelsea, now he’s a man,” the German said.

Former Chelsea midfielder Frank Lampard believes Salah poses a significant threat to his old side, who will arrive at Anfield having won four league games in a row.

“Salah is absolutely on his game. He’s superb,” Lampard told BT Sport on Tuesday, before the game in Sevilla that left both teams still battling for a place in the last 16.

While Liverpool’s capitulation in Spain ruined the momentum built up by three league wins, Klopp’s side have conceded only one league goal at Anfield this season and the German is yet to lose to Chelsea in five clashes since taking over two years ago.

They start fifth, three points behind third-placed Chelsea who might be suffering the effects of their long Champions League trip to Azerbaijan where they beat Qarabag 4-0 on Wednesday.

Both sides are already being left behind by leaders Manchester City who have racked up 17 straight victories in all competitions, including 10 in the Premier League.

City face Huddersfield Town away on Sunday (6pm) by which time Manchester United could have cut their lead to five points if they beat buoyant visitors Brighton & Hove Albion (Saturday 5pm).

City are only three short of the record winning streak in a Premier League season set by Chelsea, last term, and Arsenal.

Arsenal, in sixth place, face a testing trip to high-flying Burnley (Sunday 4pm), hoping to prove that an impressive 2-0 win over Spurs can provide a platform for a sustained upward push.

Two crucial games at the top in Cyprus