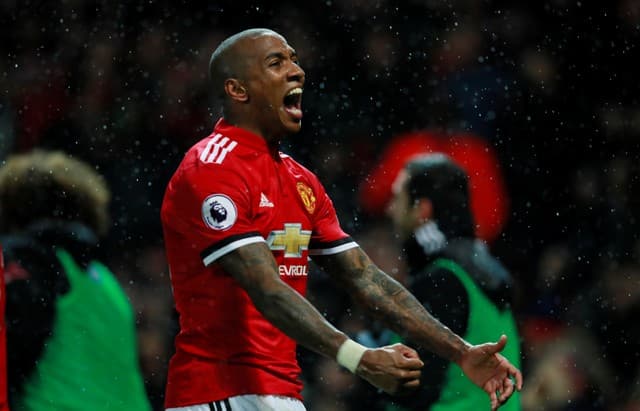 Manchester United saw off a determined Brighton & Hove Albion 1-0 on Saturday to reduce Manchester City’s lead at the top of the Premier League to five points, while the three teams below them all dropped points.

Liverpool and Chelsea drew 1-1 at Anfield while Tottenham Hotspur’s pursuit stalled with a home draw against West Bromwich Albion.

Those results offered an opportunity to Arsenal and surprise packets Burnley, either of whom would move into fourth if they win Sunday’s meeting at Turf Moor.

With Manchester City on 34 points from 12 games, neighbours United took closer order on 29 points from 13 games, ahead of Pep Guardiola’s leaders visiting Huddersfield Town on Sunday.

Chelsea have 26 points in third place but Tottenham stayed fourth on 24 while Liverpool are fifth on 23. Arsenal and Burnley both have 22.

Manchester United’s unbeaten home record stretches back to when City beat them in September 2016, but it was not plain sailing against promoted Brighton, who proved spirited opposition in the first league meeting between the sides since 1983.

“Brighton deserved more than they got,” United’s manager Jose Mourinho told Sky Sports. “They played really well and when they had the ball they were dangerous.”

Liverpool’s recent high-scoring run came to an end in the day’s late game when it looked as if Mohamed Salah’s 64th minute goal against his old club would earn a crucial win.

Instead, substitute Willian’s mishit cross five minutes from time eluded goalkeeper Simon Mignolet to become only the second goal Juergen Klopp’s side have conceded at home in seven league games.

“Chelsea fought hard and deserved a point,” said Klopp, who was angry that the officials took so long to allow a substitution just before Antonio Conte’s side scored.

“We wanted to go to five at the back, to change the situation and it’s not too cool to have conceded,” he added.

They were behind at halftime to an early goal by Salomon Rondon and needed an equaliser from the ever-reliable Harry Kane 16 minutes from fulltime to salvage a draw.

Bottom club Crystal Palace earned only their second win of the season as a goal by Mamadou Sakho in added time beat visiting Stoke City 2-1.

A brilliant individual effort by Xherdan Shaqiri eight minutes after halftime ensured they would not keep a first clean sheet, but within three minutes new England international Ruben Loftus-Cheek, on loan from Chelsea, scored the equaliser.

Sakho’s winner, jabbing in a rebound off the post, brought Palace within three points of 17th-placed West Brom.

“That goal is worth its weight in gold,” said manager Roy Hodgson.

His team made up two points on Swansea City, who could only draw 0-0 at home to Bournemouth.

The Welsh side were upset to have a goal disallowed just before the interval when Wilfried Bony, starting in place of Tammy Abraham, found the net.

The referee decided that team mate Jordan Ayew had fouled a defender.

Watford maintained their run of having scored at least twice in every away game with a comfortable 3-0 win at Newcastle to consolidate eighth place.

Will Hughes and Andre Gray scored either side of an own goal by American DeAndre Yedlin to secure a victory that further enhanced the credentials of manager Marco Silva, who has been coveted by Everton.