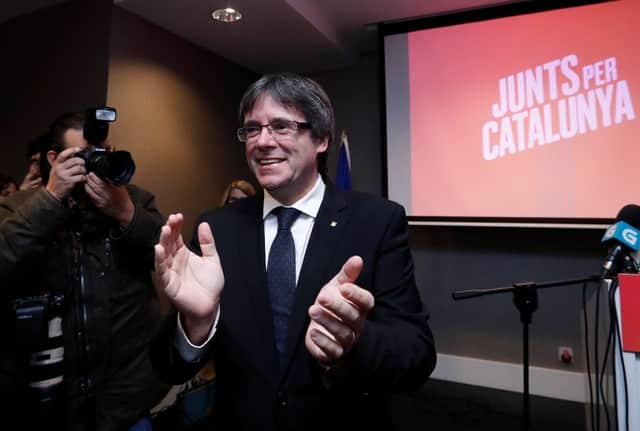 Ousted Catalan leader Carles Puigdemont attends the launch of a campaign for political platform "Junts per Catalunya" ahead of the December 21, 2017 Catalan regional election

Catalonia’s former leader challenged Spain and the European Union to respect the result of Catalan regional elections in December, saying Madrid would have to end direct rule if separatists win.

Speaking from Belgium where he fled earlier this month, Carles Puigdemont said the vote was the most important in Catalonia’s history.

“Will you accept the results of December 21 if the pro-independence camp wins?,” he asked after supporters chanted “Puigdemont, our president” during a speech to unveil his list of candidates for the vote.

“Do you commit to ending (direct rule) if that is the result?” said Puigdemont, the public face of the move for independence who is wanted in Spain for rebellion and sedition.

After dissolving Catalonia’s parliament and sacking the regional government in response to the region declaring itself independent on Oct 27, Spanish Prime Minister Mariano Rajoy said a new election would be held in Catalonia and called on Puigdemont to take part.

Pro-Catalonia independence parties are expected to win next month although they may fall short of a majority of seats in parliament needed to revive the secession campaign, polls show.

“On December 21 we must tell Madrid, the EU and the tripartite support for direct rule that democracy in Catalonia must not be undermined. Never again in Catalonia!” Puigdemont said from the town of Oostkamp near Bruges, part of Belgium’s Flemish region that has its own separatist aspirations.

EU leaders are extremely wary of Catalonia’s search for independence because it has stirred separatist feelings far beyond Spanish borders.

European Commission President Jean-Claude Juncker this month in Madrid called on Europe to reject what he called separatist poison.

A Belgian court has granted Puigdemont conditional release but he is barred from leaving Belgium without a judge’s consent.