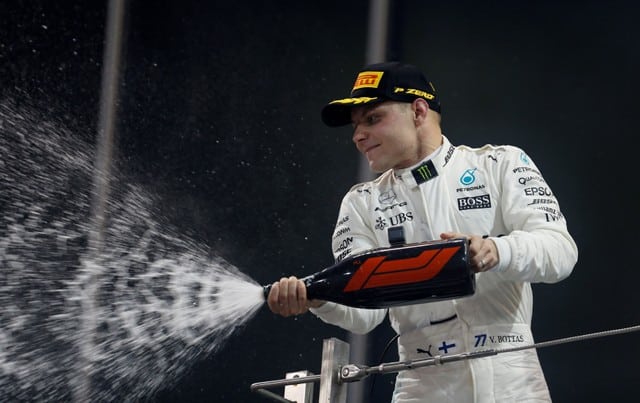 Valtteri Bottas won the Abu Dhabi Grand Prix on Sunday as Mercedes wrapped up the Formula One season with a one-two finish and four-times world champion Lewis Hamilton had to settle for second.

The win was a career third for the Finn, who had started on pole position at the Yas Marina circuit, and denied Hamilton a 10th of the campaign.

“It’s a really important win for me after having a pretty difficult start to the second half of the year,” said Bottas, who joined Mercedes after 2016 champion Nico Rosberg retired abruptly a year ago.

“This weekend, pole and win, I couldn’t be happier to end the season like this.”

In a processional race under the floodlights, Ferrari’s Sebastian Vettel took third place to finish runner-up in a championship that Hamilton won in Mexico last month.

Mercedes had already won the constructors’ world championship for the fourth year in a row and ended with 668 points to Ferrari’s 522. The one-two finish was their fourth of the season.

“After three, four or five laps I couldn’t go any faster and from then it was pretty lonely,” said Vettel, a three-times winner in Abu Dhabi “In the second part of the race we had a stronger pace but not good enough.

“Lewis deserves to win the championship this year. I hate to say it but he was the better man.”

Hamilton kept Bottas in his sights but was also unable to pass. He said that was not because of a lack of intent or team orders.

“Big congratulations to Valtteri, he did an amazing job to hold me off. It was a great race, I gave it everything. It is hard to overtake here,” he said.

With the finishing order reflecting the starting positions, with the exception of Red Bull’s Australian Daniel Ricciardo who retired with an hydraulics issue, the main suspense was in midfield.

Toro Rosso, Renault and Haas were separated by just six points before the start, with millions of dollars in prize money at stake and Renault taking the honours thanks to Nico Hulkenberg’s sixth place.

It was still a tense evening for the French manufacturer team, however, after their Spanish driver Carlos Sainz was released from a pitstop with a loose wheel and retired after almost crashing in the exit tunnel.

There was also an emotional send-off to Williams’s veteran Brazilian driver Felipe Massa, the 2008 world championship runner-up bowing out after 269 starts.