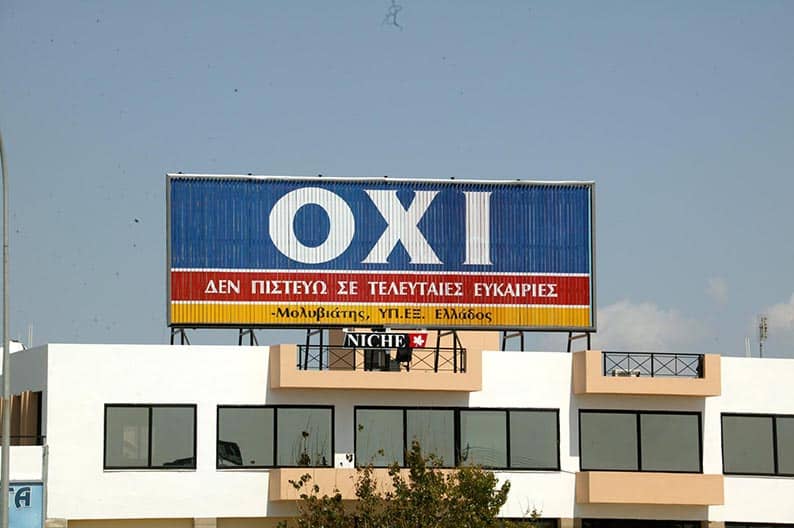 REFERENDUMS are the flavour of our times. There have been referendums galore this century. In Scotland, Crimea, Cyprus and most recently in Catalonia but the mother of all referendums was, of course, the referendum in Britain for Brexit.

As we all know Brexit means Brexit and no deal is better than a bad deal and that is that, and there is not much more to say. The negotiations to leave are tough and the divorce bill is huge but as we all know when the going gets tough the tough get going – back against the wall and the bulldog spirit and all that.

The Scottish referendum was the best referendum. It was done the way independence referendums are supposed to be done. Not only was it authorised by the metropolitan parliament at Westminster, but everyone was relieved when Scotland voted to stay. The Sovereign, whose kingdom was to revert to one queen two kingdoms if the Scots voted out, purred like a pussycat when prime minister Cameron phoned to say that she was to remain one queen of one United Kingdom.

I wonder what he told her when he phoned to say he messed up on Europe because his referendum gamble did not come off and he lost the country £50 billion? Apres moi le deluge probably.

The referendum in Crimea was a bit back to front but it worked in the sense that the Russians returned Crimea to the status she had before communist times. To British ears, Crimea was known for the charge of the Light Brigade at Balaclava and Florence Nightingale. To historians the Crimean War was a War by the western powers – Britain and France – to curb Russian influence in the Balkans in the warm waters of the Mediterranean at the expense of the Ottoman Empire.

In communist times Crimea was an administrative region of the Soviet Union and Soviet leader Nikita Khrushchev – brilliantly portrayed in the film Death of Stalin in a belly fight with KGB Chief Lavrenti Beria to amuse the boss –  decided  to make Crimea part of the Soviet Republic of Ukraine for administrative reasons.

This was fine in communist times and even after the collapse of the Soviet Union so long as Ukraine remained in Russia’s sphere of influence and Crimea a Russian naval base. When it looked as though Ukraine might fall into the arms of NATO and the EU like most of East Europe and the Baltic States, the Russians decided that there should be a referendum in Crimea because apart from the Tatars the majority of the people in Crimea have been ethnic Russians since the time of the Crimean War in the mid1850s.

There was a referendum in 2014 and by a huge majority, the people of Crimea voted to revert to Russia. It is said this was not a legitimate referendum because Russia annexed Crimea first and held the referendum afterwards, and in strict law this may be right and the annexation of Crimea is not legally valid.  But Russia had a very strong case in equity, and international law is not like municipal law. It cannot defy a superpower with equity on her side!

The other referendum result with equity on its side was that of the Turkish Cypriot community in 2004. The referendum results in Cyprus were not just the usual repeat referendums the EU sometimesrequires of states to clothe its constitutional decisions with democratic legitimacy.

The referendums held in Cyprus were like the Brexit referendum. They were dispositive of a political problem that had been festering for a long time – a couple generations in the case of Cyprus. It was the first time the people of Cyprus spoke about how they saw their future together and it as well to ponder the results and what they mean –  better late than never.

It is unnecessary to linger too long on what the Greek Cypriot community meant by voting overwhelmingly to reject a federal solution .  The spirit of the referendum result that launched the struggle for union with Greece in 1950 was transformed into the spirit that gave a resounding OXI to a federal solution in 2004 and that will remain the position for generations. If proof were needed, the failure of the talks at Crans-Montana in 2017 is proof enough.

The referendum result on the Turkish side, however, is worth lingering to ponder deeper. Not just because it was in favour of the reunification under a federal umbrella within the EU, but  also because the idea of having referendums at all was actually done to ensure the Turkish Cypriot community spoke directly to the issue.

Basically, the EU wanted Cyprus to join as one united country because it was absurd for a country to join the land of milk and honey and free movement of everything, as a divided country without free movement internally.

At the time the Greek Cypriots, in the person of President Glafcos Clerides, were on side. But the Turkish leader, Rauf Denktash, was against reunification. However, the Turkish Cypriot community was seemingly in favour of a federation inside the EU. This, the end, was at least one of the reasons for holding the 2004 referendums – basically to bypass the opposition of Rauf Denktash. What no one realised was his opposition had an avatar among the Greek Cypriot leadership.

The other reason for the referendums  is apocryphal but worth recounting. The plan was that there was going to be a roll-up question whereby joining the EU and voting yes to reunification were to be inextricably linked to entice the Cypriots, most of whom were thought to be very keen to join the EU, to vote yes.

In the end as the date of accession passed and Cyprus joined divided. The Turkish Cypriot community has been excluded from the benefits of membership, despite voting in accordance with the wishes of the EU.

That is the paradox that is a lot more paradoxical than even most Turkish Cypriots believe. In form, the referendum of 2004 on the Turkish Cypriot side was not whether to retain the state of affairs brought on by the UDI in 1983 but in substance it was if you think of what the vote was about – to reunite with the Greek Cypriots as a federation within the EU.

At the time of UDI in 1983 the UN Security Council declared  the proclamation legally invalid and called for its withdrawal. On 26 April 2004 after the Turkish Cypriot community voted in favour of reunification the European Council declared officially that it was determined to put an end to the isolation of the Turkish Cypriot community and facilitate reunification.

So far as I am aware the Turkish side is not actively seeking recognition of its 1983 UDI. When consulted in 2004 the people roundly rejected UDI in favour of reunification.

If the UN says UDI is legally invalid and should be withdrawn, and the Turkish Cypriot people in effect rejected UDI in the only time they were given a chance to exercise their right to self determination, and if the EU is determined to put an end to the isolation of the Turkish Cypriot community caused in its wake, the time has come for Turkish Cypriot society to put away the past and reclaim the pledge they handed the EU with their yes vote in 2004.

Protocol 10 of the Treaty of Accession is no bar. Once a comprehensive settlement is off the agenda, in accordance with peremptory norms of international law, the Turkish Cypriot community is entitled to equal treatment without discrimination.

Millennials leading the way in gender politics even in Cyprus

Tales from the Coffeeshop: Makarios Syndrome and the declaration of platitudes