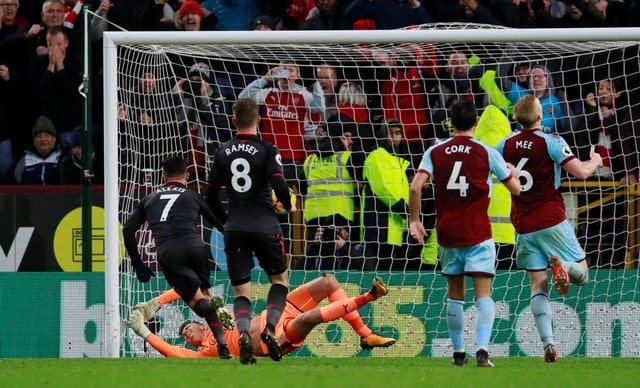 Arsenal's Alexis Sanchez scores the only goal of the game from the penalty spot.

An injury-time penalty from Alexis Sanchez gave Arsenal a 1-0 win at Turf Moor in the Premier League on Sunday to send the Londoners up to fourth place.

It was a close affair throughout with Burnley showing exactly why they entered the game level on points with Arsene Wenger’s side but it ended in controversy.

Arsenal won both games against the Lancashire side last season with disputed late goals and were reminded of that recent history throughout the game by the home support.

Television replays showed that James Tarkowski pushed Aaron Ramsey in the back although the Welsh international’s dramatic fall angered the home support who booed off referee Lee Mason at the end.

“I can understand they are disappointed but from the outside it looks like a penalty,” said Wenger, who said Ramsey had told him it was a “very strong push”.

Arsenal, who were without German playmaker Mesut Ozil because of illness, arrived at the ground late after what Wenger called “traffic problems” and they were slow out of the blocks.

Burnley, on the back of three straight wins and without a home defeat since mid-August, started strongly and went close in the 15th minute when Iceland winger Johann Berg Gudmundsson struck the post after a flowing counter-attack.

Arsenal gradually clawed their way back into the game but they had trouble handling Gudmundsson’s speed and directness down the flanks.

Ramsey missed a good chance when, taking the ball first time from a low cross by Alexandre Lacazatte, he fired over the bar.

Nacho Monreal shot just wide of Nick Pope’s post as the Gunners ended the half strongly but there were few chances in a tight second period.

Burnley’s Belgian midfielder Steve Defour fired over after Robbie Brady had a low shot blocked and although Burnley threw on an extra striker in Chris Wood, they were unable to replicate the pressure that they had created in the opening half.

Then came the late drama with Sanchez keeping his cool to slot the penalty past Pope, end Burnley’s winning run and allow the Gunners to move above North London rivals Tottenham and Liverpool, a point behind third-placed Chelsea.

SOUTHAMPTON 4 EVERTON 1
Charlie Austin’s second-half double, on his return to the Southampton starting line-up, helped to earn his side a 4-1 Premier League win over Everton, whose misery continued on Sunday.

Southampton took the lead at St Mary’s in the 18th minute after Dusan Tadic finished off a fine team move but, just before the break, Everton levelled with a bolt from the blue as Iceland’s Gylfi Sigurdsson thundered a strike from distance in off the crossbar, his first league goal for the club.

The goal did little to settle a nervous-looking Everton and they were soon behind again as Austin, making his first league start of the season, headed home in the 52nd minute before getting on the end of a left-wing cross to make it 3-1 six minutes later.

Captain Steven Davis fired home a late fourth as Southampton strolled to just their fifth home win of 2017 to move them up to 10th in the Premier League table, while 16th-placed Everton’s woes continue and David Unsworth’s chances of getting the manager’s job on a permanent basis were dealt another big blow.