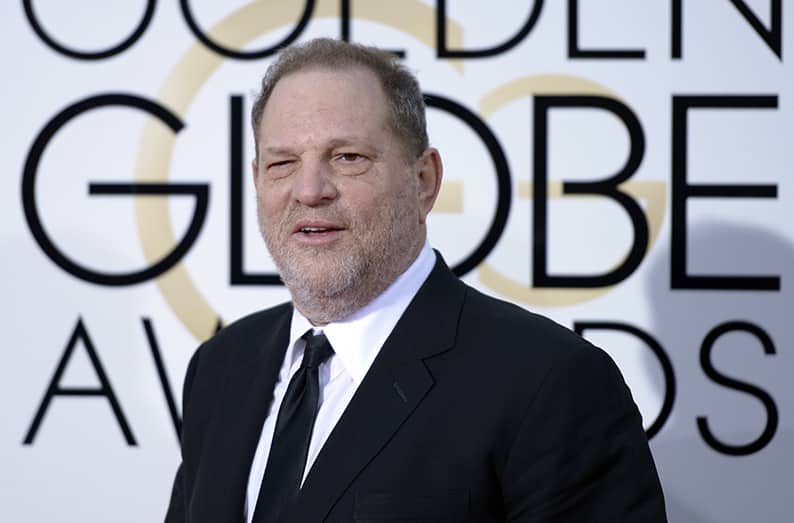 Hollywood producer Harvey Weinstein was fired from The Weinstein Company, which he co-founded, after additional information surfaced concerning his conduct amid accusations of decades of sexual harassment

The week that the Harvey Weinstein story surfaced, I immediately thought – as I guess many women did – of the personal injustices I had endured as a woman.

I thought back to Saturday and Sunday evenings in Paphos on holiday with my family. On hot summer nights after dinner, families would promenade from the castle to the municipal baths. In a constrained society where dating was not allowed and familial reputation could be ruined by a young woman appearing immodest, it was the one and only opportunity for girls to watch boys and vice versa.

Young men would stare at the girls and make gestures or whisper suggestively, carefully ensuring parents did not notice. Occasionally you got your bottom pinched or were brushed against accidentally on purpose. The girls would coquettishly pretend they did not care or notice but always wore their most fashionable clothes and far too much makeup.

Living in London my Greek Cypriot parents had indoctrinated me into thinking that if I dressed in a provocative way I was asking for it …’don’t put the goods in the window if they are not for sale’ my friend’s elderly grandmother told us. It seemed no different with my working-class English girlfriends, dress modestly and do not disgrace the family.

The message I was given was that men could not control themselves so don’t provoke them. If you dress in a certain way you are sending a message and harassment is part of the deal.

But when I discussed the Weinstein case with my daughters, aged 24 and 20, their view was that a woman should be able to walk the street naked, and the response to this choice is entirely in the hands of the perpetrator. They had no time for the view that burglary is wrong but you should still lock the front door as a precaution.

Women’s groups say it is very different in Cyprus where tradition, culture and religion play an important role in preserving the patriarchal structure of Cypriot society. “From education to political representation, from violence against women to sexual and reproductive rights – traditional values and rigid gender roles are pervasive,” says Susana Pavlou, the Director of the Mediterranean Institute of Gender Studies (MIGS).

Yet this is not a Cyprus my daughters necessarily recognise, among their own generation at least. They are very much in touch with their Cypriot roots, spend a lot of time on the island and are very close to their female cousins who are London-educated, liberated Cypriot women. They say they act and dress the same in Cyprus as they do in London.

The caveat to that was the respect they had for elderly relatives who have ‘old fashioned’ attitudes and for them, they will modify their dress and cover up tattoos and piercings. And as far as attention from the opposite sex goes, they see no difference from men of their own age group. It is the older men in Cyprus who make them feel uncomfortable.

My parents in Cyprus still cannot understand the new 21st-century woman. They do not see the Kardashians as modern, liberated businesswomen. My daughters quite admire them. I am unsure.

But even though I have a sneaking admiration for the Kardashians, I would feel better about women flaunting their sexuality if I saw men being as obvious with their bodies in the media as women are.

My sons, aged 28 and 22, take as read that how a woman dresses or behaves has nothing to do with consent. They were scathing of a recent case involving a footballer and a young woman that involved consent while under the influence of alcohol. Both my sons said that if they saw a woman drunk they would call her a cab.

Male Millennials don’t seem as susceptible to the toxic masculine power trip that older men seem to be on. They have seen women outperform them at university and school and they accept that mothers work (as I did) and that no means no.

If unacceptable attitudes towards women are often a generational thing, other factors are at play.

My older daughter had lived with a boyfriend in his flat for a while and had experienced a degree of physical and emotional abuse which she said she tolerated for a while because she feared being homeless.

Maybe that is the key to understanding the dynamics? Who has the power? In this case the power to put a roof over your head. That is Weinstein in a nutshell, he had the power to hire and fire on a massive scale.

According to the EU Agency for Fundamental rights 2016, 22 per cent of Cypriot women over 15 have experienced physical and/or sexual violence.

Socioeconomic patterns play a big role in violence against women in Cyprus, specifically domestic violence. Women who have little to no education and reside in urban areas, are older and struggle financially seem to be prone to domestic violence.

Reports to the police of violent incidents have drastically increased each year. In 2002, 538 cases were reported, whereas in 2008 that number almost doubled to 969 reported cases.

The increased confidence necessary to report violence is, of course, a positive sign. Justice Minister Ionas Nicolaou in 2016 said that the increasing trend to report to authorities all forms of violence against women indicates that the measures and policies implemented both by the state and civil society on prevention, repression, and victim protection have begun to bear fruit.

But some women still subconsciously feel that the only power they have is in their bodies. Maybe as we move on and we acquire financial and political power women will not feel their bodies are a commodity to use as a weapon or a way of grabbing attention or influence in a man’s world.

In Cyprus, although I can see the changes each time I visit, my parents have a resigned disdain for the changes. They still ask my daughters if they have a boyfriend yet ask my sons about their careers.

Weinstein’s demise has given women the confidence to fight against discrimination, harassment and violence. From my conversations with the younger generation I can see that the playing field can only truly change if we have a multifaceted approach. This must include educating and liberating our young men even further from their rigid roles, ensuring political and economic parity for women and smashing stereotypes.

Men are not lascivious fools unable to control themselves and women are not objects.

There will be little Christmas cheer in Nicosia this year