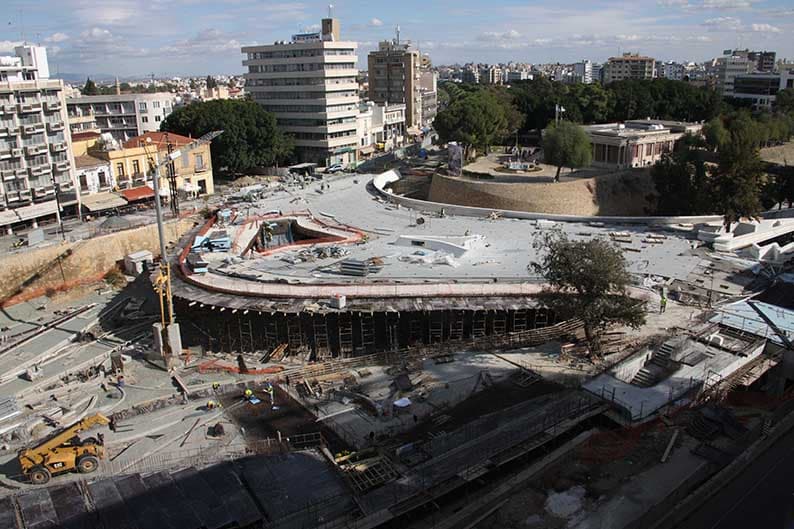 A view of the square looking northwards this week. A foreign expert will have to be brought in to complete certain sections (Christos Theodorides)

Another deadline is looking likely to be missed in the construction of the Eleftheria square, even as the municipality is frantically trying to expedite progress, but at least some of the cost overruns may not end up burdening the taxpayer, the Sunday Mail has learned.

“It is not a matter of dates,” a source close to the project told the Sunday Mail. The latest delay, acknowledged by the municipality’s project director Agni Petridou earlier this week, has been attributed to the contractor’s inability to meet the standards set by the architects on a part of the bridge. A foreign expert will have to be brought in to complete this section, she said.

“The dates are not set by the municipality,” said the source, who spoke on condition of anonymity.

“The municipality’s effort right now is for the bridge and Costaki Pantelidi street to be opened to the public. But actually, contrary to public perception, the project is moving along and is in a course of completion.”

According to Petridou’s statement, a part of the bridge and the road running along the northern side of the square will be opened to the public in January.

In a bid to meet the tight deadlines, the contractor has already committed more than 120 workers on the project, with a report in daily Phileleftheros claiming they had agreed to raise the number to nearly double from now on.

The municipality could not confirm the number of labourers committed to the project.

Added costs, incurred by delays and outsourcing construction of parts of the project will be reviewed by the Central Committee of Changes and Claims, the source said.

The committee is a government body comprising the state treasurer, the auditor general, the head of the European programmes directorate, the permanent secretary of the transport ministry and the heads of various other government departments. It approves or rejects over-budget cost or deadline extensions through a “painstakingly thorough process”.

“It reviews extensive reports highlighting the added cost incurred or deadline missed, it examines both sides’ arguments, and makes a determination on whether they should be approved or not,” the Mail was told.

Asked whether the contractor could assume the cost for being unable to meet the standards set by the architect and causing the delay and the need to outsource construction, the source implied that this could be the case.

“You have to understand, these things are governed by a signed contract that provides for every possible contingency,” the source said.

“Before any part of the project is actually constructed, the architect demands a sample of the contractor’s work. If it is not satisfactory, the contractor is instructed to try again – obviously, if he ends up saying he can’t do it, the cost overrun of getting someone else to do it will end up with the Central Committee of Changes and Claims.”

These things are routine in projects this large, the source said, adding with a chuckle that “in Cyprus, we tend to be a little casual about standards and due process”.

The project’s cost was originally budgeted at €23 million, but following the 2014 withdrawal of the first contractor, it was broken down into two smaller ones: construction of the bridge and square were awarded to another contractor for a budgeted €13.5 million, while construction of a two-storey underground parking lot adjacent to the square was awarded to the same contractor via a different tenders’ process for some €11 million.

By April 2016 mayor Constantinos Yiorkadjis said the projected costs were now €32m, excluding construction of the two-storey parking space but including an EAC substation.
Bureaucratic inertia being what it is, any public project of this magnitude could be expected to run over, both in completion time and budget, but the Eleftheria square particularly proved something of a perfect storm.

At one point or other, everyone involved was blamed of having contributed to the delays – by now almost, if not more than, twice the time initially estimated it would have taken the project to be finished from scratch.

But perhaps the biggest blunder of all through the years is that, despite seeing time and again that it has little control over delays, the municipality insists on cornering itself with hard promises.

“The contractor and the architects are working intensively to implement planning in the best way possible,” Yiorkadjis said in March 2012, announcing the start of Phase 1, which was to last one year.

“We will not stop monitoring and give solutions to any problems that may come up, in order to serve the public as well as possible and make this complex project in our city’s centre a reality.”

Similar promises have been made multiple times since – and broken every time – yet, strikingly, another came this week.

In her statement, Petridou announced a series of “stringent organisational measures” designed to “ensure that there will be no further delays in completing the project”, meaning delivering the bridge by January and the square by July.

This, of course, followed an earlier pledge to deliver the bridge by the end of last summer, and the square by year-end.

Registration of societies and institutions