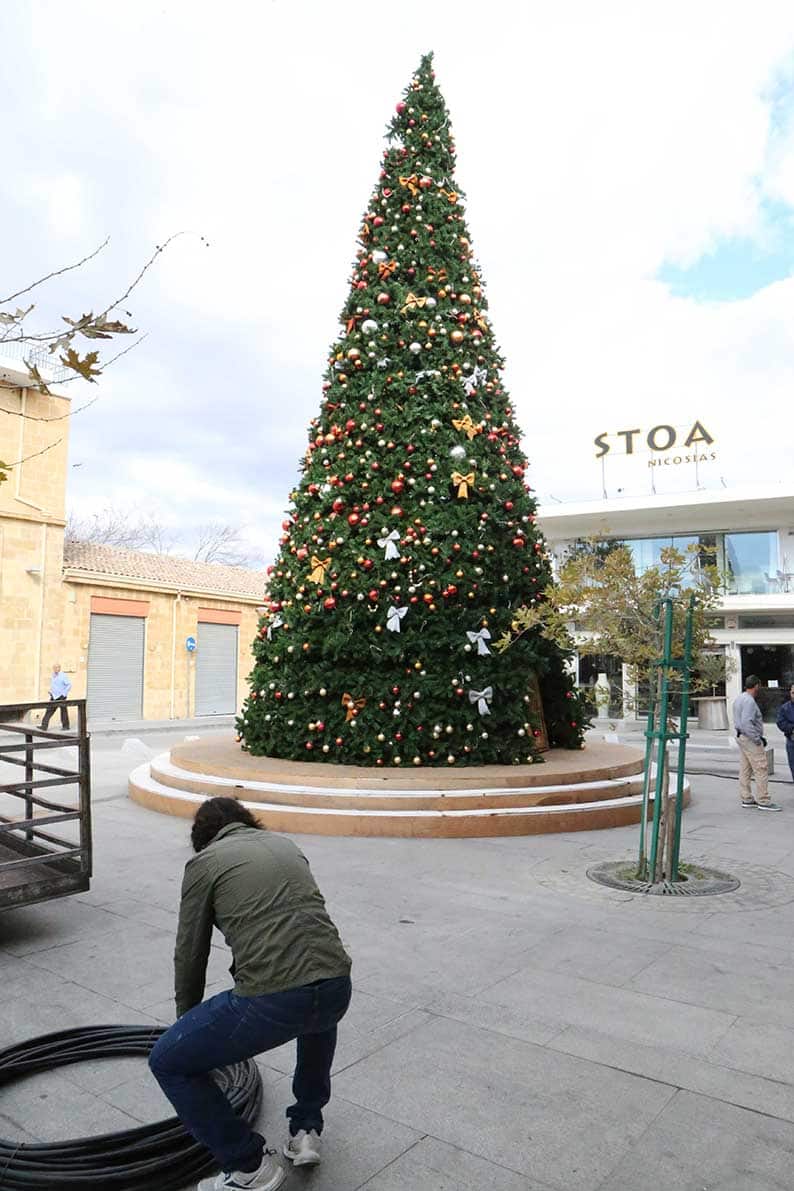 The capital's christmas tree is a plastic cone

The news that Paphos, the capital of waste management scandals, never-ending road works and European culture, is to splash out 130 thousand euros on new Christmas decorations has to be the final insult to Nicosians.

No, in fact, the final insult is that for the sixth Christmas in a row, Nicosia remains divided twice: once by the green line, the second by the works on Eleftheria square.

The top of Ledra Street where old men used to sit on benches under trees is now a narrow, concrete-barriered passageway where people jostle to get by. Access to the wide bridge past the town hall which joined the old city to the areas beyond the walls is a distant memory.

Unless you are prepared for the most exhausting of detours, the only pedestrian access between the two sides has for years been a narrow, hastily constructed, inconvenient metal bridge with so many steps that only the most determined parent can negotiate a pushchair, while wheelchair users have no hope at all.

And in the centre of all that is the massive building site of the square itself, slicing the old and the new city apart. So long have the ‘temporary’ concrete blocks, the fences and the closed roads been in place that Nicosians barely notice them any longer.

Since its highly controversial conception, the project has seen off two mayors with the third into his second stint, two presidents with the third poised for a second term, the original building contractor, and even the architect of the project Zaha Hadid who died last year.

Reasons for the delays have varied down the years. First, archaeological finds, then a dispute with the original contractor which stopped works for months. Many others have centred on ‘technical difficulties’. Surely one of the best was the tussle between the contractor and the architectural office over the correct shade of white concrete on the supports. As if that matters when the first battle after the square opens will be between Antifa and Apoel supporters over who gets to deface its pricey pristine whiteness with graffiti first.

Deadline after deadline has slipped by – the original one was 2012 – and still it is not finished. The completion dates have become such a joke that one Facebook group is looking forward to the square’s grand opening in 2099.

So no Nicosian was surprised this week when it was announced that yet another was on its way, again a ‘technical difficulty’ but that the public will be able to access ‘part of’ the bridge section in January. This time it’s something to do with the correct sloping of the glass on one of the parapets. No surprise either that we need to recruit an expert from abroad.

And perhaps here’s the thing. The Eleftheria square project is a folly, commissioned in the brash, pre-crisis, building boom days when we were determined to cut a dash. A design by the edgy starchitect Hadid – who famously never visited Nicosia – did just that.

There is no point now going back to the debate over the fitness of her concrete-laden design so close to the mediaeval walls of the historic old city. Even those who opposed it the most just want the damned thing finished. In any case, it’s now a concrete fact on a concrete ground, or will be in some as yet undefined future.

But it is clear that executing the plan has been a challenge that we have struggled to meet. Nothing, not one bit of that project should have needed foreign expertise. Import materials, yes. Architectural oversight, yes, because we signed up for that. But the actual construction? Why take on a project you cannot build? And in the process, why make your residents live with a building site for a city centre for so long? Why make tourists question why they bothered to visit?

Which in a strange way brings us back to Christmas decorations. Christmas, I suspect, is not high on the list of priorities in the mayor’s office right now as officials sip away at the poisoned chalice that is Eleftheria square.

The focus of the municipality’s festivities – the lights, the tree, the Christmas market and the events – should be the square, and for yet another year that will not happen.

After a stint in Makarios Avenue since 2013 until the shop owners put a stop to it, the municipality’s Christmas this year has moved to the old municipal market close to what will be the new town hall – one day. So far, that too is just another unfinished project.

Not a bad idea to bring life to what is still a dead part of the old city, but the area is too small and the old market too depressing to see it bringing much Christmas cheer. With real imagination it could work, but the tatty plywood stalls and ageing plastic trees that have been brought out once again do not bode well. And parents should not expect their children to gasp in wonder at our capital city’s main tree – cone-shaped, made of plastic and decorated with baubles from a discount store.

We do not want the extravagances of other capital cities when it comes to Christmas, just some acknowledgement that even Nicosia deserves some festive cheer. The same tired lights brought out year after year on Makarios Avenue and Ledra Street don’t show that, neither does a plastic cone outside a graffiti-adorned empty market.

It seems everything is on hold until Eleftheria square is finished – even Christmas. But 2099 promises to be a good one. In the meantime, we’ll always have Paphos.

A tale of two economies in Cyprus

Millennials leading the way in gender politics even in Cyprus