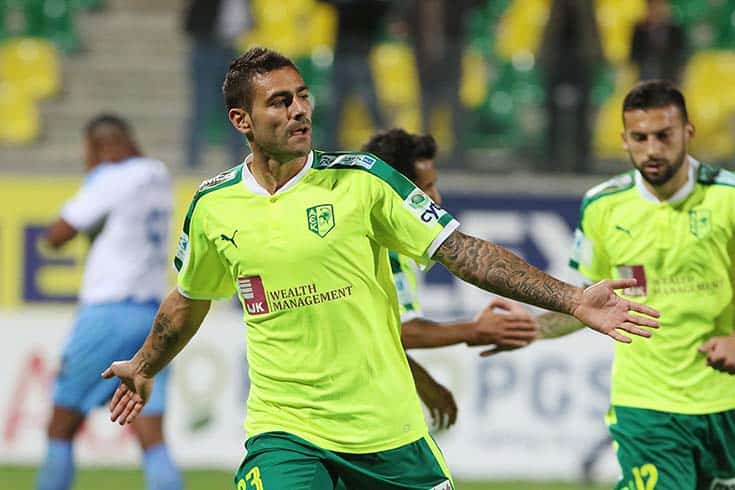 AEK moved two points clear at the top following their hard-fought 2-0 win over Pafos FC as their nearest rivals, Anorthosis, could only muster a draw against AEL in the other big weekend game.

At the other end of the table Nea Salamina and Aris plunged themselves deeper into crisis following defeats at the hands of Alki and Ermis Aradippou, respectively. While champions Apoel continued their surge up the table with a 6-1 drubbing of Olympiakos.

After a lacklustre opening forty-five minutes AEK finally burst to life in the second half against Pafos FC and after getting close on a couple of occasions finally took the lead on the hour mark through the league’s top scorer Florian Taulemmeuse.

Taulemmeuse took advantage of a rare mistake by the visitor’s backline and beat Pafos FC’s goalkeeper Jan Koprivec from the edge of the penalty area.

Larena sealed the points for AEK with a thunderbolt ten minutes later from well outside the penalty area.

Anorthosis and AEL had to settle for a point each at the Antonis Papadopoulos with the visitors clearly the happier of the two.

Anorthosis took the lead in the 12th through Abdullayev, with AEL equalising ten minutes later through their central defender Lafrance.

The home side pushed forward for the three points, especially in the second half, but they created precious little and AEL’s goalkeeper Vozinia was rarely troubled.

They did put the ball at the back of the net three times, but in all cases the ‘goals’ were disallowed for offside.

Alki managed to put a stop to a miserable run of five losses as they defeated Nea Salamina 3-2, who have not won a game since September, when the Famagusta side overcame current table toppers AEK .

Fabricio gave Alki a two goal lead early in the second half while Semedo added a third after following a brilliant solo run in the 86th minute.

Nea Salamina hit back twice in the added minutes but it was all too little too late.

Even though Apoel rested a number of key players, and gave a debut to their rookie nineteen year old goalkeeper Andreas Paraskevas, they had no problems in defeating Olympiakos 6-1.

Embezilio started the route as early as the second minute with Roland Salay and Igor de Camargo grabbing a couple each. Ghayas Zahid got the other while Olympiakos’ only reply came from Castro.

Omonia had to come back from a goal down to defeat Doxa Katokopias by 2-1 with William Soares getting both the goals while in the last weekend game Ermis Aradippou overcame Aris by 2-0 with Emeghara and Imerek of the scorers.

Increased dust in the atmosphere

In upset, opposition overtakes US ally in Honduras election