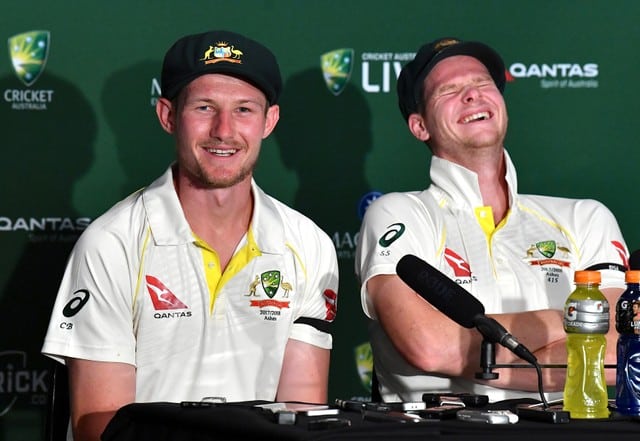 Australia sealed a dominant 10-wicket victory over England before lunch on day five of the series-opening Ashes test on Monday, having chased 170 runs without loss in a blow to the tourists’ pride.

Steve Smith’s team will head to the second test starting in Adelaide on Saturday brimming with confidence after decisively breaking England’s resistance at the Gabba.

Openers David Warner and Cameron Bancroft, having driven Australia to 114 at stumps on day four, needed only 56 runs to complete the win and rarely looked in danger.

Vice-captain Warner finished unbeaten on 87, with Bancroft 82 not out after enjoying a maiden half-century in his test debut.

The pair’s 173-run stand set a record for an unbroken opening partnership in a successful run chase in tests, eclipsing the 172 set by Archie Jackson and Bill Ponsford against West Indies in Adelaide in 1930.

Debutant Bancroft clinched the match in style, smashing all-rounder Chris Woakes to the long-off fence twice to spark a roar from the modest Monday crowd of 6,154.

“It was good fun obviously, to share a good partnership was nice and to get the win in the end was good,” said Bancroft, who later cleared up reports that he had been “headbutted” by England wicketkeeper Jonny Bairstow at a Perth bar in the leadup to the series.

“I got into a very amicable conversation with Jonny and he just greeted me with a headbutt, kind of thing. I was expecting a handshake.”

Four years after thrashing Alastair Cook’s England by 386 runs at the Gabba on the way to a 5-0 whitewash in 2013/14, Australia extended their unbeaten record at the venue against their old foes to 31 years.

With Mike Gatting’s team the last English side to win at the Gabba in 1986, captain Joe Root had said his team were about due for a breakthrough.

And at the end of day three, with the match still in the balance, paceman Stuart Broad said they were the best-positioned they had been in 30 years to win at the ground.

It all smacked of bravado after lunch on day four, however, as England lost 5-40 during a fierce pace assault to be skittled for 195 in their second innings.

Warner and Bancroft then batted superbly after tea to drive Australia to 114 without loss.

Smith was named man-of-the-match for his epic, unbeaten 143 on day three, having pulled his team out of danger at 76 for four in the first innings.

That drove Australia 26 runs past England’s first innings 302 and helped ensure they could still push for the win.

“We performed really well in this game after a shaky start,” Smith told reporters.

“But I think this team has the potential to do some really good things and we’ll have to continue to play really good cricket.”

The game had enthralled for three days as Australia’s fast bowlers struggled to exploit their edge in pace on a surprisingly slow and tepid Gabba pitch.

With the home side’s tails up and their pacemen finding their groove in the second innings, England skipper Root will have a task on his hands to rally his team for the day-night test in Adelaide.

“A lot of time we played some really strong cricket out there,” he told reporters.

“We’ve got to keep believing and trusting the work we’ve been doing, and backing ourselves and backing each other as a group.”