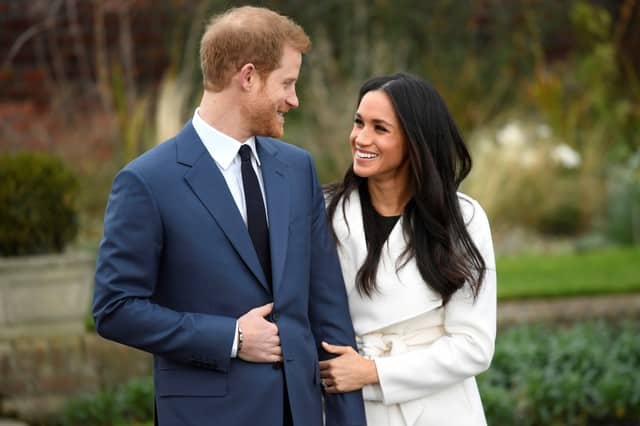 Britain’s Prince Harry said he was thrilled after he and US actress Meghan Markle announced they were engaged on Monday with the couple to tie the knot in the spring of next year.

Harry, 33, Queen Elizabeth’s grandson and fifth-in-line to the British throne, and Markle, 36, best known for her role in the US TV legal drama Suits, got engaged this month in London.

“Thrilled, over the moon,” said Harry as he posed for photographs with his fiancee in the grounds of Kensington Palace in central London where the couple will live in a cottage.

Asked when he knew Markle was “the one”, he replied: “The very first time we met.”

Markle, who wore a white coat, said she was “so very happy” as she clutched her future husband’s arm tightly during their brief appearance. They left with their arms around each other.

She showed off a dazzling three-stone ring, designed by Harry himself with at its centre a diamond from Botswana, which his office said was a place special to the couple, surounded by two diamonds taken from the personal collection of his late mother Princess Diana.

The queen, who had to give her assent for the union, and her husband Prince Philip were delighted, Buckingham Palace said, while Harry also received the blessing of Markle’s parents.

“We’re thrilled. I hope they will be very happy indeed,” his father, heir-to-the-throne Prince Charles said.

Harry and Markle, who is a divorcee, met in July 2016 after they were introduced through friends.

The prince, the younger son of Charles and his first wife Diana, publicly confirmed their relationship months later in a rebuke to the media over its alleged intrusion into Markle’s private life.

But it was not until September that they made their first public appearance together at the Invictus Games in Toronto, a sports event for wounded veterans.

“We’re in love,” Markle told Vanity Fair magazine that month. “I’m sure there will be a time when we will have to come forward and present ourselves and have stories to tell, but I hope what people will understand is that this is our time.

“This is a time of huge celebration and excitement for two people in love and, on behalf of myself, the government and the country, I wish them great happiness for the future,” British Prime Minister Theresa May said on Twitter.

The wedding is likely to attract huge attention across the world, as did the marriage of Harry‘s elder brother William to Kate Middleton in 2011.

“We are very excited for Harry and Meghan,” William and Kate said in a statement. “It has been wonderful getting to know Meghan and to see how happy she and Harry are together.”

In his office’s warning to the media, Harry referred to the sexism and racism directed at Markle, whose father is white and her mother African-American.

“We are incredibly happy for Meghan and Harry. Our daughter has always been a kind and loving person,” Markle’s parents Thomas Markle and Doria Ragland said in a statement.

“To see her union with Harry, who shares the same qualities, is a source of great joy for us as parents. We wish them a lifetime of happiness and are very excited for their future together.”

IN THE PUBLIC EYE

Educated at the exclusive Eton College, Harry‘s teenage years were overshadowed by negative press headlines, fostering an intense dislike which he and his brother harboured because of the way papers hounded their mother. She died in a Paris car crash in 1997 while being chased by paparazzi.

Harry was portrayed as a royal wild child and playboy prince, and in 2002 he admitted smoking cannabis and getting drunk when underage in a pub near the royal family’s country estate amid suggestions he had fallen in with a bad crowd.

He later scuffled with paparazzi outside a London nightclub and drew outrage by dressing as a Nazi officer at a party.

But he turned around his image after joining the army, where he spent 10 years and included two tours of duty in Afghanistan. He said it was a role where he felt he could be himself without media scrutiny or any other trappings of his gilded upbringing.

Even when he was photographed partying naked and playing billiards in a private room in Las Vegas in 2012, the response was less critical and more understanding.

“It was probably a classic example of me being too much army, and not enough prince,” he said of the Vegas incident.

He left the army in 2015 to focus on royal duties and charity work, particularly the welfare of military veterans, and continuing his mother’s work helping those with AIDS, and mental health issues.

His easy-going manner with the public has made him one of the most popular members of the Windsors. That has put him at the forefront of a rebranding of the monarchy as modern and relevant, a far cry from the perception of a hopelessly out-of-touch institution following the 1997 death of Diana.

To coincide with the 20th anniversary of her death this year, Harry opened up about his own trauma at losing his mother at a young age, and was even quoted as saying he wanted out of the royal family altogether.

“I didn’t want to be in the position I was in, but I eventually pulled my head out of the sand, started listening to people and decided to use my role for good,” he said. “I am now fired up and energized and love charity stuff, meeting people and making them laugh.”

Like William’s wife Kate, Meghan will not become a princess in her own right after marrying Harry. However, Harry, like his brother, is likely to be made a duke when he marries, meaning Meghan would become a duchess.

Markle was born in Los Angeles in 1981. Her father was a TV lighting director for soaps and sitcoms and her mother a clinical therapist.

She made her first TV appearance in a 2002 episode of medical drama General Hospital has appeared in a number of TV shows and films, such as Horrible Bosses, but achieved greatest fame for her starring part as Rachel Zane in the ongoing Suits series.

In 2011, she married film producer Trevor Engelson but they divorced two years later. She had her own lifestyle blog thetig.com, which she recently shut down, and like her future husband has become a prominent humanitarian campaigner.

The couple will live in Nottingham Cottage at Kensington Palace.

“I sometimes still feel I am living in a goldfish bowl, but I now manage it better,” Harry said in an interview with a US magazine Newsweek published in June 2017.

“But I am determined to have a relatively normal life, and if I am lucky enough to have children, they can have one too.”