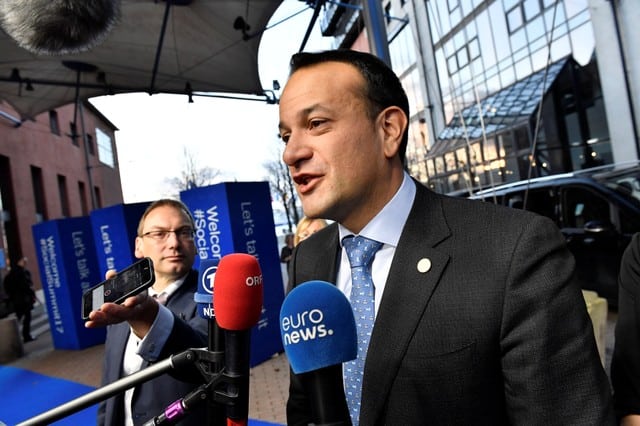 Ireland‘s prime minister and opposition leader resume efforts on Monday to resolve a political crisis that could result in a snap election with implications for a Brexit summit next month.

Prime Minister Leo Varadkar and the head of the main opposition party propping up his minority government are locked in a domestic political dispute that has cast a shadow over the summit on Britain’s plans to leave the European Union.

Ireland will play a major role at the gathering, telling EU leaders whether Ireland believes sufficient progress has been made on the future border between EU-member Ireland and Britain’s province of Northern Ireland.

The border is one of three issues Brussels wants broadly resolved before it decides whether to move the talks on to a second phase about trade, as Britain wants

The crisis is over Deputy Prime Minister Frances Fitzgerald’s handling of a legal case involving a police whistleblower: Fianna Fail leader Micheal Martin plans to move a motion of no confidence in her on Tuesday.

Varadkar has said that if the motion is not withdrawn, he would be forced to hold an election before Christmas, a prospect EU officials say would complicate the EU summit on Dec 14-15 on Brexit

Local media reported on Monday that the leaders were looking at whether passing the issue to an ongoing judge-led tribunal, restructuring the justice department and an apology from Fitzgerald could break the deadlock.

Sources in Fianna Fail and Varadkar’s Fine Gael, speaking to Reuters on condition of anonymity, said a compromise allowing Martin to withdraw Tuesday’s motion remained very difficult meaning Fitzgerald’s resignation may be the only way out.

“Nobody in their right mind wants an election the week before Christmas and we are working hard at a compromise… but it has to be inevitable that Frances Fitzgerald goes,” senior Fianna Fail MP Thomas Byrne told the Newstalk radio station.

However his colleague, finance spokesman Michael McGrath, was less definitive when asked if Fitzgerald would have to quit. Foreign minister Simon Coveney of Fine Gael also struck a more conciliatory tone, accepting his opponents had genuine concerns.

Varadkar has said there is no question of Fitzgerald being asked to step down and she was quoted by the Sunday Independent newspaper as saying she will “not bow to summary justice.”

Coveney also reiterated on Monday that enough progress has not been made on the border issue and that he had the full backing of the EU’s chief Brexit negotiator, Michel Barnier.

Concerns over how the Irish political crisis would impact the talks steadied sterling on Monday, after it posted its biggest weekly rise in more than a month.

“The next couple of months are crucial for the future of Ireland, and provoking an election right now would be utterly irresponsible,” said Kevin O’Rourke, Professor of Economic History at Oxford University, who has written extensively on Ireland‘s role in the Brexit talks.

“The parties can help by agreeing publicly, right now, that the Irish government’s position on the Brexit negotiations won’t change, no matter what the outcome of the election. But an election will mean that our political class will be distracted at just the wrong time.”

Ireland‘s main parties broadly back Varadkar’s position on Brexit and an opinion poll on Saturday suggested an election would lead to little change with another minority administration the most likely outcome.

“What’s clear to me is that the country would not be in any different position after an election than it is today expect our hand at the negotiating table with Michel Barnier would be weakened,” Social Protection Minister Regina Doherty told national broadcaster RTE.

‘No information’ on alleged violation of north’s airspace