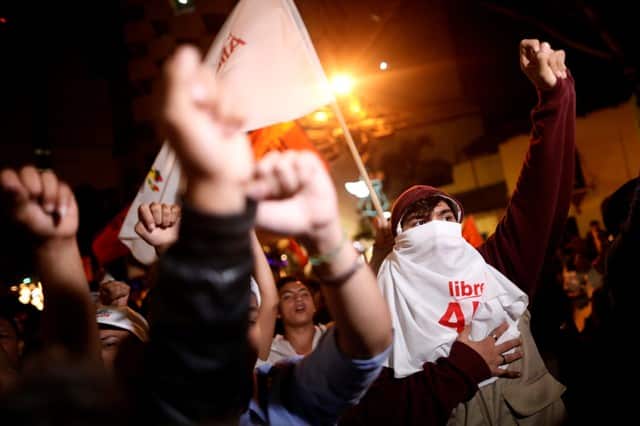 Supporters of Salvador Nasralla, presidential candidate for the Opposition Alliance Against the Dictatorship, sing the national anthem during a rally after the first official presidential election results were released outside at the Supreme Electoral Court in Tegucigalpa, Honduras

A left-right coalition led by a flamboyant TV host took a surprise lead in the Honduran presidential election, initial results showed on Monday, upsetting forecasts that the crime-fighting, US-allied incumbent would comfortably win.

With 57 per cent of ballot boxes counted, Salvador Nasralla had an almost 5 point lead with 45 per cent, the first results showed, when they were released nearly 10 hours after voting ended.

“I am the new president-elect of Honduras,” Nasralla, 64, wrote on Twitter after the results were announced.

Nasralla, who helms the Opposition Alliance Against the Dictatorship, had 45.17 per cent of the vote, while the National Party’s Juan Orlando Hernandez, the incumbent, had 40.21 per cent, according to the country’s election tribunal.

A victory for Nasralla would be a blow for the United States, which sees Hernandez as a reliable ally in tackling drug trafficking, gangs and migration. The United States has longstanding military ties to Honduras and few ideological allies among the current crop of Central American presidents.

The attempt by Hernandez to clinch a second term was divisive in the poor Central American country. Honduras is still trying to overcome the after effects of a 2009 coup that arose after former President Manuel Zelaya, an ally of late Venezuelan leader Hugo Chavez, proposed a referendum on lifting term limits.

Zelaya was at Nasralla’s side on Monday morning. As coordinator and, many believe, the true power in the Alliance, Zelaya would be a major beneficiary if Nasralla wins.

Zelaya was ditched amid fears he was plotting to adopt socialist policies in Honduras, a country where a conservative business class wields enormous power. The United States wrestled with how to handle the coup, and Zelaya remains a bogeyman for US officials and many of Honduras‘ elite.

Polls, including one released after voting ended on Sunday, had shown Hernandez likely to easily win a second term, made possible by a contentious 2015 decision by the Supreme Court.

A non-traditional political figure who has benefited from his entertainment background to build support among those disenchanted by business-as-usual Honduran politics, Nasralla promises to put an end to years of violence, poverty and graft.

Nasralla says he will ask the United Nations to install an anti-graft body, similar to one operating in Guatemala, to probe and bring charges in corruption cases.

He would maintain the Military Police created by Hernandez but wants to start a community police force to work in violent slums. He would also continue firing corrupt national police officers, while hiring up to 25,000 new recruits.

Plans for the economy are vague, but the coalition has proposed lowering sales tax and slashing a Hernandez-imposed corporate levy that has enraged the private sector.

Hernandez, 49, has been credited with lowering a sky-high murder rate, accelerating economic growth and cutting the deficit since he took office in 2014, but has also been hurt by accusations of ties to drug and graft-stained financing and claims he is plotting a power grab.

Parts of Limassol without water due to pipe damage